Synopsis: When her heart is stolen by a seductive stranger, a young woman is swept away to a house atop a mountain of blood-red clay: a place ﬁlled with secrets that will haunt her forever. Between desire and darkness, between mystery and madness, lies the truth behind Crimson Peak.

Do we need another Gothic horror from Guillermo del Toro after ‘The Devil’s Backbone’ and ‘Pan’s Labyrinth’? Depending on your answer to that question, you may find yourself lapping up del Toro’s latest or feeling blasé about it.

Aside from the fact that there is a romance at its core, ‘Crimson Peak’ feels very much a mishmash of over-familiar elements from del Toro’s previous films and other Victorian-era fiction, including the very well-received Showtime drama series ‘Penny Dreadful’. There is a mouldering manse, an aristocratic family hiding a dark and terrible past, and last but not least a young woman who enters both family and house for the first time to discover that all is not well within its crumbling walls. Because del Toro’s idea of homage to the Hammer films of the 1950s and 1960s is not by way of revisionism, his Gothic horror/ romance feels less refreshing than conventional – and that is especially true of its story.

Set at the turn of the last century, it tells of the American heiress Edith Cushing (Mia Wasikowska) who aspires to be an author in the vein of Mary Shelley, much to the chagrin of her publisher as well as her self-made industrial magnate of a father (Jim Beaver). Though her father wishes for her to marry the childhood-friend-turned-handsome-optometrist Alan McMichael (Charlie Hunnam), Edith finds herself falling for the British baronet Sir Thomas Sharpe (Tom Hiddleston). Thomas is visiting with his older sister Lady Lucille (Jessica Chastain) to seek funding from Edith’s father for his ‘clay harvester’, though the latter rebuffs both his invention as well as his Old World status of privilege.

Del Toro, who scripted the film with veteran writer Matthew Robbins, takes his time letting Edith and Thomas fall in love with each other, but because the filmmaker is no specialist when it comes to affairs of the heart, the romance is largely stilted and bordering on cheese. It takes no less than an hour before we finally arrive at the titular haunted house, so named because the clay Thomas mines from the ground below the family property is blood-red and taints both the snow as well as the sunken floorboards. But the crimson is just one aspect of the gorgeous production design which we have come to expect no less of from the Spanish maestro; from the architecture to the stone pillars and arches to the moth-lined walls, del Toro’s imagination and attention to detail is palpable in every frame.

Sans two brief sequences in which Edith’s late mother returns as a black wraith with an ominous warning, the rest of the haunting takes place within the creaky, creepy confines of Allerdale Hall. Maybe it is because the recent bumper crop of haunted house movies have steeled our nerves, but horror aficionados are unlikely to find the ghostly inhabitants that del Toro conjures jolting, notwithstanding his attempt to build genuine atmosphere through a mixture of quiet anticipation and sudden sound cues. Del Toro’s tendencies towards the fantastical also mean that the apparitions are less terrifying than intriguing, consisting largely of skeletal ghouls drenched in some sticky red substance.

Yet a more fundamental issue is the role that these supernatural entities play in the context of the story, which contrary to what you may expect, is much less substantial. Besides rousing Edith from her sleep in the middle of the night to lead her on a tour of the house’s dark corridors and dank basement, these ghosts of Thomas’ past are no more than sideshows to the central plot that has something to do with the sizeable family fortune Edith has been bequeathed following the sudden death of her father which Thomas and/or Lucille may have something to do with (and you probably already know the answer to that). Though it may seem at first that these spirits are trying to protect Edith, that assumption is pretty much laid to rest by the time Edith is in real peril, with the actual danger being (shall we say) more earthly.

That shouldn’t come as a surprise to those familiar with del Toro’s works. Indeed, if there is one thing we’ve learnt, it is that ghosts exist due to attachment to place or emotion, and while frightening in and of themselves, are really not the evil we should be afraid so; instead, what we should be afraid of is the evil which exists in the heart of man, be it greed, lust or envy, each one of which Edith comes to discover within the human companions in the haunted mansion. As admirable a philosophy that may be, it does mean that the story unfolds in largely predictable fashion, which isn’t helped by a dearth of any supernatural presence in the third and final act.

Thankfully, the mortals do mostly fine work with their roles. With her pale, porcelain face, Wasikowska is a perfect fit for Edith, who projects quiet confidence in the first act to wide-eyed horror in the middle to steely determination in the last. On the other hand, Chastain is unfaltering in portraying her character’s psychosis, so much so that there is never any doubt even from her first frame that there is something not quite right with her. Compared to the two strong female leads,   Hiddleston plays it a little too safe as Thomas. One never quite feels how much and why he has fallen in love with Edith, nor fully comprehend just how unhinged he is compared to his older sister. Hunnam is even more staid as the third corner of the love triangle with Edith and Thomas, and is mostly struggling to find a memorable hook for his character.

No matter the strength of the performances, there is no shaking off the feeling that there is something awfully generic about the story as well as the characters. In fact, the same can be said of most of the elements of ‘Crimson Peak’, which like we said at the start, seems as if it were cobbled from tropes and clichés of the Gothic horror romance genre – and the fact that del Toro has put them to more effective service in his earlier films doesn’t help. The style is quintessential del Toro, lush and sumptuous in both mood and visuals, but there is something hollow about the substance within. Depending on how much you like a retread over familiar territory, you’ll either love his latest or find it just a tad underwhelming.

(The sumptuous production design is quintessential del Toro, but everything else feels too much like a slow retread over familiar territory) 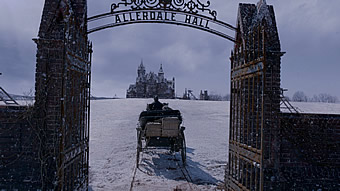 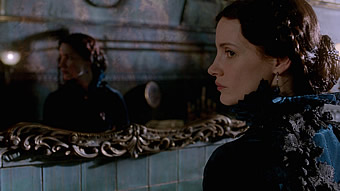 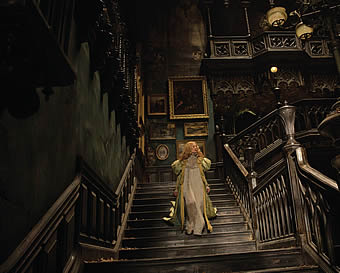