Synopsis: In December 1941, Japan expands the occupation of its neighbouring countries to Southeast Asia. The railway from Tianjin to Nanjing in East China became a key military transportation route, heavily guarded by Japanese soldiers. Railroad worker Ma Yuan leads a team of freedom fighters. Using their in-depth knowledge of rail networks, they ambush the Japanese soldiers and steal their supplies to feed the starving Chinese. With no weapons of their own, the freedom fighters employ whatever tools are at hand, including shovels, loose railway track planks and diverted trains. The local Chinese call the unlikely heroes the “Railroad Tigers”.

If you’ve seen ‘Little Big Soldier’ or ‘Police Story 2013’, you’ll know better than to expect Jackie Chan’s third collaboration with Mainland filmmaker Ding Sheng to be a martial arts showcase of the former’s acrobatic stunts. And sure enough, despite being billed as ‘a Jackie Chan action-comedy blockbuster’, ‘Railroad Tigers’ is really an ensemble piece set against the backdrop of the Japanese invasion of East China in the early 1940s. Based upon true events, Chan plays a humble railroad worker named Ma Yuan who leads a ragtag team from his village to blow up a critical transportation route across the Hanzhuang bridge for the Japanese to send supplies to their troops at the frontlines. Ma Yuan may be leader all right, but the execution and success of their high-stakes mission is ultimately a team effort, meaning that Chan gets as much limelight as his other co-stars, so much so that some arguably end up out-shining him with their skills and/or contributions.

Once again assuming both writing and directing duties, Ding Sheng keeps the premise appealingly simple. Not content to toil for the invading Japanese in their respective jobs, Ma Yuan and his fellow railroad workers as well as a bunch of other working-class village folk take to robbing them every now and then – indeed, it is in the midst of one such daring midday robbery of a passenger train carrying a group of Japanese soldiers and their pillages that the members of the titular ragtag team are introduced via title cards. An Eighth Route army soldier Daguo (Darren Wang) stumbles into Ma Yuan’s modest but cosy village house one night while evading capture by the Japanese, the former recounting how his platoon had tried but failed to detonate the aforementioned bridge. Upon his recovery, Daguo insists on returning to his platoon. Alas, Daguo fails to make it back before being shot by the Japanese, so Ma Yuan decides to assemble the team to complete his assignment – and in so doing, realises their collective hopes of ‘doing something big’ or ‘干票大的’.

Though his previous movies seemed to demonstrate his predilection for character-driven storytelling, Ding Sheng is all out for visual spectacle here, structuring his narrative around a series of extended action sequences – the opening train robbery is an ambitious start that also sets a playful tone, followed by a raid on the armoury warehouse at Shaguo station to procure the explosives needed to blow up the bridge, then a heroic attempt to rescue Ma Yuan and his associate Rui (Jaycee Chan) imprisoned by the Japanese in a square metal cell on board another moving train, and last but not least the loudest, longest and undeniably overblown (pardon the pun) setpiece to hijack a Japanese military transport locomotive intended as the very ‘bomb’ itself. In between are scenes meant to emphasise the camaraderie between the team of revolutionaries, arguably too short and too sparse for any individual character – except Ma Yuan and Rui – to make much impression.

That said, ‘Railroad Tigers’ probably bears the least character work among all of Ding Sheng’s movies so far. Ma Yuan’s status as leader seems premised solely on his age and paternal instincts, and other than hinting at a slow-burn romance with the village pancake seller Auntie Qin, there is little else that defines him. The same goes for the other railroad workers Rui and Dagui (Ping Sang) as well as the other members of the ‘Tigers’ – amateur tailor Dahai (Huang Zitao), handywoman Xing’er (Xu Fan) and serial pickpocketer San Laizi (Alan Ng). Because Chan plays Ma Yuan low-key and unassuming, it is former warlord bodyguard Fan Chuan (Wang Kai) who steals his thunder whenever the latter is onscreen, putting his sharpshooting skills to good use especially during shootouts with the Japanese. Next to the Tigers, the Japanese are defined by the cocky military police captain Yamaguchi (Hiroyuki Ikeuchi), his stern no-nonsense female colleague Yuko (Zhang Lanxin) and to a lesser extent the bumbling station master Sakamoto (Kôji Yano). With the sheer number of characters, it is not difficult to see why there is little time to develop any of them, such that each becomes known by and large by his or her relation to the unfolding narrative. It also makes the Tigers a boring squad of men – and as much as their steadfast loyalty to each other and to the mission is to be admired, the lack of tension between them certainly makes them even duller to watch.

Like we said earlier, the action takes centrestage, interspersed now and then with slapstick gags that do not always hit the mark. Chan’s good-natured goofiness is still amusing, but the humour borders on childish at times, and undercuts the build-up of dramatic tension especially during the supposedly tense and dangerous situations. In fact, an extended gag that sees Yamaguchi consume not one but two drugged pancakes prepared by Auntie Qin which causes him fall asleep while the Tigers act to rescue Ma Yuan and Rui as well as turn lecherous against the male deputy station master held for interrogation is downright farcical – besides raising suspicions of the filmmakers’ disdain towards the Japanese, it also diminishes the intended display of bravery of the Tigers. It is also worth pointing out that a tongue-in-cheek gag which riffs on the physical resemblance between Ma Yuan and Rui (especially their nose, get it?) comes off narcissistic, especially when one takes into account that Jaycee – and not any other one of the supporting actors – gets the most screen time next to Jackie Chan.

It doesn’t matter that ‘Railroad Tigers’ contains next to none of Jackie Chan’s death-defying stunts; in fact, true fans of the martial arts actor should be happy that his films are not solely defined by how high he jumps or how far he leaps. Oh no, Ding Sheng’s latest collaboration with Chan is underwhelming because it seems no more than an excuse for the former to live out his childhood fantasies of trains in a big-budget motion picture, disguising his fancies under a purported celebration of the heroism that a group of ordinary civilians displayed in the anti-Japanese war effort. Ironically, his latest film could have benefitted with more of the self-seriousness in ‘Police Story 2013’ (which was accused of being too sombre), instead of letting the often foolish and even self-indulgent humour dilute the action and drama. Ding’s inspiration is also the Hollywood Westerns of trains and train heists, and on that level alone, ‘Railroad Tigers’ is certainly watchable; but for a Jackie Chan movie, it is undeniably disappointing, not least because Chan doesn’t even get to do much beyond appearing next to his son and/or a whole bunch of other Mainland actors. 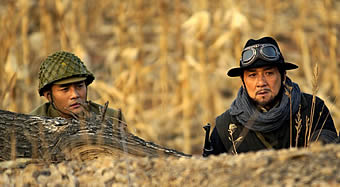 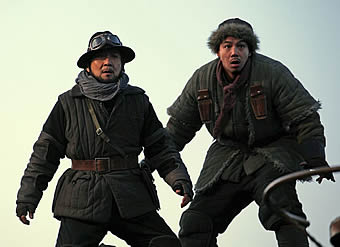