Synopsis: When decorated soldier Captain Colter Stevens (Jake Gyllenhaal) wakes up in the body of an unknown man, he discovers he's part of a mission to find the bomber of a Chicago commuter train. In an assignment unlike any he's ever known, he learns he's part of a government experiment called the "Source Code," a program that enables him to cross over into another man's identity in the last 8 minutes of his life. With a second, much larger target threatening to kill millions in downtown Chicago, Colter re-lives the incident over and over again, gathering clues each time, until he can solve the mystery of who is behind the bombs and prevent the next attack. Filled with mind-boggling twists and heart-pounding suspense, Source Code is a smart action-thriller directed by Duncan Jones (Moon) also starring Michelle Monaghan (Eagle Eye, Due Date), Vera Farmiga (Up in the Air, The Departed), and Jeffrey Wright (Quantum of Solace, Syriana).

This thing about alternate realities has been making us think a lot these days. Concepts of time loop and multiple worlds have left us mystified, if not perplexed, about the possibilities of another one (or even many) of us existing in another space. And what better devices than science fiction thriller movies could we turn to, to explore these beguiling ideas?

After the success of his debut feature Moon (2009), English director Duncan Jones is back to impress us with another engaging production that will leave you wondering about the existence of another you in another time frame.

Instead of a one man show (you have to admit that having Sam Rockwell as the one and only cast member in Moon was an ingenious move), Jones has an ensemble to work with this time. The story’s protagonist is a helicopter pilot whose last memory is a flying assignment in Afghanistan. He suddenly finds himself in a commuter train and has assumed the identity of another man. Eight minutes later, the train explodes and he finds himself in a pod. It is then revealed that to prevent an impending bomb blast, he has to go back in time to relive those eight minutes repeatedly until he finds out the identity of the bomber.

Wasting no time to explain unnecessary details, the thriller plunges into the action from the very first scene. With a screenplay written by Ben Ripley, Jones (also known as the son of rock star David Bowie) has managed to deliver another action thriller that entertains, without leaving the viewers feeling dim witted. The concept of this mode of time travel is fascinating enough to compel audiences – it’s no walk in the park like 1993’s Groundhog Day starring Bill Murray, as our hero is fighting against time to prevent another tragedy from happening. As absurdly outrageous as the plot may sound, the movie still makes you go along for the ride.

One main reason why you’d have your eyes glued to the screen is male lead Jake Gyllenhaal’s on screen charisma. After his somewhat lackluster performances in 2010’s Prince of Persia: The Sands of Time and Love and Other Drugs, Gyllenhaal wants to let you know that he is back in form. Here, he is a man who is on an urgent quest, one that showcases the handsome star’s ability to capture your attention. His commendable performance is complemented by the pleasant looking Michelle Monaghan (Due Date) as a fellow train passenger, the ever reliable Jeffrey Wright (Quantum of Solace) as a scientist with a motive, and Oscar nominee Vera Farmiga (Up in the Air) as an air force captain, who manages to shine despite her role’s limited scope to stand out.

The film has also managed to avoid the trap of being drearily long. Its very serviceable runtime of 93 minutes is enough to leave an impact with your mind. Viewers who are familiar with how the average science fiction or action movies tell their stories will be pleased with how the last third of the film plays out. When the end credits begin rolling, you will be awed by the cleverly inventive script. Without giving away too much, you may also find yourself appreciating how scientific concepts of alternate realities and time travel are essentially humane in nature. 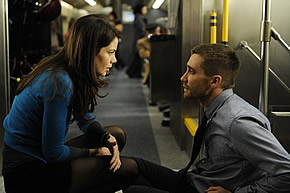 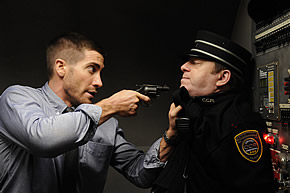 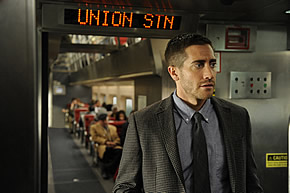 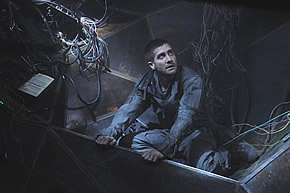