Synopsis: In a dystopian Detroit, abandoned brick mansions left from better times now house only the most dangerous criminals. Unable to control the crime, the police constructed a colossal containment wall around this area to protect the rest of the city. For undercover cop Damien Collier (Paul Walker) every day is a battle against corruption. For Lino (David Belle), every day is a fight to live an honest life. Their paths never should have crossed, but when drug kingpin, Tremaine (RZA) kidnaps Lino’s girlfriend, Damien reluctantly accepts the help of the fearless ex-convict, and together they must stop a sinister plot to devastate the entire city. With stylized action featuring thrilling Parkour stunts (David Belle is the co-founder of this physical training discipline), Brick Mansions puts an entertaining twist on the action genre.

‘Brick Mansions’ will forever be remembered as Paul Walker’s final completed film, the star best known for being one of the leads in the ‘Fast and Furious’ franchise still mourned after losing his life in a single car accident late last year. But were it not for Walker’s death, it would most certainly be his French co-star David Belle’s show instead, for ‘Mansions’ is without a doubt his calling card to Hollywood by giving them a taste of a certain brand of action called parkour.

For the uninitiated, parkour refers to a style of movement which utilises the body’s momentum and maximises objects in the surroundings to enable a person to get around obstacles in the most efficient way possible. Belle happens to be one of the eight founders of the discipline, which was given prominence in Luc Besson’s ‘District 13’ and its sequel ‘District 13: Ultimatum’ that Belle himself also starred in. Yes, ‘Mansions’ is Besson’s English-language remake of his earlier ‘District 13’, with Belle returning to star as the unlikely partner of an undercover cop who wages war against a gang lord.

The names of the characters may have been tweaked a little - Belle’s character, for instance, is now called Lino instead of the original’s Leïto - but the story remains largely the same. Instead of a younger sister, it is Lino’s ex-girlfriend Lola (Catalina Denis) who has been held hostage by the gang lord Tremaine Alexander (RZA) and his men, the former of whom is also the de facto leader of the titular neighbourhood. It is 2018, and within a post-industrial Detroit lies a criminal and junki-littered ghetto that is walled off from the rest of the city and guarded by the military.

A thrilling opening sequence which sets up the personal feud between Lino and Tremaine as the former evades the latter’s henchmen led by K2 (Gouchy Boy) is as awesome an introduction as one can ask for to the art of parkour, which involves plenty of running, climbing, swinging, vaulting, jumping, rolling, quadrupedal movement and the like. Culminating in the detonation of a grenade as Belle leaps across the roof of one building to another, it’s not hard to understand why the setup for Walker’s narcotics agent Damian Collier - that sees him take down the drug kingpin George the Greek (Carlo Rota) - pales in comparison.

The raison d'être for their unlikely partnership is a neutron bomb which K2 has stolen from the city’s authorities that is armed and aimed at downtown Detroit. Logic isn’t the movie’s strong suite of course, and you’d just have to accept that the city’s hopes fall on a lone though decorated cop and an ex-convict. Once you get past that however, you’ll start to appreciate the movie’s small pleasures.

For one, Walker and Belle make a pretty cool tag-team, especially in scenes where they have to rely on each other to get out of a tight situation. The cardboard villains are also suitably over-the-top - in addition to the not so competent K2, Robert Maillet’s appropriately named Yeti is a cartoonish but entertaining foil for our two protagonists. Denis is great eye candy for the male members of the audience, and looks absolutely stunning in a fetish-stimulating kind of way with her uniform getup. But of course, the attraction here remains the gravity-defying stunts, which Belle - and to a far less but no less significant extent, Walker - pulls off impressively. There isn’t much that first-time feature director Camille Delamarre (who probably got the job by cutting his teeth as editor on notable Besson productions such as Taken 2, Colombiana and Transporter 3) adds to the picture, but he does know a thing or two for keeping the momentum of the film going by dialing up the action and keeping the exposition to a necessary minimum.

And really, to expect more of ‘Brick Mansions’ would certainly be unfair, for it aspires to be nothing more than an adrenaline-pumping diversion meant to introduce the grace and fluidity of the sport of parkour to a wider audience. That we can say the movie accomplishes beautifully, as well as in making a star out of David Belle. As for Walker, he does get behind the wheel for a couple of car chases, though some viewers will undoubtedly find that difficult to watch given the manner of his death. Still, it’s as befitting a movie as any to the memory of Walker, but perhaps even more so as solid an introduction as any for his co-star Belle, and in its setting as well as its stunts as distinctive as one can ask for in an urban-based action movie. 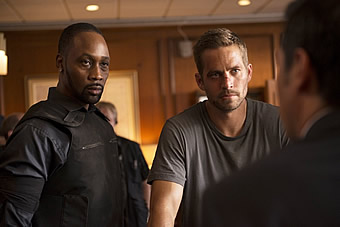 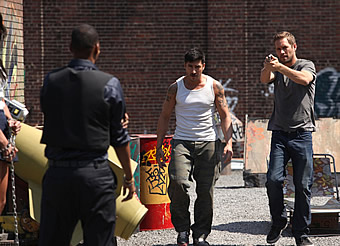