Synopsis: When his wife is kidnapped during a vacation in Istanbul, retired CIA operative Bryan Mills works to get his family to safety, rescue his wife, and take out the kidnappers one by one.

Liam Neeson boasts an impressive filmography, but I guess nothing cemented his bad ass screen persona more so in recent years than Pierre Morel's Taken, where he plays an ex black ops operative hell bent in seeking his daughter who's kidnapped in a foreign land, and pulverizing anyone who dared stand in his way. It's a simple father-daughter story with the dad on a warpath against those who dare violate his sanctuary of family, and admit it, you're probably one of millions of fans worldwide who lapped every moment watching the one man army cut through dozens of thugs in a prostitution ring.

Luc Besson and Robert Mark Kamen continue their story of Neeson's Bryan Mills, spending a good twenty minutes watching him go through the paces of rekindling ties with both his ex-wife Lenore (Famke Janssen) and daughter Kim (Maggie Grace), with Bryan being obsessively cautious about the state of Kim's welfare given their ordeal in the earlier film. They spend time as a family in Istanbul, Turkey, but the families of those he massacred, have set their gunsights on the trio, hell bent on executing their version of revenge. It's deja vu all over again from what you can gather from the trailer.

At one point in the film, Bryan admits he's tired. And in some way, this film was a walk through a similar situation, only for a change in city, and having the stakes increased with all three of Bryan, Lenore and Kim being targets. It's not until the half hour mark that an action sequence ignites for the first time, and even then, director Olivier Megaton, who had the reins of this movie passed from Morel to his EuropaCorp colleague, seemed to be fish out of water in directing fist fights, with the editing not helping, and extreme close ups never doing justice to Bryan's Nagasu Do style of martial arts. Thank goodness that when it switched to Bryan doing what he does best, it involved very lethal and direct gun play, that the lack of fanciful moves was a realistic welcome.

But you probably feel short changed with Besson and Kamen's story, which would have worked better if this was a drama instead, with some token father-daughter, or family bonding scenes proving more interesting than the excuse concocted to stage another kidnapping. Maggie Grace, like Neeson, has grown into her role, and the chance to do something more in a movie that didn't have her do much in the original, adds to the narrative that daddy's little girl has grown up, and is not afraid to take on a little responsibility.

You'd really have to believe the movie logic utilized by the duo in the film, otherwise you'd be frustrated with some glaring logical loopholes. For instance, the villains were more cartoony now, given that they never pick up on lessons learnt by so many James Bond villains, that you should never stage elaborate traps and deaths in having Bryan bleed on the graves of those he dispatched, because this only provides opportunity for escape. This also helps to save costs in not needing to ship three humans across geographies too. And in the guarding of a high profile target who can wipe out an army, you'd better get someone keep a constant eye on the person. And the stress is on Constant. While costs are saved from using the same apartment or room because it's already paid for, it makes it all the more easier to find one's location. And so on.

Still, fans of the original will likely lap this up since it's a logical extension to the story and allowing one to engage in a guilt trip without having to break out the Taken DVD or Blu Ray for a rewatch. There are a few nifty moments in the film to show off how highly trained an operative Bryan is, but other than that, the first film provided a narrative and situations that were much more expansive, than this follow up which seemed like a smaller film altogether. Liam Neeson still shows he got what it takes to kick butt after 4 years from Taken, and that he continues to have something left in the tank to kick some more rear.

(Don't take anything that belongs to Liam Neeson. You have been warned.) 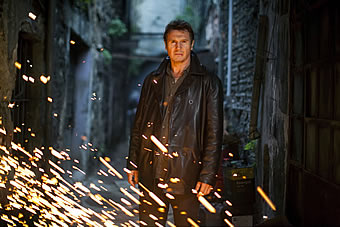 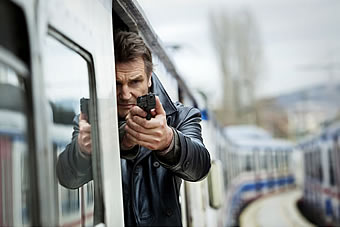 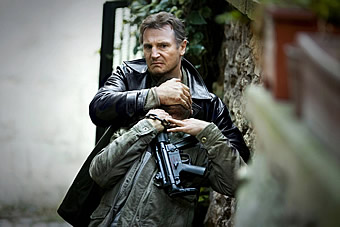