Synopsis: Mirai and Haruna are shooting a show streamed on smartphones which introduces different viewer submitted videos. That day the videos were all of paranormal phenomena, carefully selected alleged accurate accounts of haunted occurrences. In the middle of one video, the image gets interrupted, immediately turning back on to show a footage that was not in the script. The video capture an urban legend rumored at Haruna’s school. A psychic on the show assesses that a certain demonological ritual must be performed in order to rid the school of this phenomena. The director, agents and the two girls go to the school accordingly to find there is more to the video than meets the eye.

The found footage horror sub genre has been introduced in a number of countries each adapting the usual shaky-camera technique and first person perspective, and it's curious to note that Japan, whose horror films champion atmospherics, seem to be falling short and trailing in the adoption of this protocol. Written and directed by Norio Tsuruta, who presented films like Premonition and The Ring 0, P.O.V. perhaps was a case in point that not all cinematic horror films can utilize found footage, coming across as quite artificial in treatment, and riddled with enough plot loopholes that made it seem like a relatively lazy production.

Starring Mirai Shida and Haruna Kawaguchi as themselves, the story revolves around Mirai's television programme that introduces the viewer to video clips submitted by others. For this particular episode it centers on the paranormal, and the submission dwelled upon a mysterious looking restroom in which a cubicle door opens automatically. Soon the girls and their crew get haunted by a mysterious image caught on film, and before you know it, they're going back to Haruna's school, the source of their hauntings, on the advice of a psychic where a ritual is to be performed in order to put a lid on everything. It sounds like a perfect plan, only that nobody discusses about nor assessed the risks involved in getting into the lion's den.

For starters, the cinematography is going to get to you, even for the most patient amongst us. The film spends more than half the time, especially within the school compound, bouncing around everywhere, which works for the filmmakers in keeping production costs low since almost everything can't be caught in focus in the film. One is expected to get spooked by the plenty of fluorescent lights being turned on and off, and shadowy figures who seem to pop up out of nowhere, before disappearing again once they have sent the crew packing and running down in the opposite direction. You hardly get to see anything up close, and efforts were tremendous in trying to keep everything consistent in the mood to chalk up some scares, but I suppose subtlety doesn't quite go hand in glove with found footage.

There's a method to the madness of course, where you will learn in a reveal why this had to be so, and about the usual unfinished business the primary ghoul, a long haired spirit, tends to have a grudge against rather than disappearing into the netherworld. But throughout the mid section where it's supposed to have ramped up in its spooky offerings, you'd tend to feel mildly disturbed by its repetitiveness and lack of focus and direction, before the final third after the faux pas end credits (please don't leave the theatre just yet) showed that glimmer of hope and was actually the saving grace of the film, until it decided to shoot itself in the foot through the lack of logic. It tried to come up with a twist, and it did, but trust me you'd have to suspend disbelief for a bit, especially when it involves solid matter and the passing through another solid matter.

Norio Tsuruta may have wanted to make a film about perspectives, drawing conclusions from how a series of events may be interpreted from different points of view, or vantage points, set up throughout the film. It may come from that of a pre-recorded disc, or through the lens of a camera, either singular or through a series set up to capture from different angles, or even a meta film that draws its edition from multiple sources. The final act was perhaps one that will raise goosebumps for its sitting through almost everything again in a darkened hall that will resemble the cinema the audience is in, with both Mirai and Haruna being pitch perfect for the crescendo, but alas if you'd take a step back and examine things closely, everything will begin to fall apart once more.

(Good while it lasted, but can't withstand further scrutiny) 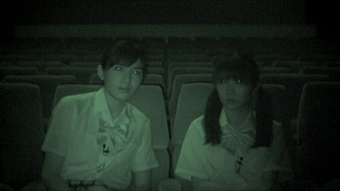 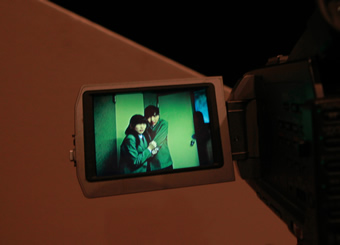 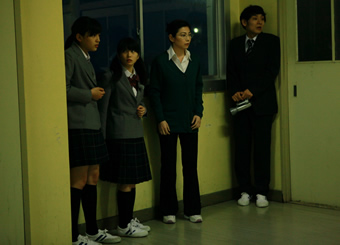 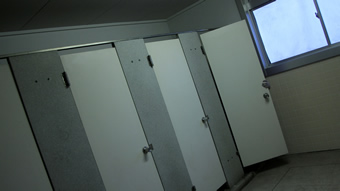