Synopsis: The third explosive chapter of the blockbuster franchise that redefined the spy thriller finds extreme athlete turned government operative Xander Cage (Vin Diesel) coming out of self-imposed exile and on a collision course with deadly alpha warrior Xiang and his team in a race to recover a sinister and seemingly unstoppable weapon known as Pandora’s Box. Recruiting an all-new group of thrill-seeking cohorts, Xander finds himself enmeshed in a deadly conspiracy that points to collusion at the highest levels of world governments. Packed with the series’ signature deadpan wit and bad-ass attitude, “xXx:RETURN OF XANDER CAGE” will raise the bar on extreme action with some of the most mind-blowing stunts to ever be caught on film.

No one had asked for a sequel to ‘xXx: State of the Union’, but given the phenomenal success in rebooting the ‘Fast and Furious’ series, this modest Vin Diesel franchise has been dusted off the shelves for a third instalment. If you don’t already know, the somewhat dubious-sounding title is really the name of a National Security Agency’s covert-spy programme run by one burn-scarred Augustus Gibbons (Samuel L. Jackson), whose maiden recruit was the thrill-seeking extreme sports enthusiast Xander Cage and counts among its legacy ex-con Darius Stone (Ice Cube). As Augustus would have you and Brazilian pro-footballer Neymar know in his wry tongue-in-cheek opening, the ‘Triple X’ programme has been very much alive in the decade since Ice Cube’s Stone took over Vin Diesel’s Cage for the underwhelming follow-up back in 2005.

Before Santos manages to tell Augustus if he wants into ‘Triple X’, a satellite from space comes crashing down on them, brought down by a device known as ‘Pandora’s Box’ that can be used to turn satellites into missiles. Ah, what perfect excuse to lure Xander back from self-imposed exile in the Dominican Republic, which forms the backdrop for an over-the-top introduction that sees him ski down a tall broadcasting tower and skateboard his way through bendy mountain roads with a transformer in order to give the humble local folks free football coverage. The obligatory Government suit here is Toni Collette’s humorless Jane Marke, who tracks him down and hands him an assignment to track down a team of four equally adrenaline-pumped (and therefore deemed highly dangerous) terrorists who have stolen the aforementioned device from right under her nose at the CIA’s New York City office.

Given that it is Donnie Yen’s Xiang who breaks into the said security by leaping off an adjacent building and through the facility’s glass roof, ‘xXx: Return of Xander Cage’ teases a potential showdown between Vin Diesel and series newcomer Donnie Yen – which we’d be honest was as exciting as waiting for the one-on-one between Vin Diesel and Dwayne Johnson in ‘Fast and Furious 5’. Yet, for the benefit of those harbouring similar expectations, that promise is never quite fulfilled, not least because of a mid-act twist by writer F. Scott Franzier that effectively takes the sting out of their supposed rivalry. Without spoiling anything, let’s just say that neither Cage’s other team members – sharpshooter Adele Wolff (Ruby Rose), professional ‘demolition’ driver Tennyson (Rory McCann), IT expert and deejay Nicks Zhou (Kris Wu) – nor Xiang’s – Serena Unger (Deepika Padukone), Hawk (Michael Bisping) and Talon (Tony Jaa) – end up being memorably at odds with one another.

Oh yes, if you haven’t already guessed, this instalment is really a thinly disguised reboot of the franchise as an ensemble – and so much like how Diesel’s Dominic Toretto was the de-facto leader of the team in the more recent ‘Fast and Furious’ additions, his Xander Cage assumes a similar role rallying his ‘Triple X’ cohorts together against a bunch of hawkish insurgents within the US Government who want the device as their own ‘nuclear football’. If their rapport isn’t quite as infectious, it is partly because the supporting cast isn’t quite as charismatic in their own right as that in ‘Fast and Furious’ (there’s no one here that even comes close to the sheer comic relief of Tyrese Gibson and Chris ‘Ludacris’ Bridges) and partly because there is hardly enough narrative space for each side character to define his or her own personality. As it is, most of the attention is spent developing the pseudo tension between Cage and Xiang and the genuine sexual tension between Cage and Serena.

Not that each does not offer up its own unique pleasures – especially during the final act, Diesel and Yen have great rapport between them, which to fans of the latter (us included) is reassurance that he is not simply some token big-name Asian inclusion; in fact, it is Yen’s lightning-quick gongfu moves (marred by some hyperactive editing) that steals the spotlight from Diesel’s showy but ultimately unrealistic daredevil stunts. Padukone’s fans too can rest easy; not only is the actress never asked to justify for speaking in her native English accent, she pretty much holds her own next to Diesel when it comes to butt-kicking. On the other hand, Jaa is lost amidst the noise and fury, and even more so than in ‘Furious 7’ gets a thankless bit role with his hair dyed blond and little more than a cheeky demeanor to show for. It should also be said that Ice Cube’s cameo is milked for as much as it is worth, showing up at a critical moment that will surely have you cheering. 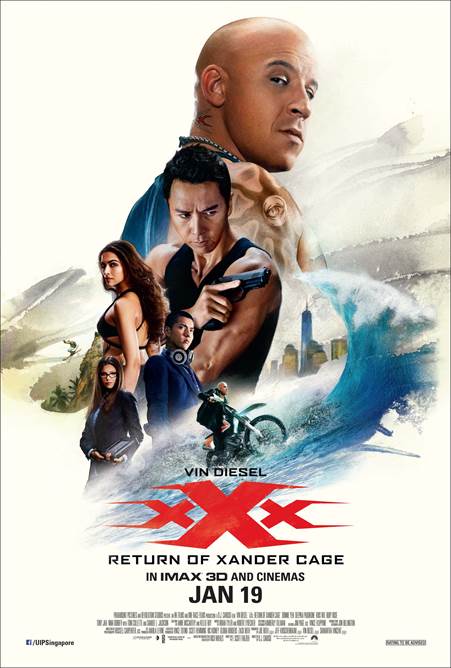