Synopsis: For years, there have been documented cases of UFO sightings around the world - Buenos Aires, Seoul, France, Germany, China. But in 2011, what were once just sightings will become a terrifying reality when Earth is attacked by unknown forces. As people everywhere watch the world's great cities fall, Los Angeles becomes the last stand for mankind in a battle no one expected. It's up to a Marine staff sergeant (Aaron Eckhart) and his new platoon to draw a line in the sand as they take on an enemy unlike any they've ever encountered before.

Think “Saving Private Ryan” crossed with “War of the Worlds” without any of their subtlety and you’ll get an idea of what kind of a movie “Battle Los Angeles” is. Indeed, Johnathan Liebesman’s sci-fi war movie hybrid is loud, frenetic, and offers no apologies for being in-your-face for a whole two hours. It is a movie that aspires to be nothing more than a well-made B-grade action movie- and on that count alone, it succeeds tremendously.

Liebesman and his screenwriter Chris Bertolini have little interest in character development and for that matter story, spending only a modicum of time sketching both out in bold and blunt outlines. Through news reports, we are told that what appeared at first to be a meteor shower across several major cities around the world quickly turned out to be an extraterrestrial invasion, and among the cities targeted is Los Angeles where the action- as the title of the movie clearly suggests- will be set.

Whereas the definitive movie of its genre “Independence Day” was concerned with the big-picture scenario, Liebesman’s film turns out to be much more intimate in scope, focusing resolutely on a group of Marines led by the grizzled battle-weary staff sergeant Michael Nantz (Aaron Eckhart) sent to rescue some civilians trapped in a local police station. As a sign of how much it cares about its characters, the film spends only the first fifteen minutes explaining its stock of stereotypical characters.

Among others, there is the young inexperienced lieutenant (Ramon Rodriguez), the Marine battling a psychological problem (Jim Parrack from HBO’s True Blood), the fish-out-of-water rookie (Noel Fisher), the Marine harbouring a grudge against Nantz for losing his brother overseas (Cory Hardrict) and the tough ethnic female (Michelle Rodriguez). These traits are all but token in nature, and throughout the film these characters remain essentially one-note and indistinguishable otherwise.

All is well perhaps, since war hardly has any favourites. Besides Nantz, it’s pretty much anyone’s guess in which order each one of them will be taken out in the name of some fierce battle against the invading species. Add to that list Michael Pena and Bridget Moynahan, the two adults among three other children whom Nantz and his men locate at the station. Besides extraction, their other order of task is to get to safety before the air force blows the shits out of the Santa Monica coastline.

So they run, shoot, hide, rinse and repeat while engaging in urban warfare, staged intensely and exhilaratingly by Liebesman along the streets of LA, inside its low-rise buildings and even on its freeway. Liebesman’s choice of shooting this faux-documentary style makes the movie seem like a first-person shooter game at times, but works brilliantly in placing you right in the heart of the action. Though it is a little too fond of close-ups (which make the occasional medium- or long-shot extremely gratifying), Lukas Ettlin’s gritty handheld cinematography knows when to stop moving and does a surprisingly competent job at keeping the action lucid for its viewer.

Credit also goes to production designer Peter Wenham and the special effects team behind the numerous apocalyptic shots of LA. Wenham strives for the utmost degree of realism here and mostly accomplishes in creating a terrifyingly plausible picture of the carnage and destruction of the city were such an attack to take place. The visuals go a long way in shoring up the credibility of the film’s relentless gung-ho combat action against which it is set- especially amidst Bertolini’s stilted and sometimes laughable dialogue.

But those looking for all-out action are not likely to mind, since Liebesman shows that he is perfectly capable in overcoming these flaws with the kind of gripping action more typically seen in war movies. As with that independent alien movie “District 9” which singlehandedly revived the genre, “Battle Los Angeles” aims for a high degree of realism and largely achieves it admirably. Of course, it isn’t even close to being as smart as that film, desiring to be no more than that shot of adrenaline action junkies crave for. In this respect, if you take it for what it’s worth, you’re bound to enjoy it. 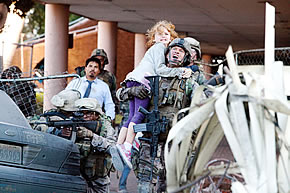 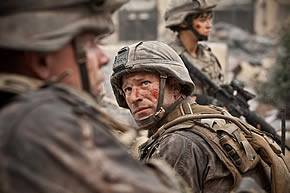 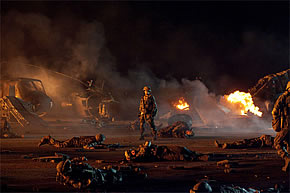