Synopsis: A young woman who, along with her boyfriend, is in desperate search of the perfect starter home. After following a mysterious real estate agent to a new housing development, the couple finds themselves trapped in a constantly changing and yet frustratingly identical suburban neighborhood.

Given what’s happening in the world now, its plotting of a young couple being confined to their home is no doubt uncanny, but you’d appreciate ‘Vivarium’ a lot more if it actually had something meaningful to say in the first place.

Imogen Poots and Jesse Eisenberg play the aforementioned couple Gemma and Tom,  the former a grade-school teacher and the latter a handyman who are looking for a place to settle down. Their casual house-hunting leads them to an encounter with the queer property agent named Martin (Jonathan Aris), who goads them to visit a new suburban housing development whose location is “near enough and far enough”.

At Yonder (no kidding), Gemma and Tom are met with one identical mint-green house after another, each with a street lamp, a tiny tree and a brick wall in front, and an adjoining fenced-in yard at the back. It is also seemingly endless, stretching out as far as the eye can see under a perfectly sunny sky with candy-floss like clouds.

After giving them a tour of house #9, Martin vanishes without a word. But even more peculiarly, their attempt to drive out of Yonder lead them back to the same house, again and again. There is also no phone or Internet connection, so they are literally cut off from the outside world. There is no other occupant in any of the neighbouring houses, and therefore no one to call for help.

Not long after though, they are presented with a cardboard box on the street in front of house #9; within are supplies of food, such as vacuum-packed shrimp, lamb chops and cardboard boxes of milk. As if it isn’t clear that someone wants them to stay, the next box contains a baby with a message – “raise the child and be released”.

Anyone who has seen a Twilight Zone episode will know that the child is far from normal, and indeed while human in appearance, the baby grows at phenomenal speed to become a young boy (Senan Jennings) of around 10 by about the hundredth day. Though she resists her maternal urges towards the boy at the start, Gemma soon finds herself succumbing to her empathy towards it, especially as Tom becomes obsessed with digging a hole in the front yard to find out what lies beneath.

The metaphor should be obvious to those familiar with such science-fiction, but neither director Lorcan Finnegan or writer Garret Shanley seem too interested in Tom’s predicament; instead, the focus is on Gemma, whose relationship with the boy is intended as satire on how draining it is to raise a child, and/or perhaps how that stress takes a toll on young couples (thus exacerbating their first-time homeownership woes), and/or even how domesticity sucks the life out of everyone.

That we are never sure what the film is trying to say speaks of how blunt the allegory ultimately is, so much so that you’ll be left wondering by the end what exactly it is trying to say in the first place. Not only is it less than compelling, the storytelling also turns less and less engaging over the course of the film, especially as the boy settles into a pattern of screaming at random intervals and parroting his parents.

It doesn’t help that there isn’t much attention paid to character development at all, such that we cannot fully appreciate just how the alien child takes a toll on their relationship and even their very sanity. Poots and Eisenberg make the best of their thinly written roles with a clever mix of resignation and desperation, but cannot quite disguise the fact that Gemma and Tom are just too banal for us to root for them. Even as the very point of the movie is intended as metaphor, you’d have needed to know these characters better for this two-hander to work.

Like many of its forgettable genre predecessors therefore, ‘Vivarium’ starts off intriguing but cannot quite build its high-concept premise into something truly gripping. Not only does it fail to fully settle on a single message, it also fails to move beyond synecdoche to tell a story we’d be interested to follow. So despite a strong leading duo and some impressive work by production designer Philip Murphy in creating a vision of dystopian suburbia, you’ll be left wanting by this journey to Yonder.

(Too much metaphor and too little development, plot and character-wise, leaves this visit to dystopian suburbia an ultimately underwhelming journey to Yonder) 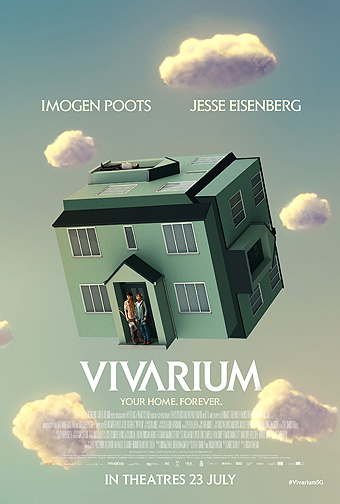