Synopsis: A mysterious viral outbreak pushes Korea into a state of emergency! As an unidentified virus sweeps the country, Korean government declares martial law. Those on an express train to Busan, a city that has successfully fended off the viral outbreak, must fight for their own survival. 453 kilometers from Seoul to Busan, the struggle to survive by those who have others to protect, get on board to stay alive!

So many zombie flicks have come and gone in recent years that each new one which comes along often seems indistinguishable from the horde that have come before it. And yet, Korean director Yeon Sang-ho’s live-action debut easily overcomes such genre ennui by being one of the most exhilarating apocalypse horrors in a long while, with a shot of class warfare allegory added in for good measure.

The set-up is lean and effective. Somewhere in the verdant hills of Jinyang, a deer flattened by a truck which crosses into a militarily quarantined zone springs back to life and hops onto its feet. Within the same day, the self-absorbed hedge fund manager Seok-woo (Gong Yoo) will end up promising to take his neglected daughter Su-an (Kim Su-an) to see her mother in Busan despite his initial reservations, after botching her birthday present (he forgets he has already gotten her a Wii) and missing her class recital.

Not surprisingly, it is this paternal bond between father and daughter that provides the strongest emotional anchor amidst the chaos, as Seok-woo finds himself on board an early-morning KTX train bound for Busan. The rest of the key supporting characters are introduced in simple brushstrokes – the coarse but good-hearted working-class bruiser Sang-hwa (Ma Dong-seok) and his pregnant wife Sung-kyung (Jung Yu-mi), a pair of elderly sisters, a homeless stowaway, the high-school baseball star Young-guk (Choi Woo-sik) and cheerleader Jin-hee (Ahn So-hee), and last but not least the obnoxious bus-company corporate weasel Yong-suk (Kim Eui-sung).

Just before the train shuts its doors, a vividly unwell young female stumbles onboard, a vector for unleashing the chaos that Su-an glimpses at the top of the steps leading to the platform as the train pulls out of the station. In no time, this same last-minute passenger is taking the jugular off a female conductor, and we soon realise the breed of zombie that the humans on board will have to contend with.

These are not the slow walking undead; oh no, they are of the ’28 Days Later’ or ‘World War Z’ variety – fast, focused and ferociously violent. Like the roadkill we witnessed coming back to life, infection spreads swiftly, and the bitten twitch into dead-eyed flesh-eaters within seconds. Those lucky enough to escape the initial wave of bitings end up cloistered in the carriages towards the back of the train, after discovering that the zombies hunt by sight and do not quite know how to open the doors separating the carriages manually.

Through a series of tense, exciting and brilliantly staged sequences, we are further introduced to the other rules of the game – that the zombies hunt as a herd, and that they are pretty much blind in the dark. An ill-fated stop at Daegu station where the train conductor has been advised the military has set up quarantine forms the basis for a middle-act centerpiece that not only promises the jaw-dropping sight of hordes of zombies falling off of an overhead bridge onto the roof of the train, but also divides the remaining survivors into opposing camps.

It is through this division that Sang-ho brings the social commentary of Park Joo-suk’s script into sharp focus. While Seok-woo and Sang-hwa risk their lives to save their respective family trapped in one of the bathrooms, those who were more fortunate to escape relatively unscathed into the carriages towards the front decide to barricade themselves in, thus setting up the distinction between the characters who would do what it takes to save others and others who are only concerned about their own survival.

The progression by which selfishness sets in amongst members of the latter camp as well as the eventual denouement of the characters in both camps is a poignant reminder and lesson on egocentricity. Yes, it is the human drama that keeps the thrills from becoming rote, especially because we not only root for who lives but also who dies and the manner in which they do. That’s not to say that the heroic ones will indeed be spared, so consider this as fair warning that while they may outlast many of the other passengers on the train, there are a fair number of heart-breaking moments which prove fate has no favourites.

Speaking of finish, the finale opts for a literal change of pace by forcing the survivors to abandon their express train for another locomotive when they encounter a derailed carriage on their track at the station just before Busan. It is as action-packed and suspenseful a conclusion as it gets no doubt, complete with a CG money shot that sees hordes upon hordes of zombies piling onto each other and coalescing into a chain at the back of a departing head train as it pulls away from the melee with whoever is left alive (and one half-so if we may add).

With credit too to a committed cast who do their best to bring out character from their respective archetypes, ‘Train to Busan’ succeeds as a pulsating thriller that exemplifies the best of the genre, balanced on a knife-edge of edge-of-your-seat moments and terrifying action with sprinklings of comic relief and a generous dose of social critique. It doesn’t so much as reinvent familiar genre tropes as present its own confident spin of them, but as long as the results are as electrifying and intense as this, we’re sure genre fans will be more than pleased to hop on.

(Breathtakingly paced and poignantly staged, this battle between the living and the undead is a non-stop thrill ride that zombie fans will be more than pleased to hop on) 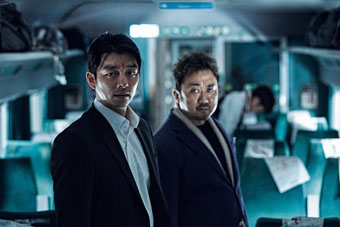 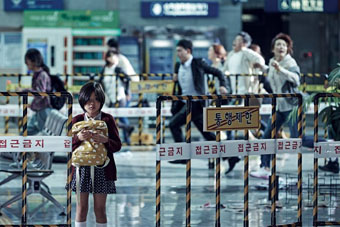