Synopsis: Ok-boon is brought into a great mansion, where mysterious deaths have occurred, and meets Madam Shin, the lady of the house with a great secret. Madam Shin tells Ok-boon the rules she must obey by while in the house. Later, Ok-boon must face the terrifying truths beyond imagination. The dead begins to cry out loud! If you want to live, cover your ears!

No, we haven’t seen the 1986 original that was apparently one of the scariest Korean horror movies ever made, but judging from this 2018 remake, we suggest that you might want to seek that version out instead. The story of a female peasant Ok-boon (Shon Na-eun from the singing group A-pink) whose hand in marriage is sold to a rich family’s third son and comes to discover its dark secrets, ‘The Wrath’ is ultimately undone by its own excess, incoherence and self-importance. In fact, it tries so hard to make you jump that it ends up having exactly the opposite effect, so much so that even the faint-hearted will probably find themselves having a chuckle at how ridiculous it sometimes gets.

In part, that has to do with writer Park Chae-bum’s feeble script that very quickly runs out of steam. Ok-boon’s key antagonist is the family’s matriarch Madam Shin (Seo Young-hee), who lays down three ground rules when she first arrives and warns her that violating them is punishable by death; among them is an instruction not to enter the store house where the household’s food supplies are kept, and it doesn’t take a genius to guess that there is something sinister behind those locked doors. Anyhow, it isn’t long before Madam Shin is possessed by some evil spirit that travels through the residence under the cover of a dense fog at night, becoming the vessel through which the spirit seeks its revenge on those who had done upon it some grave injustice.

That revelation is saved for the beginning of the third act, and to get to that point, director Yoo Young-seon pads the story out with the occasional presence of a shaman Hae-chun-bi (Lee Tae-ri). On one hand, Hae-chun-bi gets a laughable introduction in which he vomits a copious amount of ink black fluid upon stepping into the residence; on the other, the good-looking Lee is miscast in the role as an all-powerful shaman, so either way, it’s hard to take the character seriously. Ditto the high-ranking Joseon official played by Choi Hong-il, whom Ok-boon stumbles upon locked up in the back of the aforementioned shed and whom is subsequently restored as the head of the family – not only is it not clear just what he is after, the relationship between him and Madam Shin is never quite defined.

Both are therefore weak assists for Ok-boon and Madam Shin, who themselves are in need of more compelling definitions. The film wants us to know Ok-boon as a tough and resilient individual who would rather face the horror than run away from it, but hardly gives her enough space to prove her courage, often portraying her as blessed with some immunity that prevents the spirit from harming her. And because Madam Shin gets possessed much earlier on, you’re never sure whether what she does is of her own doing or that of the spirit’s. Without better characters, the film ends up flailing in its search for purpose, motivation and even just plain logic, settling instead for jump scares that only betray its cluelessness.

It doesn’t help that Yeo’s techniques seem more befitting of a retro horror film, than a modern-day remake. Scenes of evil lurking outside the residence are portended with a bright red light outside the windows, and what is meant to pass as blood comes off like cheap puddles of curdled liquid. There is also much to be desired of Kwak Sang-hoon’s cinematography, whose use of Dutch angles and rough camera movements arguably takes the audience out of the scene than immerse one within it. His use of infra-red during one of the climactic scenes also comes off gimmicky, and seems incongruous with the rest of the movie.

Much has been said back in its home territory about Shon’s amateurish acting, and while the role could certainly have benefitted from a stronger performer, her thinly written character does her no favours. Even a veteran actress like Seo is reduced to pursing her lips most of the time as Madam Shin, which goes to show that the fault isn’t entirely Shon. They and the rest of the actors are trapped in a film that calls for them to keep a straight face and play it serious when the whole treatment is itself pretentious and risibly overdramatic.

We’re not quite sure why the filmmakers attempted a remake in the first place, or how this compares with the original; suffice to say that we found little reason for this version to exist at all, not even for the novelty of watching a horror film unfold in a period Korean setting. From the inept execution, to the clumsy plotting, and right down to the subpar visual and practical effects, ‘The Wrath’ is probably one of the worse Korean horror movies we’ve seen in a while. It’s entertaining all right, but mostly because it ends up being unintentionally funny, so if you are looking for a horror/ comedy (not horror comedy, mind you), then you’ll probably enjoy the histrionics on display here.

(An excess of blood, jump scares and over-acting, coupled with illogical plotting and thinly written characters, makes this histronic horror entertaining for mostly the wrong reasons) 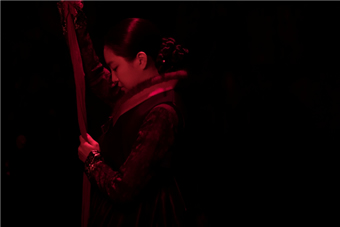