Synopsis: From director Terrence Malick ( BADLANDS , DAYS OF HEAVEN, THE THIN RED LINE, THE NEW WORLD) comes a thought provoking film experience. His fifth film, THE TREE OF LIFE, is a hymn to life, excavating answers to the most haunting and personal human questions through a kaleidoscope of the intimate and the cosmic, from the raw emotions of a family in a small Texas town to the wildest, infinite edges of space and time, from a boy's loss of innocence to a man's transforming encounters with awe, wonder and transcendence. An impressionistic story of a Midwestern family in the 1950's, the film follows the life journey of the eldest son, Jack, through the innocence of childhood to his disillusioned adult years as he tries to reconcile a complicated relationship with his father (Brad Pitt). Jack (played as an adult by Sean Penn) finds himself a lost soul in the modern world, seeking answers to the origins and meaning of life while questioning the existence of faith. Through Malick's signature imagery, we see how both brute nature and spiritual grace shape not only our lives as individuals and families, but all life.

If cinema was a religion then Terrence Malick must be considered one of its most expressive, lyrical prophets. His latest work and some would argue, his magnum opus, "The Tree of Life" is a film of tremendous power and ambition. His vision coheres around the O'Brien (led by a stupendous Brad Pitt) clan in idyll 1950s' Texas suburbia but surrounds itself with the bigger picture, trying to coax answers out of the unfathomable and illuminating the dark corners of our existence long since forgotten. There's a sense that Malick sees the majesty in the littlest speck and in his most perceptive moments, reveals the inconsequence -- harsh, as it might seem to some -- of our individual states of being but finds a miraculous antithesis in humanity's ability to transcend into our shared consciousness of memories, love and faith. Time proceeds in a Moebius strip and the universe is in direct correlation with the O'Briens in Waco -- their experiences here seemingly independent from Malick's most audacious attempt at figuring out a design as grand as the Creation of Life itself.

In the truest essence of Malick and not since the masterwork that is "Days of Heaven", has he created a film that's as lovingly meditative, deeply spiritual and entrancingly dreamlike such as this. The conception of Earth is no less an event than the birth of a newborn, as the sacred events leading up to the evolution of humanity is juxtaposed with the eldest O'Brien child's -- Jack (played by Hunter McCracken) -- own maturation into a man, later played by Senn Penn who fits in the narrative jigsaw through wistful sequences of gentle reminiscence. He regards his father, Mr O'Brien, the enigmatic head of the family of three boys and a beautiful and ethereal mother (Jessica Chastain) as a character with unknowable depth -- at once loving and cruel.

Pitt plays the father character with a degree of complexity that the trajectory of his career has always hinted at but never quite touched on -- until now. Complicated, disciplined and prone to fits of anger and recognitions of affection, Mr O'Brien cuts a familiar figure with many sons. By contrast, the mother is forgiving and kind, protecting her children from the stern hand of the father, leading to question of the evolution of mankind through a simple question of rearing - which of parent shapes a child the most? The love of the father holds one hostage and recalls an Oedipal reverie when a son's inability to understand a paternal ambiguity turns into an intense animosity.

Paralleling these qualities with the pursuit of comprehending the concept of an inscrutable God being as capricious and arbitrary as the undefinable notions of life and death, Malick understands the figure of the Father is one that holds power -- especially in the eyes of children -- and fallibility. His tapestry that involves the boundless continuum of perpetual consciousness expresses a deep sorrow about the irony of mirroring familial experiences that are common and mundane. Malick's most urging conceit seems to tell us that who we are, what we do and where we go do not actually matter in the greater scheme of things.

Malick spins a narrative as discursive and all-consuming as the nature of the time itself as he explores the nuances of living to reflect, not only on the self and life, but also an intrinsic history and interconnectedness with the universe beyond our purview. However, as prefigured in Malick's distinctively evocative narration, the film's inherent story becomes estranged from the purpose of understanding -- the film becomes one that floats in the ether, becoming more than just codified expressions of beauty (filmed by a godly Emmanuel Lubezki) but a sublime study of disarticulated frailty and something that becomes a genuine cinematic experience that transcends the screen and onto our souls.

(Philosophical and deeply stirring, Malick's latest film reassures us of the glory of the medium)

THE CURIOUS CASE OF BENJAMIN BUTTON (2008) 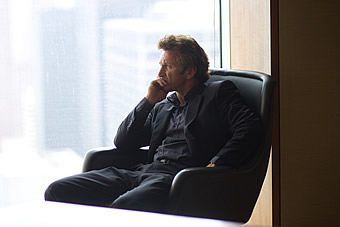 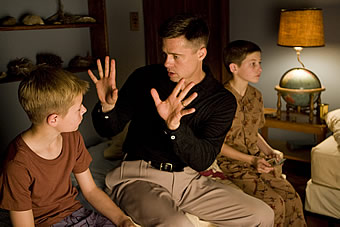 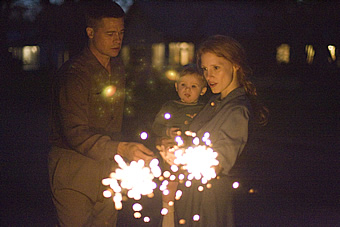 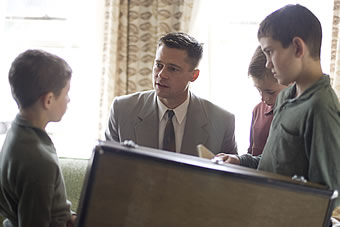