Synopsis: In this interplanetary adventure, shortly after arriving to help colonize Mars, an astronaut dies while giving birth to the first human born on the red planet—never revealing who the father is. Thus begins the extraordinary life of Gardner Elliot—an inquisitive, highly intelligent boy who reaches the age of 16 having only met 14 people in his very unconventional upbringing. While searching for clues about his father and the home planet he’s never known, Gardner begins an online friendship with a street—smart girl named Tulsa. When he gets a chance to go to Earth, Gardner is eager to experience all of the wonders he could only read about on Mars. After his explorations begin, scientists discover that Gardner’s organs can’t withstand Earth’s atmosphere. Gardner joins Tulsa on a race against time to unravel the mysteries of how he came to be and where he belongs in the universe.

A teenage boy born and raised on Mars breaks out from his NASA enclosure on his maiden trip to Earth, hooks up with the girl he’s been video-chatting, and the two embark on a road trip across the United States to find his long-lost father while falling in love with each other in the process. That’s the story Allan Loeb wants to tell, which is meant to be as much a coming-of-age journey for its male protagonist Gardner (Asa Butterfield) as it is a romance between Gardner and plucky Colorado high-schooler Tulsa (Britt Robertson). To do both equally, Loeb and his director Peter Chelsom find themselves needing to explain how Gardner came about under such unplanned and unexpected circumstances, what those circumstances mean for him physiologically and psychologically, and last but not least how Gardner and Tulsa would navigate the peculiarities of their unusual coupling. It’s a lot of space (or ground) to cover, and true enough, ‘The Space Between Us’ is as wobbly and uneven as the first steps that Gardner takes in our gravity-dense environment.

That much is evident right from the get-go, which spends a good half-hour documenting the mission conceived by visionary scientist Nathaniel Shepherd (Gary Oldman) to create the first Martian colony that will come to be named ‘East Texas’, the discovery two months after going into space that lead astronaut Sarah Elliott (Janet Montgomery) is pregnant, the unfortunate timing of Sarah’s delivery just as their spacecraft reaches Mars, her demise after giving birth to Gardner, and why Nathaniel and his co-founder Tom (BD Wong) decide to keep Gardner’s birth a secret. Despite skipping ahead sixteen years right after, it will take yet another half-hour to establish Gardner’s discontent with his isolation, the preparations leading up to his maiden trip to Earth, his pent-up frustration at being cooped inside NASA, and finally his escape while under medical evaluation to find Tulsa and the biological father that he never knew. It may try to make significant lengths of time passing quickly, but trust us that the first hour is fatally rushed yet sluggishly paced.

Thankfully, those patient enough to sit through the labored setup will at least be rewarded with a more compelling second half. Across the American Southwest, Gardner and Tulsa will try to find the beach house in the photo that Gardner has of his mother and another male whom Gardner believes is his father, while dodging Nathaniel and Kendra who have the resources of the local authorities at their disposal. Tulsa isn’t your cookie-cutter teenage heroine; rather, the orphan who’s been through a number of foster homes is very much her own girl, hot-wiring a crop duster to lift Gardner out of trouble, calling his ‘bullshit’ out when she does not believe him and tracing the dots one by one to locate Gardner’s father. No thanks to the pressure difference between Earth and Mars, Gardner finds himself in mortal danger because of an enlarged heart – and it is Tulsa who will drive him the last mile, proving to be not just company but an indispensable ally in Gardner’s quest.

Even as Loeb turns on the sentimentality with such lines as ‘your heart’s too big’ or ‘his heart can’t handle our gravity’ and Chelsom reciprocates with scenes of Gardner and Tulsa kissing and cuddling in the Grand Canyon at night with only their headlights as illumination, the leads Butterfield and Robertson keep their budding romance real and endearing with a nice complementarity that juxtaposes Gardner’s sweet naivety with Tulsa’s icy straight-talking exterior. There is an obvious age difference between the 19-year-old Butterfield and the 26-year-old Robertson, but that disparity actually works in their characters’ favour here, emphasizing the difference between one who has pretty much grown up in a ‘bubble’ environment and another who has seen her fair share of rough and tumble in life. It is their romance that earns the series of last-minute twists/ revelations surprising poignancy, even though it is not quite so hard to guess just who Gardner’s father really is and/or ignore the obvious deus ex machina for the obligatory sappy conclusion.

As flawed as it may be, it is hard to completely hate this sci-fi teenage romance mashup, not least because of its appealing leads. Had it glossed over its E.T. premise and spent more time developing the central relationship between Gardner and Tulsa, ‘The Space Between Us’ would probably have been much more enjoyable. Pity then that both Chelsom and Loeb spend almost half the time trying to figure out what sort of movie they want this to be, and not simply have settled for being the romance fantasy which it really is earlier – and whether of Chelsom’s doing or not, the overbearingly maudlin musical score does it no favours, even working against it by diluting the dramatic impact of some crucial turning points in the story. Still, there is a touching soulfulness at the end of this interplanetary star-crossed romance, so even if it isn’t altogether otherworldly, there is at least some gratification for those who have not put space and/ or distance between them and this movie.

(Not quite knowing if it should be intriguing sci-fi or sappy teenage melodrama, this mashup flounders close to half its time before finally finding its sure – and even effective footing – as the latter) 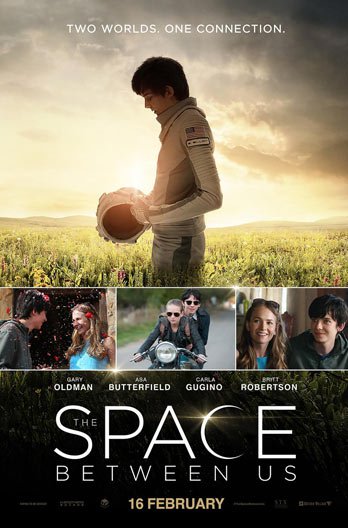