Synopsis: In her much-anticipated foray into the horror-thriller genre, Taylor Schilling stars in THE PRODIGY as Sarah, a mother whose young son Miles' disturbing behavior signals that an evil, possibly supernatural force has overtaken him. Fearing for her family's safety, Sarah must grapple with her maternal instinct to love and protect Miles in favor of investigating what - or who - is causing his dark turn. She is forced to look for answers in the past, taking the audience on a wild ride; one where the line between perception and reality remains blurry.

As far as evil-child horror thrillers are concerned, ‘The Prodigy’ may not break new ground, but it is surely unsettling enough to unnerve you.

The kid in question is Miles (Jackson Robert Scott), a precocious child born to the happy and attractive married couple Sarah (Taylor Schilling) and John Blume (Peter Mooney). It so happens that Miles is born just moments after a serial killer is gunned down by police, and the latter’s soul decides to take residence in the former’s body.

Like the title implies, Miles is regarded in his early years as somewhat of a genius, having displayed extraordinary cognitive ability in speech, reasoning and science. But there are also signs that something may not be quite right about him, such as how he doesn’t cry during his injections as a baby, or how he grabs a spider and crushes it in his hands, or how he speaks Hungarian in his sleep.

Things really start to go sideways after Miles turns eight. For one, he ambushes the babysitter with a shard of glass on the basement stairs. For another, he hits his fellow classmate who happens to be paired with the girl he wants to partner with on a science project in school. And for another, his Hungarian sleep-talk consists of doing some vile and vulgar words to a woman.

At first, Sarah refuses to believe the soft-spoken doctor Arthur Jacobsen (Colm Feore) when he suggests that another more disturbed consciousness has invaded Miles’ body. When she finds the family dog mutilated and hidden in the basement cupboard, Sarah is finally convinced that the said doctor’s theory about reincarnation might not be so far-fetched after all.

What follows is a race against time to save Miles’ soul before it is completely vanquished by that of the invading spirit, led by none other than his mother Sarah. Oh yes, it isn’t difficult to guess that the ensuing narrative hinges on the bond between mother and son; more specifically, we are kept in suspense just how far will Sarah go in order to save Miles, especially if that could very entail aiding the late serial killer to complete his unfinished business so his soul would depart Miles’ body in peace.

To writer Jeff Buhler’s credit, he does push the plotting to surprising extremes, culminating in an unexpected denouement for both Sarah and Miles that treads into morally ambiguous territory. On his part, director Nicholas McCarthy duly follows his writer’s lead in placing the mother-son relationship at the forefront, hinging on an effectively terrified performance by Schilling to keep us emotionally invested in the twists and turns.

It bears noting too that McCarthy does not resort to jump scares at any point during the film, preferring instead to rely on a genuinely creepy atmosphere to get under your skin. Much of that comes from the mystery (which Miles himself reveals towards the end) of just who is talking through Miles’ body at any point in time, given how Arthur’s hypnosis session brings to light the extent to which the spirit in Miles’ body is a manipulative and cunning liar.

That we are fascinated with Miles is testament to Scott’s amazing ability to switch from sweet and innocent to mean and scary seamlessly, and McCarthy taps into his young star’s utterly convincing portrayal to inject a palpable sense of dread and unease into his film. Aside from Schilling and Scott though, the rest of the cast are largely underused in their supporting roles, but both lead stars thankfully play off each other extremely well and otherwise make up for the parts of the script that are under-developed.

Even if therefore the film doesn’t break new ground in a subgenre dominated by classics like ‘The Bad Seed’, ‘The Omen’ and ‘Children of the Corn’, ‘The Prodigy’ is a reasonably gripping thriller that packs sufficient chills to satisfy those looking for a horror fix. Don’t go in looking for any big scares though, for there are no such sequences here; instead, this is the sort of movie which opts for foreboding, and succeeds at creeping you out.

(It doesn't break new ground, but this evil-child horror thriller that packs some powerful mother-son emotion will quite surely unnerve you) 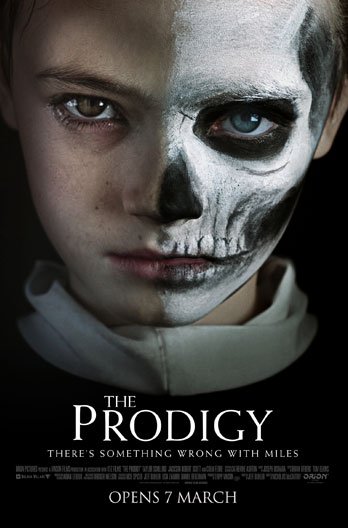