Synopsis:  The grandmaster Fei Lung lost everything after he got defeated by Chun. To regain his reputation, Fei Lung challenges her to a final fight. Much to his surprise, he gradually falls in love with Chun. Will he be able to win both Chun’s heart and the battle at the end?

After the success of his spy spoof, Agent Mr. Chan (2018), stand-up comedian and actor Dayo Wong or Wong Tze Wah is back to tickle the funny bones in his latest self-directed, co-penned martial-arts parody, The Grand Grandmaster.

To fully appreciate a movie liked The Grand Grandmaster, you need to know that Wong is not the flashy, brash comedian for instance Stephen Chow. The latter indeed set a high bar and sadly Wong barely touches it. Frankly, Wong’s comedic style works better on stage or even on television. Put him on the big screen and his weaknesses as a comedian shows.

Wong plays Ma Fei Lung, a martial-arts practitioner who specialised in Ma Ka Thunder Style, a form of martial arts started 800 years ago by his ancestor, a certain General Ma when he escaped to Hong Kong island from a losing war. In present times, Ma and his relatives have benefitted from this so-called martial arts. He has three branches of martial-arts school, has an upcoming outlet in New York and has a wide range of merchandises including soup mix, kitchenware and ahem their own line of Chinese herb infused sanitary pads to go with it.

Until one fine day, Ma is defeated by a former boxing champion, Chen Tsang (Taiwanese actress Annie Liu from Invincible Dragon) in broad daylight. Ma is soon cornered into a one on one fight with Tsang by the media. After ways of trying to coerce Tsang into a fix match failed, Ma is surprisingly coaxed into the fight of all people, Tsang’s estranged father (played by Benz Hui) who agrees to coach him to fight against his own daughter.

The Grand Grandmaster would have been a much funnier movie if Wong has make a fast and furious parody on the martial-arts genre make popular in recent times by Ip Man and Wong Kar Wai’s The Grandmaster. Wong is probably inspired by those online videos which showcased veteran martial-arts masters in China being beaten to a pulp by real-life MMA fighters. His jab or tribute to the late Bruce Lee’s Be Water analogy is also rather wacky and ticklish. But alas, the comedy pretty much loses its steam before the first hour as Wong decides to turn it into a melodrama and unbelievable romance romp between his character and Tsang.

It turned out Ma is a loser figure right from the start. He is dumped by his ex-wife, had a son that is not his and inherited a martial-arts that falls short. Tsang on the other hand is cheated and jilted by a boyfriend who encouraged her to fight in a fixed boxing match which result in her leaving the sports. Instead of churning out a sharper, witty take on the material, screentime is wasted on these two squabbling individuals who become lovers in minutes. Preposterous is a virtue it seems.

Despite Wong’s best efforts to keep this a pure HK production without the involvement of China companies (apparently he funded the movie himself), The Grand Grandmaster is largely a missed opportunity. Comparisons with another Lunar New Year offering, Donnie Yen’s Enter The Fat Dragon is undeniable. In fact both shared a number of similar themes but Dragon is ultimately a winner in both action and comedy. The Grand Grandmaster is only entertaining in bits but watch out for a very gung-ho Annie Liu who almost steal the limelight from Wong. 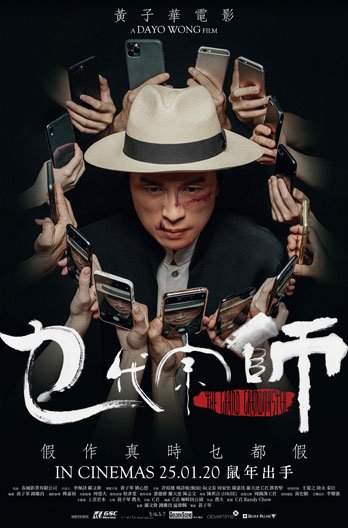