Veering away from Noomi Rapace’s emotionally nuanced yet intense portrayal and Rooney Mara’s cool yet dark portrayal of Swedish hacker Lisbeth Salander, Claire Foy’s Lisbeth Salander comes across very much as a Batman (or should I say Batgirl) wannabe who, rather than face foes much like the villains from Gotham’s rogue gallery, faces enemies straight out of a Bond movie. And wrapping it all up is a Bond ‘girl’ in the form of Mikael Blomkvist (Sverrir Gudnason) who has a largely passive role of helping Lisbeth find out who she is up against but who also plays the role of damsel in distress who needs to be saved by Batgirl Lisbeth.

The Batman/Bond influence is felt right at the beginning of the movie with the opening scene being a blast from the past in a house atop a snowy cliff of sorts. Trapped at the edge of a cliff of sorts, the young Lisbeth is forced to make a dramatic escape from her abusive father by falling backwards off the height as her twin sister, Camilla, watches her without blinking at all (for unknown reasons Camilla chooses to stay with her abusive father despite appearing to have a bond of sorts with Lisbeth). The movie then opens with a sequence typical of a Bond movie (you half-expect Daniel Craig to show up in a tuxedo).

The next scene then switches from Bond mode to Batman mode as we see Lisbeth mysteriously appearing in the home of a prominent businessman (who is a cookie-cutter evil man who abuses women, beating both his wife and random prostitutes he hires while sleeping with his business partner’s wife) after an extremely short blackout. You half-expect her to reply to the businessman’s question of who she is with “I am vengeance, I am the night, I am Batman!” before she beats the man up and leaves him literally hanging (without killing him).

And that is precisely what makes this film disappointing. Rather than take on its own tone, it tries too hard to live up to some kind of ideal of an action film franchise, resulting in it being a strange wannabe that is neither Bond nor Batman nor quite its own thing. Everything is made big, the explosions are huge and the shots are overly iconic. This results in everything feeling somewhat hollow and strangely slow-paced as you never quite get drawn into Lisbeth. Unlike Rapace who debuted the role with a vulnerability that was cloaked by a smouldering intensity which make you drawn to her Lisbeth while feeling sympathetic, Foy’s Lisbeth feels like she is trying too hard to be edgy yet vulnerable. There are moments (usually during close up shots) when that veneer of Foy’s Lisbeth cracks a bit and you start to sense a little of her vulnerability, but those moments are never built upon, leaving audiences unable to experience and appreciate Lisbeth’s complexity. Rather, she is simply a brooding bisexual genius hacker who clearly has unexplained emotional entanglement with her non-identical sister and investigative journalist Mikhail Blomkvist (reduced to a wallflower role).

Unfortunately, even if it strives to be a conventional action thriller, the movie could be more tightly paced. Supposedly nerve-wrecking moments, such as when Lisbeth threatens to prevent a potential ally from escaping the clutches of their common enemy, did not make my heart skip a beat. In fact, I kept wondering when such moments would speed up instead.

The action sequences occasionally make the movie a little bit more thrilling, but for the most part, the movie tries too hard to be edgy yet appealing to the broad audience. The end result is a movie that is for, most part, neither quite exciting nor different.

(Entertaining to some extent if you are new to the series, but disappointing for those who watched the previous movies from the Millennium series) 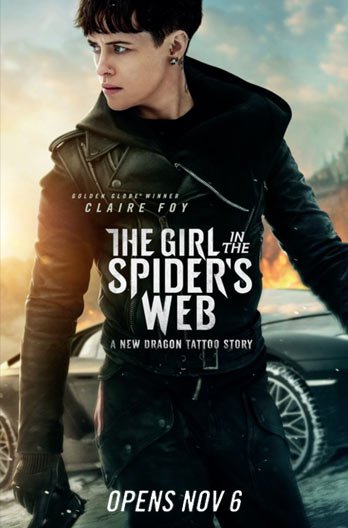