Synopsis: In the year 1945, the Chinese army led by General Lei Yi Fang (Huang Xiaoming) defeats the Japanese troops. Tong Da Qing (Dawei Tong), a signaller from the army, successfully captures Yan Ze Kun (Takeshi Kaneshiro), a Taiwanese doctor working for the Japanese army. After the Japanese surrender, the three embark on different paths. Lei returns to Shanghai and marries Zhou Yun Fen (Hye-Kyo Song) who comes from a rich family. Yan returns to Taiwan only to find out that his lover, Noriko (Masami Nagasawa), has been repatriated to Japan. As for Tong, he falls in love with a nurse, Yu Zhen (Zhang Ziyi). Life seems peaceful for awhile until the Chinese civil war breaks out and changes the lives of many. In fear of political changes, many rush to board the Taiping, a Chinese steamer that is heading for Taiwan. A last ray of hope for the people, the ship departs...unfortunately, it meets with an accident and capsizes. Is all hope gone or will there be a chance of survival?

Four years after making waves in Chinese cinema with the ambitious and yet immensely satisfying ‘Red Cliff’, John Woo has taken that metaphor literally in yet another expensive historical epic diptych. Widely dubbed as China’s answer to Hollywood’s ‘Titanic’, it is built around the sinking of the steamer Taiping after its collision with another vessel while en route from Shanghai to Taiwan’s Keelung Harbour on January 27, 1949, leading to the deaths of about 1,000 refugees fleeing the rule of the Communists at the height of the Chinese Civil War. But to set expectations right, you won’t even get to see the start of that doomed voyage by the end of this movie, which really is meant to establish three different sets of characters whose fates converge on board the Taiping.

Given the historical context, Woo has chosen to ground this opening half against the backdrop of the conflict between the Nationalists and the Communists that gripped China at the turn of the half-century. Indeed, each of these characters find their stories set in motion by the revolution – on one hand, the stoic and honourable General Lei Yi Fang (Huang Xiaoming) of the National Revolutionary Army fighting a losing battle at the frontlines, his beautiful socialite wife Zhou Yun Fen (Song Hye-Kyo) waiting for his safe return in Taiwan, and his comrade-in-arms Tong Da Qing (Tong Dawei); and on the other, the nurse Yu Zhen (Zhang Ziyi) searching for her long-lost lover by volunteering at a makeshift hospital in Shanghai for the wounded as well as the Taiwanese doctor Yan Ze Kun (Takeshi Kaneshiro) also looking for his long-lost Japanese lover Noriko (Masami Nagasawa).

Over the course of two hours, Woo’s screenwriter Wang Hui-Ling (of ‘Crouching Tiger Hidden Dragon’ and ‘Lust, Caution’ fame) plots the intersecting paths of these characters with varying results. Of the three characters pining to be reunited with their loves – Yi Fang, Yu Zhen and Ze Kun – the last gets the shortest shrift, despite having potentially the most interesting arc. Ze Kun’s mother’s objections to his relationship with Noriko is only given cursory mention, and doesn’t go much further beyond the fact that Noriko is of the same race as the Japanese imperialists who had before occupied the island. Yu Zhen’s determination to be reunited with her lover at the frontlines of battle at least resonates in parts because of the extent that she is willing to go to search for him, even sacrificing her ‘body’ so she can save enough money to buy a ticket to Taiwan where he may be.

But the bulk of the screen time is dedicated to Yi Fang, or more precisely, his frustration at being made to wait out for weeks with hundreds of starving troops in the cold snowy mountains while his superiors consolidate their positions in much better environments. Much to our relief, Yi Fang spends most of the second half of the movie apart from his wife Yun Fen, the latter of which settles in a quiet house in the lush Taiwanese countryside trying to write a tune that ultimately forms the backbone of Tarô Iwashiro’s score. Ironic as it may be, their time spent apart from each other is more moving than that spent together, which consists of four utterly cringe-worthy scenes of Yi Fang meeting the vivacious Yun Fen at a dinner party, falling wildly in love with her (and her with him) while dancing the waltz barefoot, and promptly marrying him after a brief (reckless) drive in a jeep in the woods.

Notwithstanding that Woo has consciously made this film in the vein of ‘Casablanca’ or ‘Gone with the Wind’, it is precisely the romance at the heart of each of the three overlapping stories that is its weakest link. If you need good reason why Woo should stick with machismo, then look no further than the clumsy exchanges or the ham-fisted melodrama between the couples that is supposed to demonstrate just how much they can’t bear to be apart from each other. Woo doesn’t so much romanticise the proceedings than drench them in syrup, and let’s just say if you had goosebumps from what passed between Leonardo DiCaprio’s Jack and Kate Winslet’s Rose, then you’ll be literally breaking out in cold sweat here. The only relationship that doesn’t come off hokey is strictly speaking only half a romance, and that is of Da Qing’s yearning for Yu Zhen, with whom he paid off to pass off as his wife in a photo so he can get more rations.

Those hoping for the sort of grand battle sequences in ‘Red Cliff’ will probably be sorely disappointed as well. As much as Woo doesn’t shy away from portraying the carnage of war, be it spurts of blood when bullets go through flesh or bodies being blown apart, there is none of the thrill that comes simply from a properly choreographed sequence. There’s no doubt war is a messy affair, but there is too little semblance of continuity between the gratuitous shots of scores of soldiers charging at each other or vehicles getting eviscerated from underneath. The fact that too many of them happen in slo-mo is even more ingratiating, exacerbated by the blatant framing of some shots meant as feeble justification for the higher 3D price in selected theatres.

No doubt for commercial reasons, Huang spends more time onscreen than any other character, but the actor is either too stoic in his scenes with Song or too expressionless as that of a commander forced to watch his men starve, freeze and eventually die. Zhang fares much better as the devoted lover willing to sacrifice all to be reunited with the man she loves; hers is unequivocally a more nuanced performance balancing determination and vulnerability. Kaneshiro is sorely wasted in a role that is acutely underdeveloped, and even the lesser-billed Tong is given a more substantive character to work with. The other actors barely register, except for Korean actress Song’s impressive ability to deliver her lines in Mandarin.

It’s no secret that ‘The Crossing’ is Woo’s passion project, which the veteran Hong Kong director has chosen to make in two parts presumably so that his audience can develop a certain attachment with his characters before they meet their tragic end on board the Taiping. Unfortunately, Woo has chosen to make this first part by way of a wartime romance, and while Woo has shown he can be good with the former, he proves here for the first time that he is quite inept with the latter. That clumsiness has unfortunately crossed over to his portrayal of the former, which frankly lacks persuasion or poignancy. Seeing as how different the concluding chapter will likely be from the first, we hope Woo will pick up the pieces and forge a more compelling voyage come six months later.

(Shockingly inept whether as a war movie or as a wartime romance, ‘The Crossing’ sees John Woo stumble out of the gate with one of the least additions to his pantheon by far) 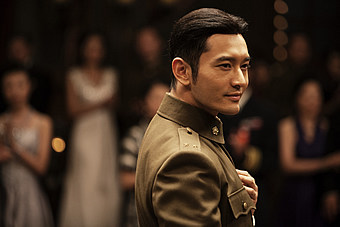 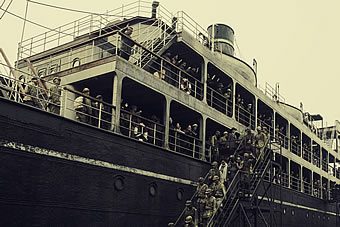