Synopsis: Based on the real-life courtship: Pakistan-born comedian Kumail and grad student Emily fall in love, but they struggle as their cultures clash. When Emily contracts a mysterious illness, Kumail must navigate the crisis with her parents and the emotional tug-of-war between his family and his heart.

It sure feels like there hasn’t been a better time for actors of South Asian descent than now when it comes to minority visibility in Tinseltown – think television’s Aziz Ansari (Master of None; Parks and Recreation) and Mindy Kaling (The Mindy Project), or even Priyanka Chopra’s (admittedly meh) Hollywood big-screen debut in this year’s Baywatch. So, it seems as good a time as any for Pakistani-American Kumail Nanjiani to make his unlikely – by Hollywood standards at least - romantic-comedy male lead debut in The Big Sick. Throw in Judd Apatow’s producer credentials to the mix – Apatow has a knack for hewing atypical genre successes out of awkward dude-desirable lady couplings – and you have a film which suggests at least a couple of sellable propositions.

To ramble on any further about the other forces at work in this film however feels like a disservice to the two personalities at its core. The Big Sick delivers, and delivers well at that, and much of the credit naturally goes to Pakistani-American Nanjiani and his wife Emily V. Gordon: real-life comedy writer-performers, co-screenwriters responsible for much of the film’s funny, heart-warming material and of course, chief pilots who’ve chartered the course of their own incredible real-life romance upon which the movie is based.

Truth be told, even pigeon-holing the film as rom-com feels like potential prejudice and detraction from the depth it achieves in exploring various types of relationships: romantic ones between uncertain lovers, familial ones between first and second-generation immigrants, trust-building ones between a man and his girlfriend’s parents, whom he encounters for the first time. It does all of this while juggling a number of other topics with admirable ease and nuance: the American stand-up comedy scene, cultural and immigrant-identity tensions, as well as a life-changing health crisis. The fact that much of the film is based on true events lends sufficient heft and an air of authenticity, which it wryly sprinkles with a fine dust of sentimentality to satisfy the die-hard romantics.

Tired cabbie and terrorist-related stereotypes get a flavour du jour update in the form of Uber-driving Nanjiani (playing himself in the film), whose true passion involves honing his stand-up comedian skills at a bar in Chicago while incorporating his Pakistani-Muslim roots into his acts and deliberating ISIS-related jokes. At one of the shows, he meets Emily (played by Zoe Zazan), a post-grad student on track to becoming a therapist. Her friendly heckling of Nanjiani during the show turns out to be the serendipitous spark that sets off the chain of events between them. Something that ought to have been a one-night stand between two commitment-phobes soon develops into a proper relationship.

What is a romantic comedy without some initial strife (we already know it’s a happy ending because, you know, refer to real life), and this comes in the form of Nanjiani’s traditional parents (played by Anupam Kher and Zenobia Shroff), who spare no effort in arranging a succession of eligible Pakistani-Muslim wives for him. While he’s not interested in them, he keeps Emily in the dark about this (and her from his family), and basically crap hits the fan when she uncovers the fact. If the film’s already been sailing comfortably away from the usual rom-com territory so far, it suddenly and boldly nosedives when the titular ‘big sick’ happens.

Emily is struck with a mysterious lung infection before the acrimony between our heroes can be resolved, and has to be put into a medically-induced coma while doctors race against time to save her. Nanjiani realises he still loves her and though the mood starkly changes from here, this turning point is also arguably where the film starts to engage its audiences most tenderly. Emily’s parents, Beth (Holly Hunter) and Terry (Ray Romano) enter the fray, fully aware of the hurt Nanjiani’s inflicted on their daughter and definitely displeased. While she sleeps blissfully unaware of all the clamouring going on around her, the script takes its time to flesh out these side characters as they gradually bond with Nanjiani over hospital visits, home sleepovers and attending one of his stand-up comedy shows.

The Big Sick’s investment in developing the roles of not only its romantic leads but their family members pays off, because it affords nearly all of the actors, main or supporting, solid material to sparkle in their performances. In particular, veterans Hunter and Romano almost steal the limelight, exuding feistiness and vulnerability in solid doses, as the fissures in their own relationship are exposed and healed. Kher and Shroff also sizzle as the other set of parents, portraying their internal tug-of-wars between obligation to tradition and love for their son with much comic aplomb.

Needless to say, the film wouldn’t have worked without the accomplished renderings of its protagonists. Nanjiani may already have lived through much of the story’s events in real life, but he succeeds in substituting affectation with a heightened sensitivity in his autobiographical portrayal. In the film, he tackles his fledgling comedian career and his issues with Emily, Emily’s parents and his own parents with enough wide-eyed optimism for audiences to root for him, despite his obvious imperfections. Nanjiani’s chemistry alongside the disarmingly dorky charm of Zazan’s Emily is also convincingly palpable and it’s difficult not to get misty-eyed when Emily recovers from her near-death experience. “In sickness and in health”’ suddenly takes on a shape we can visualise, and we’re not even talking about wedding bells here yet.

If it all sounds like The Big Sick is a serious film, it isn’t. At its heart, it’s still comedy and it’s as funny as it’s warm. To the film’s huge credit, it does not fall into the trap of milking cheap laughs or gaffes from intercultural conflict (in fact the film never shows Emily meeting Nanjiani’s parents), choosing instead to address how he and his family negotiate their internal affairs in humorous fashion and how he wins them over because they are quite simply – family. The co-screenwriters’ sense of comic timing also comes through in the witty on-screen repartee between Ninjiani and Emily, as well as with the other characters around him. Catch this flick if you’re into intelligent comedy, but also because it breathes new life into a number of universal truths run threadbare by other genre contemporaries – that it doesn’t quite matter the forms taken by life’s curveballs; love wins when it’s meant to and if everyone works hard enough at it.

(Charming, touching, tender and still managing to be funny, this perceptive romantic-comedy loosely based on a real-life story succeeds in hitting all the right spots) 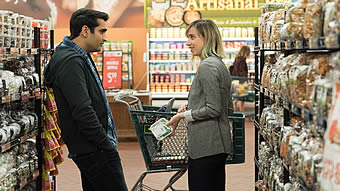 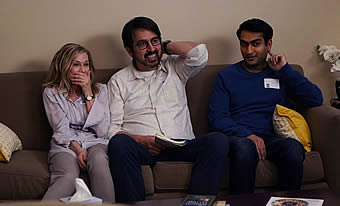 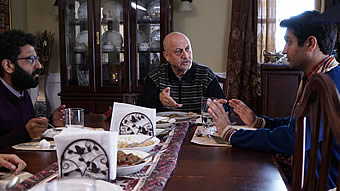