Synopsis: It's great to be Spider-Man (Andrew Garfield). For Peter Parker, there's no feeling quite like swinging between skyscrapers, embracing being the hero, and spending time with Gwen (Emma Stone). But being Spider-Man comes at a price: only Spider-Man can protect his fellow New Yorkers from the formidable villains that threaten the city. With the emergence of Electro (Jamie Foxx), Peter must confront a foe far more powerful than he. And as his old friend, Harry Osborn (Dane DeHaan), returns, Peter comes to realize that all of his enemies have one thing in common: OsCorp.

If you thought that it was too soon to reboot the Spiderman franchise and the results of Marc Webb’s entertaining but none too outstanding ‘The Amazing Spider-man’ did not convince you otherwise, this sequel will similarly leave you unimpressed. And yet despite the inevitable comparison with Sam Raimi’s marvellous ‘Spider-man 2’, Webb’s ‘The Amazing Spider-Man 2’ is an excellent follow-up to its 2012 predecessor in almost every regard, combining a heartfelt teen romance with thrilling superhero action for a truly vertiginous spin in and around familiar landmarks of New York City.

Last we left Peter Parker and Gwen Stacy, our favourite couple’s relationship was strained by Peter’s promise to her late father (Denis Leary) to leave her alone for safety’s sake – and despite the obvious giddy chemistry between them, Peter finds himself haunted by visions of her father. Yet there is no shortage of tender intimate moments in their on/off relationship, and let’s just say while some of their exchanges will leave you grinning and others will leave you tearing, there is just no denying that their romance is very much the emotional backbone of the whole movie, culminating in a shocking twist at the end which we suspect will leave few viewers dry-eyed.

The other part of the movie’s emotional core lies with the mysterious disappearance of Peter’s parents (Campbell Scott and Embeth Davidtz seen in expanded flashback roles), tied to the shady corporation Oscorp run by Norman Osborn (Chris Cooper) which was also responsible for Curt Connors’ mutating Lizard seen in the last film. While his Aunt May (Sally Field) has tried to keep the truth from him, Peter can’t quite find closure without knowing why - and the return of his childhood pal Harry Osborn (Dane DeHaan) to take over the Oscorp business reignites his curiosity how his parents’ fates were related to some top-secret experiment that his father Robert was working on with Norman before the former’s death.

Oh and did we mention that Gwen also happens to be an employee of Oscorp while awaiting her entry into Oxford? That reeks smack of narrative convenience, but it does engender one of the most delightful meet-cute moments between Peter and Gwen that takes place in a broom cabinet in the Oscorp building no less. The necessity of weaving together the multiple storylines has Gwen digging into a former Oscorp engineer named Max Dillon (Jamie Foxx), who is transformed after a lab accident involving a loose fuse and a tank of eels into the electrically charged villain Electro.

Of the numerous characters which inhabit the movie, Electro probably stands as the most redundant. There is something fascinating about the lowly and unappreciated Max at first, an individual so resigned to his own insignificance that he becomes obsessed with Spider-Man after a chance encounter on the street. Nonetheless, his psychosis – as well as his defining characteristic – fades into convention upon his transformation, while a surfeit of CGI take over to emphasise the extent of his destructive powers amidst an electrically-powered urban backdrop.

The more fascinating villain here turns out also to be the more familiar one, as Harry’s frustration with his inborn frailties lead him on a path of rising animus with Spider-man and by extension Peter. While Harry’s character arc is not much different from that in Raimi’s version, DeHaan’s chilling turn as the increasingly deranged Oscorp heir is far superior than what James Franco ever brought to the role. If you don’t yet know him from ‘Chronicle’ or the Beat-era drama ‘Kill Your Darlings’, this is as notable an introduction as any, an initially sympathetic figure whose tragic circumstance leads him to become cynical and sinister within the same breath.

Notwithstanding their respective motivations, Webb exploits both his villains for some hugely entertaining action showdowns. Electro’s descent upon Times Square midway through the film marks one of the definite highlights, an eye-popping spectacle of light, sound and visual artistry that combines some brilliant stunt work with Mark Friedberg’s inventive set design and Richard Johnson and Kim Jennings’ art direction for a stunning edge-of-your-seat adrenaline ride. No less impressive is Electro’s climactic battle set amidst New York’s key power grid, that makes thorough use of the numerous electric stacks for some mesmerising luminous shots from cinematographer Dan Mindel and a pulsing sub-dubstep score by Hans Zimmer and the bespoke collective known as The Magnificent Six for an electrifyingly gripping finish.

But Webb saves his most distinctive sequence for the last, with Spider-man confronted with the rise of the Green Goblin who knows his identity as Peter and therefore also his soft spot for Gwen. Symbolically set within a clock tower whose gears and ticking hands take on a whole new meaning by the time the dust settles, it reps one of the most tough-minded but simultaneously poignant endings in a superhero movie that we have seen, thrusting our titular character in an entirely new – and ultimately very exciting – direction. Webb’s forte as a director was always in his ability to forge affecting relationships between his characters, and the emotional payoff he delivers here is truly something to be reckoned with.

Certainly he has his actors to thank for that. Just as Tobey did in the second movie, British actor Andrew Garfield continues to grow ever more comfortable in the role of Peter Parker/ Spider-Man. He starts off goofy, cocky even, but ever more conscious of how he might be power-ful in saving the citizens of New York but power-less in protecting the ones close to him. There is little more we need to say about the spark that Garfield shares with his real-life girlfriend Emma Stone, except that they make an irresistibly winning couple. Foxx is better portraying his character’s tortured psyche as Electro than as Max, but Giamatti absolutely chews up the scenery in the few scenes he has playing the Rhino.

Arguably, neither prove as compelling as they should be, with DeHaan’s Green Goblin the only interesting villain that the movie has going for it. But what it lacks in malevolence, this crowd-pleasing sequel makes up for in teenage sass, unexpected poignancy and oh yes good old-fashioned Hollywood spectacle. It may not top Raimi’s benchmark, but it is mammoth summer popcorn entertainment of the highest calibre, finally living up to the addition of the adjective ‘amazing’ to this trilogy’s title.

(The romance is winning, the action thrilling, and the emotional beats moving – in other words, it’s a sequel you can safely say is amazing) 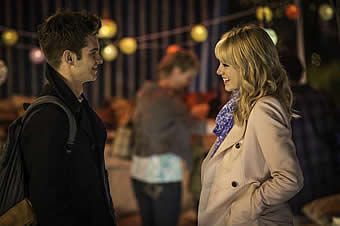 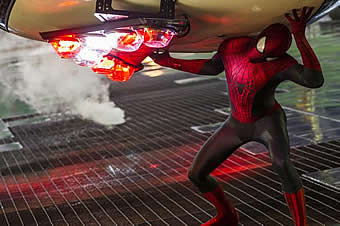 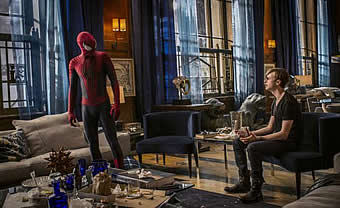 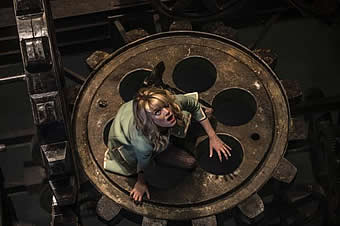