Synopsis: Anthony Mackie (AVENGERS: ENDGAME, CAPTAIN AMERICA) and Jamie Dornan (FIFTY SHADES OF GREY) star as New Orleans paramedics who encounter a series of horrific deaths linked to a designer drug. In a perfect storm of personal crises, their friendship and families are ripped apart by the mysterious pill’s bizarre effects.

Just liked the recent Project Power and Limitless, the premise of Synchronic revolves around a mysterious designer drug that has the possibility of either leaving you dead, burnt, stabbed or confused once consumed. It sounds promising and cool for an indie sci-fi thriller though the end result is frustratingly inadequate.

Ambulance paramedics Steve (Anthony Mackie) and Dennis (Jamie Dornan) are both buddies at work and off work. While on duty, the duo discovered a new drug is on the loose causing gruesome deaths and injuries to those involved. Soon, Steve incidentally discovers the pill dubbed Synchronic is sort of a “time-travel” drug from the creator himself.

But wait before any excitement kicks in, we get to know that ladies man Steve is actually dying from a brain tumour. His white man buddy on the other hand, is facing some marital issues with his wife and his rebellious teenage daughter, Brianna is supposedly missing after taking Synchronic at a party.

It’s not the science or drug that is crucial here but the dynamism of the characters and sometimes thought-provoking ideas. Mackie and Dornan are solid in their performances. Their exchanges are genuinely effortless given that more than half of the story is dedicated to their characters development.

Mackie gets the jackpot however as he is given the chance to shine in a challenging role that is comparable to the one in Altered Carbon. Steve Dannelly is a lonely man at heart, seemingly unable to commit fully to a relationship. He is also kind of envious of Dennis having a perfect family, loving wife and kids. When his sickness brings him to the brink of death, he realised he can make use of Synchronic to save the life of Brianna whom he believed is trapped in a time warp.

Instead of blessing the user with unlimited superpowers or intelligence, Synchronic brings one to a specific point in the past. It can be the civil war, ice age or a crocodile infested swamp in New Orleans. A different spot in the same house can transport you to a different timeline. And you can’t choose where you want to go and you need to back in the same spot in a specific amount of time or risk being trapped forever. In any other movies, this might be an opportunity for the filmmakers to deliver a frenetic action thriller. Indie filmmakers Justin Benson and Aaron Moorhead prefers to indulge the viewers in an intriguing experience rather than mere adrenalin rush.

The time travelling allow our African-American protagonist to learn and experience about culture, racism and hostility. This is definitely not on the level of back-to-the-future kind of goofiness. Rest assured Justin Benson and Aaron Moorhead are bent on delivering a far more unique, creative vision and perspective on time travel.

Like any other Hollywood movies be it indie or blockbusters, Synchronic is big on mind-bending ideas but the end product fails to deliver anything remarkable or sensational. The finale does delivered a righteous ending to the character Steve and perhaps a subtle message about abusing drugs. While the flick does have some interesting moments, it doesn’t quite live up to the hype of time-travelling on a pill.

(If you are in a mood for a taxing, moody sci-fi, try Synchronic today) 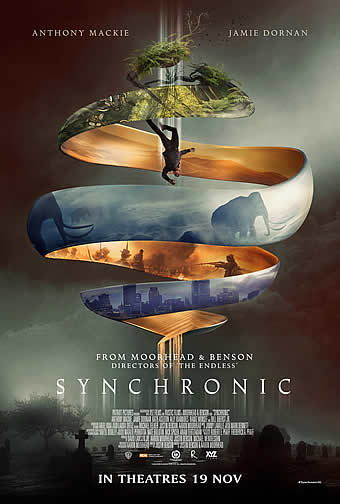