Synopsis: In the terrifying thriller SONGBIRD, the COVID-23 virus has mutated, and the world is in its fourth year of lockdown. Infected Americans are ripped from their homes and forced into quarantine camps known as Q-Zones, from which there is no escape, as a few brave souls fight back against the forces of oppression. Amid this dystopian landscape, a fearless courier, Nico (KJ Apa), who is immune to the deadly pathogen, finds hope and love with Sara (Sofia Carson), though her lockdown prohibits them from physical contact. When Sara is believed to have become infected, Nico races desperately across the barren streets of Los Angeles in search of the only thing that can save her from imprisonment ... or worse.

As most of the world went into lockdown, a handful of filmmakers decided that they would make the most of these unique circumstances; the result are pandemic-themed movies such as this and Doug Liman’s ‘Locked Down’ on HBO Max.

From producer Michael Bay, ‘Songbird’ imagines a post-COVID world four years later where the virus has mutated to make vaccination futile, and the infected as well as their close contacts are being herded into quarantined ghettos called Q Zones. The only ones privileged to be able to go about their regular lives are those who have natural immunity against COVID-23, identified by the special yellow bracelets around their wrists.

Out of this premise, director Adam Mason and his co-writer Simon Boyes have spun a romantic thriller about a bike courier Nico (KJ Apa) who races against time to save his uninfected girlfriend Sara (Sofia Carson) from being thrown into a Q-zone, after the latter’s grandmother (Elpidia Carrillo) falls ill and the Department of Sanitation folks turn up outside their door.

Nico’s plan is to plead with one of his wealthy regulars Piper (Demi Moore) to provide Sara with an immunity bracelet, after his boss Lester (Craig Robinson) lets slip the nature of the deliveries which Nico has been running for her. Unfortunately, afraid of being exposed for the black-market business she and her husband William (Bradley Whitford) are engaged in, Piper enlists a sadistic government official to get rid of Nico.

If it isn’t yet obvious, there are multiple overlapping stories unfolding at the same time. Besides the aforementioned characters, the mish-mash of other supporting faces includes the head of Nico’s courier company Lester (Craig Robinson), the sadistic person-in-charge of the Department of Sanitation Emmett (Peter Stormare), the online singer-songwriter May (Alexandra Daddario) whom William is having a toxic affair with, and May’s loyal wheelchair-bound fan Dozer (Paul Walter Hauser).

To Mason’s credit, these threads do eventually converge in a satisfying enough manner, especially as the minutes tick by before Sara is thrown into a Q-zone and unlikely to be able to re-establish contact with Nico. While the context is science-fiction, the movie itself unfolds as a mix of thriller and romance – the former with Nico being pursued relentlessly by Emmett and his soldiers; and the latter with Nico and Sara pledging their love for each other over their phones and through her residence’s front door – but the result is a dystopian melodrama not without its charms.

Opportunistic though it may be, there is no denying that the movie makes the best of shooting around a once-in-a-lifetime pandemic-era Los Angeles; indeed, if not for the ongoing real-life COVID-19 pandemic, there would not be any chance for Mason to capture such barren wide shots of the downtown area. It is an impressive stroke of genius, we’ll give Mason that, and it is sobering to witness what we would otherwise have dismissed as scenes from a post-apocalyptic movie being played out in real life.

As for the plotting and characters, let’s just say that there is sufficient going on within a relatively brief 85 minutes to keep you engaged. Having Bay on as producer ensures that the movie has enough polish, even though as most other Bay productions, it lacks scope, detail and imagination to be any sort of social commentary on the way the world had handled the pandemic, or even how the United States had mishandled it. As slickly disguised as it may be, ‘Songbird’ was a slapdash effort to exploit the impact of the COVID-19 restrictions on Los Angeles, and bears the signs of something thrown together so quickly.

Yet for its flaws, ‘Songbird’ isn’t an awful watch. You may criticise it for being insensitive, tone-deaf and exploitative of our current pandemic-stricken circumstances, but it is ultimately a harmlessly disposable venture that we would even dare say is borderline ingenious. At the very least, the notion of going all out to be with the ones you love, the ones you care about, and the ones you cherish will resonate with those who have lost or almost lost someone like that in their lives, and if anything, underscores that these are the people we ought to be fighting for.

(As exploitative as it may be, this romantic thriller set and filmed against our current pandemic-stricken circumstances is sufficiently engaging and unnerving) 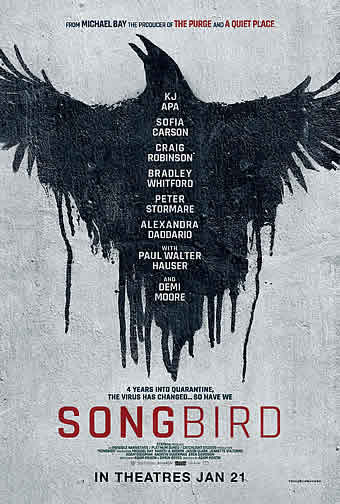