Synopsis: This is a story about three people, based on a true event – a murder and dismemberment that happened in Hong Kong. Jiamei Wang has moved to Hong Kong from Dongguan, China. Desperate to become financially independent from her mother and step-father, she ends up becoming a “compensated date”. Chi-chung Ting, a truck driver who had just been brutally dumped, finds Jiamei online. They communicate with each other via text message and become friends. They share their background stories, and talk about everything from love to hate, from life to death. On the day of the murder, Jiamei and Chi-chung finally meet in person. In the room, they play, indulge in ketamine and really enjoy themselves. During sex, Jiamei tells Chi-chung she wants to die. Chi-chung squeezes her neck until she passes away. Chong Sir (Aaron Kwok) is a quirky police officer who investigates the case…..

‘Port of Call’ belongs to that rare breed of Hong Kong film that strives to be social commentary. Indeed, that shouldn’t come as something surprising for those who have seen writer/ director Philip Yung’s previous two works, ‘Glamourous Youth’ and ‘May We Chat’, both of which similarly dealt with socially relevant themes of youth disaffection and other generational anxieties but are nowhere as compelling or accomplished as his latest. Here, Yung dramatically raises the stakes by basing his story on a gruesome, real-life murder case which shocked the nation back in 2008, so like its real-life inspiration, ‘Port’ revolves around the murder of a young girl that draws three distinct individuals together.

On the first hand is 16-year-old Wang Jiamei (Jessie Li), who moves to Hong Kong in 2009 to live with her mother, stepfather and older biological sister. Over the course of a fractured narrative divided into three chapters, we will come to learn of Jiamei’s ambitions to be a model that led to her auditioning for a dodgy talent company which uses her not as a photo-model but as talent scout, and how that eventually leads her to become a ‘paid escort’ so she doesn’t have to ask her mother for money for material stuff she wants to buy. In particular, her life of prostitution leads her to fall in love with a bookish but nonetheless handsome-looking twenty-something who promptly throws her under the bus when he is confronted by his girlfriend, leaving her emotionally devastated and emptier than ever before.

The next character we are asked to pay attention to is Ting Tsz-chung (stage actor Michael Ning in his bigscreen debut), a stocky short-fused meat deliveryman who also happens to be a triad member. Very early on, the tenement house where Ting lives is the site of a grisly murder where the victim was dismembered and subsequently disposed of in various locations all over town, and Ting turns himself in shortly after to confess his role in killing Jiamei after a drug-addled night of paid sex where Jiamei asks Ting to murder her. The whodunit isn’t what Yung is after here; rather, the second chapter entitled ‘A Lonely Person’ in particular tells of how Ting was unceremoniously dumped not long before he meets Jiamei by a girl whom he had a sweet and soft spot for.

Finally, there is Chong-sir (Aaron Kwok), a Regional Crimes Bureau detective assigned to Jiamei’s case with his partner Smoky (Patrick Tam). Like Kwok’s recent ‘detective’ roles, this one comes with its own quirks – not only is his physical appearance, complete with an unflattering crop of graying hair, rumpled clothes and ill-fitting glasses, slightly disorientating to say the least, Chong-sir loves to take his own picture using a Polaroid camera at murder scenes and the homes of other people he interviews as part of the investigation. As much as Jiamei’s is an open-and-shut case, Chong-sir is intrigued by just how a young girl like Jiamei would end up in such a predicament, that curiosity driven in part by his own role as a father.

Like we said earlier, Yung chooses to tell his tale by moving back and forth in time, and that choice of narrative structure does take some time to get used to, to say the very least. As its title suggests, the first chapter ‘Seeking Mei’ is probably the most disjointed, comprised of scenes that do not intuitively gel with each other; the middle chapter gets slightly more coherent, in part because it is also where the past and present timelines meet and things happen in a more linear fashion. But altogether, the film demands a fair bit of patience and focus on the part of its viewer to keep seemingly disparate events in mind with the promise that it will all start to make sense towards the end.

Amidst the somewhat uneven and inconsistent pacing however is an absolutely consistent sense of ennui, sadness and even anguish. Jiamei, Ting and Chong-sir are all lonely individuals in their own way – one who finds her hopes of companionship dashed by a ‘bastard’, one who finds his feelings unreciprocated, and one who has become estranged from his wife (now ex-wife) and daughter over the years because of his work. The world they inhabit is similarly bleak, captured by cinematographer Christopher Doyle in all its harsh beauty whether the gritty alleys or cramped working-class apartments where isolated souls are faced with their own misery.

Especially defined with acute poignancy is Jiamei’s growing disillusion with life, meant undoubtedly as a symbol of a whole segment of youth who are searching for purpose and fulfilment in their lives but who come out empty. Yung draws attention to their plight and that of teenage sex workers in uncompromising fashion, and those hoping for a happy ending will find that there is no redemption in store for our characters here. That we feel so deeply for Jiamei is also credit to newcomer Jessie Li’s heartfelt performance, conveying her character’s fragility, melancholy, desolation and eventual despair as a result of her displaced upbringing as well as her displacement from society. Li is matched by an equally gripping performance by Ning, who brings pathos to his loner character so that we feel for Ting than regard him as a psychopath.

Oh yes, though Kwok receives top billing as a natural outcome of his star wattage, the film really belongs to his younger co-stars Li and Ning. On his part, Kwok plays the part of the audience surrogate dutifully, introducing us to the empty world and listless lives that Jiamei and Ting lead. Compared to the latter two, Kwok’s character is the most underwritten but the actor injects enough humanity to make Chong-sir a nice complement to Jiamei and Ting. But Kwok’s contribution probably goes further – were it not for him, it is unlikely that ‘Port of Call’ would have been made, especially since it can hardly be considered entertainment, let alone be called mainstream.

That’s not to say that the film is perfect; that it most certainly isn’t, and for one, it isn’t hard to imagine a much more powerful film if the storytelling were more focused and the characters more well-defined. Yet there is something hypnotic and mesmerising about it, about the way it portrays the state of disfranchised youth in society, about how it gives voice to their frustrations, anxieties and hopelessness, and most of all about how relevant it is. It is for these reasons that ‘Port of Call’ stays with you long after the credits are over, provoking you to think about the Jiameis and Tings in our midst and what we can do to avoid the tragedy that brought this film to being in the first place. It may not be the best Hong Kong film you’ll see this year (notwithstanding its official submission by the territory to the Oscars), but it is probably one of the most significant.

(Unwaveringly bleak and sombre, this meditative piece of social commentary masquerading as crime thriller is compelling and hypnotic in spite of its flaws) 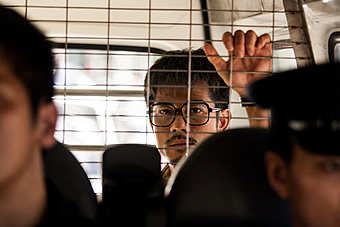 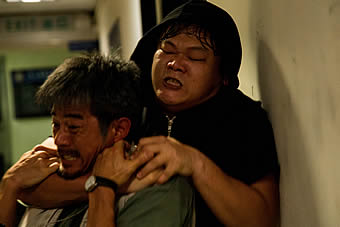