Synopsis: Lung, Tai, Suk-yi and William are happy-go-lucky employees of a broadband network company who muddle their way through each day at work. When massive layoffs are expected, they pledge their loyalty to the company by signing up for the newly formed dragon boat team. When they embark on the training, they are inevitably forced to face their respective mid-life crises. As they rekindle their long-lost fighting spirit, they begin to welcome these challenges in life.

Men On The Dragon is a rarity. With the lucrative Mainland market just across the border, it’s a miracle these days to find a Made-in-Hong Kong movie that is blessed with an entire cast made up of Hong Kong actors and actresses.

Veteran HK actor Francis Ng stars as Lung, a happy-go-lucky cable installation technician who along with his fellow colleagues, Suk-yi (Poon Chan Leung), William (Wu Tze Tung) and their boss, Tai (Kenny Wong) are tasked by their ailing telecom company to form a dragon boat team to represent their company in an upcoming dragon boat race.

But when another round of massive layoff is expected to be around the corner plus their individual personal problems start to surface, our group of middle-age men realized that the only solution to overcome their problems is to listen to their very own heartbeat.

Co-written and directed by screenwriter turned director Sunny Chan, Men On The Dragon could easily been a comedy flick about a group of underdog sportsmen who triumphed in the sports arena and their personal lives before the credits roll. But Chan prefers to emphasize on the realism of everyday life and the ups-and-downs of society instead of a plain wacky comedy.

Francis Ng’s Lung is secretly in love with his neighbor, a single mom named Carol (TVB regular Nancy Wu) whose partner is always not around. Lung willingly cooks for Carol, acts as a surrogate father to her teenage daughter and even went around soliciting money to buy a house with a sea view for Carol hoping his feelings be reciprocated.

Suk-yi on the hand is caught in a daily war with his wife who hailed from China and his own mother that he longed to get out of the situation. When the coach from their dragon boat team is a young attractive lady, Dorothy (Jennifer Yu), Suk-yi starts to take a liking to her.

When it comes to their cocky boss, Tai is slowly developing a meltdown when he found out that his wife is planning to leave him for a fellow colleague. The youngest of them all, William has to forsake his love for competitive table tennis in order to please his girlfriend who prefers he has a regular stable job.

Of course, it is to Chan and Feel 100% Joe Ma’s credit that Men On The Dragon has a much more meaningful message in portraying the authenticity of suffering middle-age men in Hong Kong than anything else. It’s with this aspect, the zero to hero tale mostly reduced the dragon boat stuff to more of an afterthought as the movie struggles to balance social messages with sports. Even then, the narrative lacks the vibrancy to sustain as the screenplay is overly ambitious to juggle four individual stories that every story angle is hastily wrapped up in the end.

Though he is the most familiar cast member, Francis Ng ever the consummate performer is outshone by stage actor Poon Chan Leung whose Wong Suk-yi’s character is always in some memorable awkward situations liked securing Andy Lau’s concert tickets (a recurring gag) and getting hanky panky with Dorothy.

(The dragon boat racing is a weak throwaway plot mechanism, although the movie is packed with interesting characters with sad problems) 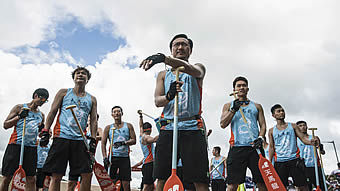