Synopsis: An action crime thriller revolving around a large-scale nationwide financial fraud. The notorious scandal shook the country to its core when the investigations revealed even the high-ranking bureaucrats were involved. Jin Hyun-pil is the silver-tongued head of an extensive scheme organization. Kim Jae-myung leads the Intellectual Criminal Investigation Unit with charisma and detail oriented personality. And Park Jang-gun is the genius brain behind Jin's scheme, whose dream of hitting the jackpot ends in being caught between Jin and the Investigation Unit.

The latest cat-and-mouse Master by director Cho Ui-seok is a formulaic crowd-pleaser. We enter the chess game between dogged detective and colourful villain in the middle of the set, but still get rewarded with the diet of car chases, double-crossing maneuvers, some gunfight, and an exotic locale - in this case, Manila, Philippines.

The standard recipe has worked well though, garnering over 6 million viewers thus far, surpassing even the mighty Rogue One. It would seem that Cho’s skill in action movies is still an active commodity, especially on home ground South Korea. This is also in part due to his knack in casting, and in Master, he has Lee Byung-hun and Kim Woo-bin to thank for keeping this film from being overly mechanical.

The illustrious Lee has often been on right side of the law, but in Master, he plays President Jin of ONE Network: a multi-level marketing company that taps into the hopes and dreams of the working class. He comes off like a visionary, the Steve Jobs of timeshare, peppering his spiel with “family”and “dreams” like the consummate leader selling a pipe dream should. Of course this is all a ruse, with him bribing influences in his network to gain more credibility from the common folk, before closing it all and absconding with billions.

Aiding him is the flaky Park Jang-gun (Kim), who facilitates the shadowy transactions and business as a software genius hacker. He pretends to be the IT architect of ONE, while trying to squirrel away some of the transactions himself as a petty thief.

All this is not unnoticed, as the Financial Crime Unit’s chief investigating officer Captain Kim Jae-myung (Gang Dong-won) has been tracking their activities for a while now, and we enter Master when he has nabbed Park for questioning, cornering him to be his mole, in a bid to get a piece of evidence that will damn the wily Jin for good.

Of course, Jin escapes, and the reason for us starting mid-way through the first story is now clear, as Captain Kim restarts his entire operation underground to recapture Jin again, now presumably dead. This is where it can get a little dull, as we watch the detective rebuild his network to chase down JIn again. Gang makes for a very pretty lead, but even then, his robotic character is unyielding and hardly moving, even to the point of making us feel a little for Lee’s villain Jin a little more in some cases.

Lee’s Jin is fun to watch, as all good villains should be, and in his manipulation and meaningful looks, keeps us guessing as to his level of stratagem. But at parts, his material keeps him a little confused - sometimes the ruthless master villain, sometimes, well, just a philosophical con-artist. Maybe the level of legerdemain has confused even Cho and Lee themselves, but fortunately the lapses do not overly detract.

As the software expert, Park is what keeps Master from going rote. Kim injects his character with an unlikely goofiness. With split-second clownish faces, flappy hands and a wise-cracking sentimentality, Park going renegade is amusing and refreshing, as he gets pulled at from more than one side (yes, there is another introduced at the latter half). Kim is known for being an idol, but he totally inhabits this role and shows his talent in acting and characterisation.

Also interesting is the locale for the second segment. Manila hasn’t been picked often as a film location, no doubt due to its notorious lack of infrastructure and limited landmark recognition, but Cho has cleverly picked the slum area of Tondo and the Manila Cathedral as his backdrop, giving the final sequences a novel spin.

Master will no doubt delight K-fans with its familiar treatment and polish, but will also be a recommended entry movie for those wanting something a little different from the Hollywood fodder.

(A slick production with choice actors give this crime thriller a needed boost to its conventional story line. Kim earns two thumbs up for his portrayal) 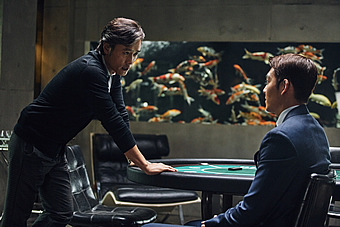