Synopsis: In Disney’s “Mary Poppins Returns,” an all new original musical and sequel, Mary Poppins is back to help the next generation of the Banks family find the joy and wonder missing in their lives following a personal loss. Emily Blunt (“A Quiet Place,” “The Girl on the Train”) stars as the practically-perfect nanny with unique magical skills who can turn any ordinary task into an unforgettable, fantastic adventure and Lin-Manuel Miranda (“Hamilton,” “Moana”) plays her friend Jack, an optimistic street lamplighter who helps bring light—and life—to the streets of London.

54 years after author P.L. Travers’ titular nanny arrived on the big screen, Mary Poppins returns for a sequel which tries so hard to capture the charm and magic of the original that it doesn’t care if it comes off anachronistic as a result. Oh yes, no one will likely accuse director Rob Marshall for failing to treat the beloved 1964 film with insufficient reverence, and those who remember it will surely recognise the echoes everywhere of what came before – including a lamplighter named Jack (Lin-Manuel Miranda) who will remind you of Dick Van Dyke’s chimney sweep Bert; an eccentric relative of Mary’s named Topsy Turvy (Meryl Streep) who is reminiscent of Ed Wynn’s airborne Uncle Albert; and last but not least, the famous animated set-piece involving a sidewalk chalk drawing that is reinterpreted here as a trip inside a china bowl.

We’ll be Blunt – if you’re up for another helping of the undeniable charms of ‘Mary Poppins’, then you’re in for a delightful, even supercalifragilisticexpialidocious, time; but if familiarity is your equivalent of monotony, then you’ll likely be unimpressed by Marshall’s painstaking re-creation of the style, tone and beats of his predecessor. Yet you can hardly blame him for keeping with legacy, not least because of the burden of expectation from two or three generations of audiences who have grown up with that Disney touchstone, for whom the names Michael and Jane Banks and/or their Cherry Tree Lane house will instantly strike a chord. These two Banks were the children from the original, with Michael (Ben Whishaw) still living in the family home with three moppets of his own that his sister Jane (Emily Mortimer) helps to look after.

Writer David Magee sets the movie 24 years after the action of ‘Mary Poppins’, against the backdrop of the ‘Great Slump’ in the 1930s. A struggling artist working part-time as a teller at the Fidelity Fiduciary Bank where he has taken a loan against the house, Michael has missed a number of successive payments due following the death of his wife, and is now fighting to dodge foreclosure. That consequence is particularly upsetting not just for Michael but also his three children – John (Nathanael Saleh), Annabel (Pixie Davies) and Georgie (Joel Dawson) – given the memories that it holds with his late wife/ their late mother. Amidst their grief, gloom and anxiety, Mary Poppins (Emily Blunt) announces unannounced and uninvited to bring joy, cheer and hope back into the household, arriving from the sky on a kite that Georgie was pulling on an unusually overcast and gusty winter day.

Thanks to Mary’s magic, the kids get to go on a series of imaginative adventures: a bathtub plunge leads to an undersea kingdom, complete with all manner of ocean life and a pirate ship; the aforementioned painted Royal Doulton bowl that the children break in the midst of a heated argument becomes a colourful adventure blending live-action and hand-drawn 2D animation, where they will meet swirling bluebirds, cheerful livestock and a scheming wolf; and a visit to Topsy reveals a house that turns itself upside down every second Wednesday of the month. These flights of fancy will snap the children out of their despair, and motivate them to help their father find a way out of their predicament; most notably, to make a surprise visit to the office of the bank president William ‘Weatherall’ Wilkins (Firth), where they will overhear of his unkind manoeuvrings intended at ensuring that their family is eventually evicted.

The MacGuffin here is a certificate that proves Michael’s father had left them shares in the bank, which could very well be enough to repay the outstanding loan. Just as you’d expect, the said certificate remains frustratingly elusive right up till the very last minute, whereupon a climactic rush ensues to deliver it to Wilkins before Big Ben strikes midnight. As much as we think Mary would prefer to use her magic judiciously, we wonder why she doesn’t simply use her magic powers to get Michael to Wilkins’ office, instead of letting him cycle all the way from Cherry Lane to the bank and/or making Jack and his band of lamplighters risk their lives scaling the sides of Big Ben to buy Michael some extra time. And what about the last-minute appearance of Van Dyke’s elderly banker Mr. Dawes Jr., who shows up conveniently to save the day and demonstrate that he is still an able dancer at the ripe old age of 92?

To say that the narrative needs more work is an understatement, but it is evident that the overriding prerogative here is to bring on some good-old holiday cheer. It would have been quite impossible for composer Marc Shaiman and his co-lyricist Scott Whitman to top the Oscar-winning songs and score from the Sherman Brothers, and while they don’t, there are a couple of good numbers which Marshall turns into some infectiously fun sequences – in particular, ‘Trip A Little Light Fantastic’ sees the lamplighters engage in everything from acrobatic stunts to BMX bike tricks as they lead the children home through the fog, and ‘A Cover is Not the Book’ is a lively music-hall dance number performed on a stage made up of giant books. Amidst the jolliness though, the movie does hit a couple of poignant notes, especially with the lullaby ‘The Place Where Lost Things Go’ which Mary sings to the grieving children to tell them that their mother lives on in their memories.

That number shows how beautifully Blunt hits both the musical and emotional high notes, and it is a pity that the ceaseless stream of digressions, side trips and interludes keep us from getting to know Mary better. She is as much a mystery by the end of the film as she was at the start, to the extent that we’d say we don’t actually know enough about this version of Mary Poppins to make an informed comparison with that of Julie Andrews’ earlier rendition. Ironically, we know more about Jack and the torch he carries for Jane, which is also a validation for Miranda in his first major screen role. Whishaw is unfortunately side-lined for much of the movie, and we wish it had spent more time developing the relationship between Mary and Michael as a contrast to what it was when the latter was just a child. In place of depth though are some gratifying one-scene cameos, including that of Streep, Van Dyke and Angela Lansbury.

Some would argue that the world of Mary Poppins is just the kind of great Disney entertainment that we need in these troubled times, and indeed ‘Mary Poppins Returns’ does contain more than a spoonful of sugar to offer some delightfully transportive pleasures. Though arriving more than half a century later, this sequel deliberately chooses to trade in nostalgia, which explains why it is structurally and stylistically modelled after the 1964 original. There’s nothing inherently wrong with that, especially if it’s a feeling of childlike whimsy and wonder that you’re after, but we’d be lying if we didn’t say that we wished that the movie had traded in some measure of familiarity with novelty. At least there is charm, if not magic, in the tale, and we suspect for those who loved ‘Mary Poppins’, that will be more than enough.

(Structurally and stylistically slavish to the 1964 classic, 'Mary Poppins Returns' casts a charming, but altogether familiar and not quite so magical, spell that still brings good old-fashioned cheer) 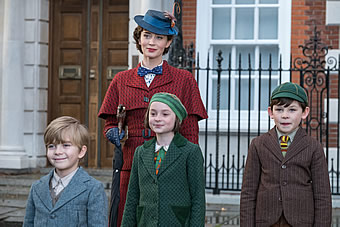 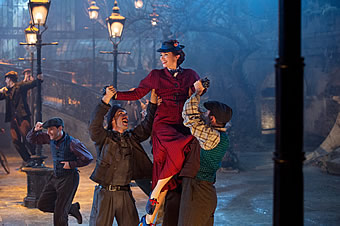