Synopsis: Based on a novel by Japanese writer Juko Nishimura, tells the story of prosecutor who is framed for robbery and rape and sets out on a one-man mission to clear his name.

Manhunt opens in an idyllic town whereby we see our leading man, corporate lawyer Du Qiu (Zhang Hanyu) walks into a traditional Japanese bar to have a sake. He has a heartening talk mainly about old classic movies with the bartender before all hell break loose. The brief prologue showcases two things, one Manhunt is a loose remake of the 1976 Japanese classic starring the late Ken Takakura and two, action maestro John Woo is back in familiar territory after helming two period dramas, Red Cliff and the disastrous The Crossing.

Diehard fans of Woo will have trouble relating to his latest venture- a part detective thriller and part actioner that goes absolute bonkers in the climax. Aside from his acclaimed gun-fu action sequences, Woo’s strongest forte is his theme about brotherhood and friendship. Just liked his past collaborations with Chow Yun Fat and Ti Lung, Nicolas Cage with John Travolta, in Manhunt, he pairs up Zhang Hanyu (Operation Mekong) with Japanese actor/popstar Masaharu Fukuyama though both respectable actors are frequently letdown by the awkward mix of Japanese and English dialogue.

The story is about Du Qiu being framed for a murder he never commit while Fukuyama plays a smartass detective assigned to take him down. If this is a simple good versus evil kind of actioner and Woo’s job is to bring in the white doves and wham-bang then Manhunt will be a much enjoyable ride. Unfortunately, the story is riddled with unnecessary subplots and characters. Let’s see we have Mayumi (Qi Wei), a widow who is out to find out the truth behind her scientist husband’s death. A pair of genetically enhanced assassins, Dawn (played by Woo’s daughter, Angeles) and Rain (Secret Garden’s Ha Ji-won). Last but not least, a pair of sinister father-and-son pair of Tenjin Pharmaceutical with also corrupt cops in the force. The supposedly crime thriller slowly turned itself into a hot mess that the only thing that brightens up is waiting for the next bloodshed to appear on the screen.

For those looking for some trademark Woo’s action moves, patience is very much require as the real action doesn’t really kicked in until almost an hour into the movie. After a fistcuff involving a cageload of doves being set free, the next action major sequence is the widely touted jet ski chase which is hampered by nothing but bad CGI. The only memorable action scene happened at a farmhouse where we encounter a bunch of assassins on bikes trading guns, samurai sword and blows with our two handcuffed heroes. The finale which took place in an enclosed laboratory environment sees a ludicrous serum which turned ordinary folks into super soldiers at work, a stark reminder that Woo shouldn’t touch anything relating to sci-fi (Watch Paycheck).

Despite the onlocation shoot which mainly took place in Osaka and the participation of many Japanese talents liked cinematographer Takuro Ishizaka, production designer Yohei Taneda, Manhunt seems to lack the usual flair seen in Woo’s The Killer, Hardboiled or even Face/Off. The story is way off, characters look stilted and the action simply a rehashed of Woo’s better moments. This could easily be the comeback effort of John Woo but it seems he is relying too much of his old glorious past to make much of an impact. In fact, it’s a soulless Woo movie that’s not going to be remember by fans down the road.

(All the slow-mo, white doves and double guns are here, what’s lacking is a true blue John Woo movie) 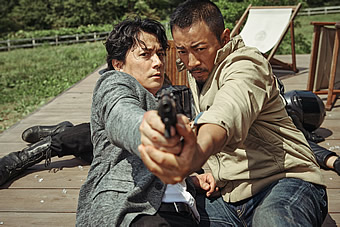 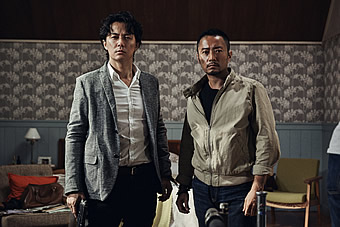 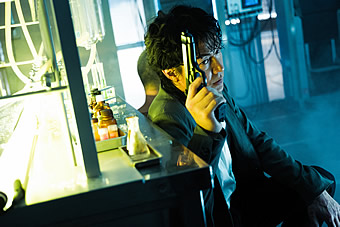