Synopsis: “Moteki” is...a period in one’s life when a person is most attractive to the opposite sex. Fujimoto, 31, has no money, no aspirations and no girlfriend. Leaving his temp job, he decides to finally get a life and lands a job as a writer for an Internet news site. But love eludes him. At the height of his loneliness and social isolation, out of nowhere springs his season of irresistibility – the arrival of “moteki”. Miyuki, a fun and gregarious magazine editor, who shares a lot of Yukiyo’s interests but has a boyfriend. Rumiko, Miyuki’s close friend, a pretty but obsessive office worker. Ai, a gaudy young bar hostess. Motoko, Yukiyo’s senior colleague, a cool beauty with an acid tongue. Between these four very different women, Yukiyo gets pushed and pulled in all directions. But will Yukiyo reach the elusive promised land of true love?

Love Strikes! (or commonly known as Moteki!) is a manga turned 12 episode long drama turned movie. After about a year long after the run of the drama, director Hitoshi Ohne brings back love-deprived Yukiyo attempts to break away from his ‘second virgin’ identity.

At first glance, the movie seems to be a lame comedy that mocks at the life of a loser, aka Yukiyo (played by Mirai Moriyama). However, it is more than meets the eye! The movie started off with a very succinct introduction of our main character, Yukiyo. It wasted no air time by cluttering us with unnecessary details. Instead, it has successfully set the tone of the movie: sarcastic yet light hearted. Unexpectedly, the movie is embedded with lots of subtle criticisms of a modern city dweller’s behaviour and raises a few thought-provoking issues as well.

One of these was brought up rather extensively and was pivotal to the story, which is the discussion on online identity. Yukiyo met Miyuki (played by Masami Nagasawa) through an online social network, Twitter. As you could already tell from the trailer, Yukiyo is a very social inept person, incapable to interact with people in real life. However, he was able to open up to a stranger, and constructed an alternate identity on the internet. Does this story sound familiar? This is a pretty keen observation and accurate pick up of the trend in modern society nowadays. When people get so suffocated with their real life, they do create an alternate identity to eventually seek comfort and belonging from the (initially) unacquainted.

It also continues to explore the complicated web of relationships that exist in modern society. As much as people want to believe more in the good of humankind and altruistic behaviours, many of these relationships are more often than not relationships based on exchange. If you can provide me this, I will give you that in exchange. This pattern of relationship appears to be pretty prominent in the movie.

One of the greatest successes of this film is that there is not a single dull moment. It kept the audience entertained and engaged through the songs, and generally the development of the plot. Recently there has been some hype about ‘less is more’. But that is definitely the anti-thesis of the movie. The movie is jam-packed with content and comedic elements, songs and lyrics, which simply display the director cum scriptwriter’s flair and outstanding content management. All these elements are easy to follow, and put together with very good coordination. They flow together so seamlessly with the songs that it is very enjoyable and delectable.

Cast wise, it is also a pretty pleasant ensemble. Yukiyo and his primary romantic interest, Miyuki, may not be your typical and ideal onscreen couple, but the chemistry and mood between them was at times awkward, but generally good. This is not their first collaboration together, but in fact they had worked together in the “Crying out from the centre of the earth”, a melodramatic movie released in 2005, which received quite a couple of recognitions. Also to mention, this both Mirai Moriyama and Masami Nagasawa received award for their roles in Love Strikes!. The supporting actresses are also to watch for, although Naka Risa (as Ai) seemed more like a calefare (aka bit-role actress).

All in all, Moteki! has achieved a great balance overall. It is highly entertaining, with a good mix of the so-called cheap humour and as well as the subtle ridicule on ourselves. It is definitely a highly entertaining movie from the land of the rising sun which provides an escape from the typical stifling Singaporean lifestyle. Oh and sorry to disappoint some potential viewers, as much as it is marketed as a ‘sex comedy’, there really isn’t any ‘real action’…

(Have you had your MOTEKI yet? If Yukiyo had it, so can you!) 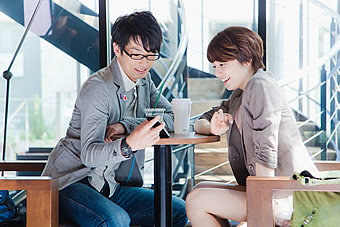