Synopsis: After the embarrassing divorce ceremony, Hyun-woo returns to the single life that he dreamed of and hopes to enjoy his freedom forever. Just six months later, Sun- young comes back into his life as the love interest of Sang-chul, an old friend from high school. The funny reality of Hyun-woo, who struggles to escape from Sun-young’s sudden return and being unable to ignore her when she is in need, evokes empathy in real-life situations.

Singaporeans first got to know Kwon Sang-woo via his hit drama series, Stairway to Heaven and movies liked Running Wild, Almost Love and 71 Into the Fire. He was indeed a huge star back in 2003 to 2009 until his self-imposed hiatus and other younger Korean stars liked Lee Min-ho and Rain overshadowed him. But Kwon looks like he is back in the limelight in this romantic comedy Love, Again and miraculously, he doesn’t seem to age a bit and still as fit as ever.

In the opening scene, we see Hyeon-woo (Sang-woo) and Seon-yeong (Lee Jung-hyun from The Battleship Island), a supposedly married couple having a minor argument. Shortly in the next scene, we see the two in the midst of a divorce ceremony. And fast forward six months later, Seon-yeong is still craving for Hyeon-woo’s attention and care even though the latter prefers to move on and have a clean break with his ex-wife until a drunk incident causes Seon-yeong to fall in love with an old classmate of Hyeon-woo, veterinarian Sang-choel (Lee Jong-hyuk).

Love, Again is first and foremost a romance comedy but also a zany study on two similar-minded individuals who practically can’t live without the presence of each other came to a divorce only to realize it might be a bad thing after all. This sounds like a predictable Korean drama or a feeble attempt at a weepfest. In some situations however, cliched or foreseeable might not a be a bad thing after all.

Director and writer Park Yong-jib (Miss Gold Digger) generally keeps the entire pacing light and breezy. The humor and exchanges between the squabbling Hyeon-woo and Seon-yeong for sure is contagious as they argue over the smallest thing. Who is the victim in their relationship? Is it Hyeon-woo who is great at marketing underwear but neglects the wife he married? Or Seon-yeong who works as a movie translator, dreams of a loving life but has a terrible temper? Is Sang-choel going to be the one for Seon-yeong in the end?

Suffice to say, there are formulaic tropes that simply can’t be shaken off and Love, Again gets a bit wobbly and draggy in the last quarter as the movie starts to flashback to the couple’s happier times before the ending. Fortunately, Kwang Sang-woo is matched beautifully with Lee Jung-hyun. Their screen presence and chemistry is so appealing that you are going to have a ball of time with them despite the so-so proceedings. Lee Jung-hyun who actually worked with Sang-woo way back in 2004 in Once Upon in Highschool makes audiences root for his kind, honest veterinarian character. Then there is veteran Sung Dong-il (Metamorphosis) portraying Hyeon-woo’s no-nonsense superior and Park Kyung-hye as the overzealous Nurse Kim who provides a few moments of comic-relief.

Love, Again is a rom-com that never really take any chances yet manages to pack in a sizeable amount of fun and tears throughout. Those who missed Kwang Sang-woo on the big screen will find that he is back in form and his comic-timing (a genre which he hardly touches) is near perfect. Though the flick doesn’t reach its full potential, choosing to remain as fluffy as possible, those desiring an easy time in theatres won’t mind the company of this quarrelsome couple.

(For a guy who normally shy away from rom-com and paint-by-number dramas, Love, Again comes recommended if you are not expecting too much) 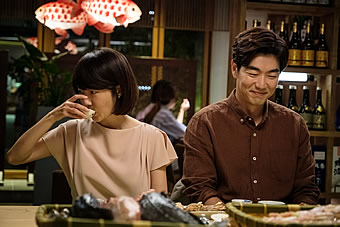 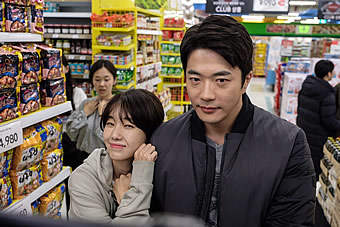