Synopsis: In the vast space, an astronaut has suddenly lost contact with the mission control center. In the darkest hour of his life, he recalls the lessons taught by his father... Filled with love and affection, warmth and wonder, tears and joy; this is a penetrating and artistic depiction of familial bond, underscored by a set of life value messages.

There’s no punches pulled here - Looking Up is a China-made film, replete with pride-stirring messages that can be seen as gentle nostalgia or shameless propaganda. If you can set that all aside, there’s a couple of universal themes here at play which might be of more interest.

Ma Fei (Bai Yu) is one of the two astronauts that China has sent to space. The boyishly handsome captain beams with pride, only to turn misty-eyed when asked about his missing family during the press conference. As he takes off into space, muttering about bows and arrows, we are treated to an aged figure staring at the spacecraft. This is, of course, Ma Haowen (Deng Chao), his father.

We see a younger Haowen taking up the Olympic Baton before a grand bridge. Pausing in front of the structure he designed, the famed architect grabs his son out from a celebratory performance and passes him his birthday gift of a football globe. Just as everything was going swimmingly, to everyone’s horror, the bridge collapses at the opening ceremony.

The disgraced architect is jailed, and for the good of his loved ones, relinquishes custody and marriage. His wife Xin Yu (Ren Suxi) remarries into money and sends Ma Fei to a prestigious school to get a second chance in life. Alas, the boy is easily distracted and filled with angst - nothing like the man he is destined to become.

His change comes about when Haowen returns after serving his time, and through unorthodox methods and unfailing encouragement, the hardworking father manages to do the impossible and transform his kid into one of the best students in the school.

So when met with a major accident in space that causes a communication outage, and possibly faced with a slow death in space, the young astronaut recalls the lessons of his estranged father and tests his capabilities one last time.

When talking about the main theme of education, Looking Up represents the country’s recognition of critical thinking lacking in the system. Especially for Asian countries, the dead-set methods of memorisation has been often called out for destroying the real process of learning - creating robotic citizens than releasing full potential.

Haowen’s contrast of the inspiring parent as opposed to the more-typical Tiger mum in Xin Yu, also fuels the movie’s thrust in beseeching for a more compassionate approach. In the rapidly-developing China, this would no doubt resonate, as values start to shift towards western influences.

But to the audience elsewhere, this message feels trite and redundant. And yes, though we are still talking about inspiring creativity and “design thinking” as concepts we want to inject, the discourse about a book-smart person having less value is already long over.

So what is left is really a family story on perseverance and love. And that shines a little brighter, even if the messaging deafens the more intimate relationships the characters build through the film.

Ren is particularly good as she layers steely exterior with a loving concern, one that most of us are all too familiar with. Sun Xilun as the young Ma Fei is also charming with his easy performance, if a little affected at times.

The problem with Looking Up, can be likened to putting a pastry chef in a hot kitchen. Having a similar skillset and valid recipes does not guarantee a good dish. The film is formulaic to a fault, displaying predictable tropes and standard developments. All this would be a little easier to take, if not for two big issues. The fact that the content is repetitive, and the movie runs just shy of 2 hours and 30 mins. That’s just way, too, long.

Deng Chao does double-duty as director, and Yu Baimei is his partner. The pair struggles with finding an even tone, veering sometimes towards Chow-esque comedy, then the next - Han Han type of quirk. The characters also struggle with gravity, with - surprise, surprise - most of the weight on Deng’s Haowen. It’s a grossly miscalculated favouritism, making it seem more like a vanity project.

And it doesn’t stop there. With the references to Hong Kong and Tibet (most of the time superfluous), it makes the viewer shift uncomfortably in their seats making this seem even more of a project with agenda than true entertainment. Add to that a didactic script riddled with awkward scenes of exposition (that initial conversation about the accident between the two astronauts is excruciating), Looking Up has aptly titled itself in its vantage as a lacking entry in the charts.

(Age-old comeback story entertains still with some great characters, but fails to gain full speed due to poor scripting and a maladjusted tone) 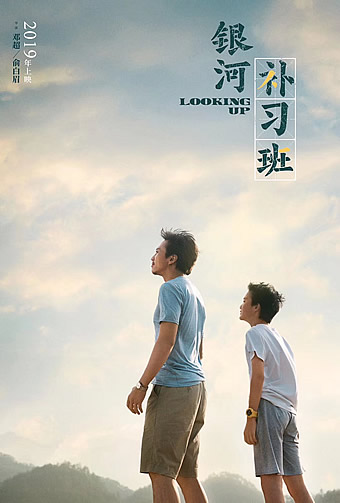 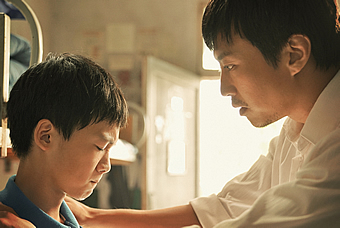