Synopsis: After the 1969 nationwide floods, Zhao Di takes over her father’s family farm with the help of reformed gangster Ah Long. In 1977, the Government begins expropriating land for redevelopment, forcing villagers from their kampongs. Licensed farmland owners, such as Zhao Di, are financially compensated for their land. Ah Kun, Zhao Di’s greedy brother accuses Zhao Di and Ah Long of having an affair to tarnish her name in front of the family. In the midst of Ah Kun’s persistent accusations, Zhao Di’s health takes a hit. Will Zhao Di be able to keep her hard-earned compensation money? What will become of her family if Zhao Di’s health continues to deteriorate? As people change with time, will the kampong spirit remain?

Of late, Jack Neo’s stories have gotten longer, but in the case of ‘Long Long Time Ago’ at least, we can reassure you that it isn’t because he has gotten more long-winded.

For the uninitiated, the two-part saga of the trials and tribulations of a family living through the early years of Singapore’s independence is Neo’s ode to a bygone era in Singapore’s history.

Zhao Di (Aileen Tan) is the eldest daughter, gentle, restrained yet quietly resilient; while Ah Kun (Mark Lee) is her second brother, an opportunistic good-for-nothing ingrate who not only gambles his time away but is consistently getting himself and his family into trouble. Their conflict was the backbone of the story and character dynamics in the first movie, and comes to a boil here as greed takes hold of Ah Kun.

The trigger here is the Government’s relocation of citizens from ‘kampungs’ to HDB flats, in order to free up land for national development. Along with that move comes the promise of a generous compensation package, depending on the amount of land that would be expropriated as well as the ‘activities’ on that land such as pig farming etc. Though he had never lifted a finger to help Zhao Di turn their barren front yard into a modest pig farm, Ah Kun demands a share of the compensation that would be given in exchange of the ‘pig farming’ licence, and even goes so far as to smear Zhao Di’s good name in order to get their family and extended relatives on his side.

Like we’ve said about the first movie, Tan and Lee are some of the most seasoned local performers and continue to shine in their respective roles. The usually glamourous Tan deftly underplays her uncharacteristically subdued role with nuance and grace, never once stooping to hysterics to win her audience’s sympathy. On the other hand, Lee was born to play the brash, hot-headed lout, and it is to his credit that we end up loathing his character as much as we sympathise with Tan’s. Lee’s scenes with Tan are easily the most engaging in the whole film, and it is also in these scenes that Neo holds back the distractions (think: product placements) to allow these two excellent actors to communicate their characters’ frustrations, disappointments as well as, in the case of Ah Kun, remorse with absolute clarity.

In contrast, the other narrative strands are understandably – but also regrettably – less fleshed out. Ah Hee’s interracial relationship and eventual marriage with Rani (Bharathi Rani) fares best relatively, but Neo treats the potentially controversial subject as comic relief (read: Rani happens to be former health inspector Shamugen’s (Silvarajoo Prakasam) daughter) than any serious-minded discourse on the possible tensions that could arise from differences in culture and language. Ah Long’s (Ryan Lian) budding romance for Zhao Di never quite goes anywhere, but the most severely underdeveloped subplot has to be Osman’s (Suhaimi Yusof) falling out with his teenage son Ahmad after the former smashes the latter’s guitar in a fit of anger.

Juggling the sheer number of characters is no small feat, and inevitably some like Ah Kun’s wife (Charmaine Sei) or Osman’s wife (Nurijah Sahat) will not get much to do at all. Yet as much as one is willing to extend such concessions to the sprawling script by Neo and two of his regular screenwriting collaborators Link Sng and Ivan Ho, it is no less lamentable that Wang Lei’s Si Shu and Osman are almost completely sidelined here, squandering what time and attention had been placed on developing their characters the first time round. Oh yes, Ah Kun’s resentment of Zhao Di’s modest successes is compellingly drawn, but every other detail feels a little undercooked to say the very least.

If there is one consolation, it is that this second part doesn’t strain as much as its predecessor does in trying to fit the iconic moments in Singapore’s history into its narrative. Aside from the passing references to Wang Sa and Ya Fong’s comedy skits on local black-and-white TV, the only milestone which Neo flag-checks here is the relocation of ‘kampong’ dwellers into HDB flats, which in turn allows Neo the time and space to properly acknowledge its significance to the thousands of affected individuals – and we are not just talking about the thrill of riding up and down for the first time in a lift but also the drastic change in one’s living environment and livelihood.

No other director has quite so ambitiously tried to capture such moments in Singapore’s fifty years of phenomenal change, and there is no denying the passion, conviction and commitment that Neo brings to the film as a whole, notwithstanding his persistent weaknesses as a storyteller. Indeed, Neo still cannot resist being didactic at the very end, but there is still a perfectly engrossing family drama to be enjoyed, complete with an exemplification of the oft-mentioned ‘kampong spirit’. ‘Long Long Time Ago 2’ brings Neo’s story of Singapore and Singaporeans to a stronger finish than we would have ever expected, and that alone is reason enough to get your family, your friends, your fellow Singaporeans, your fellow non-Singaporean residents to enjoy, appreciate and discover a uniquely Singaporean slice of history come alive. 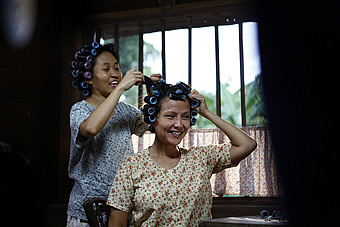