Synopsis: A woman with a rage disorder uses a special electrode device to shock herself anytime she feels the urge to act out her murderous fantasies. Unable to find love in a world that fears her unique condition, she finally falls for a man who accepts her for who she is, only to find him murdered the next day. Enraged, she goes on a revenge-filled mission to find the killer, while also being hunted down by the police as the prime suspect.

Since young, Lindy (Kate Beckinsale) has been suffering from intermittent explosive disorder, an uncontrollable powerful rage in which some shady organization hope that can be turned into a weapon. Unfortunately, the various treatments to control her failed badly and now Lindy has to rely on a self-administered shock treatment invented by her therapist, Dr Ivan Munchin (Stanley Tucci) to control her rage.

Prompted by Munchin to form a normal human relationship with others, Lindy finally venture out and found her date in the form of a sweet accountant, Justin (Jai Courtney) but her happiness is short-lived when Justin is found murdered after two dates. Lindy as expected sets out for revenge crossing paths with two detectives, Vicars (Bobby Cannavale) and Nevins (Laverne Cox) and unleashing her boiling rage and super strength to uncover the mystery behind Justin’s death.

To make up for its trashy and simplistic plot, the filmmakers rely heavily on the charm of Kate Beckinsale to make Jolt works although you can’t deny it’s still a trashy effort in the end. Although Beckinsale has hung up her leather pants for a while, she still has the slick moves and cool look of Selene except this time she is wired with an electrode-laden vest. With most of the action scenes shot in the backlot of a studio in Bulgaria (standing in for New York city), Beckinsale is very much game in tackling the various hand to hand combat and chase scenes despite the less than stellar fight choreography.

The marketing team is selling Jolt as an action comedy. Frankly, we don’t really see where is the comedy coming from. Are they referring to the bickering, fumbling cop couple, Vicars and Nevins who can’t seem to solve anything? Or Lindy throwing newborn babies at Nevins so she can escape the hospital? John Woo uses “babies” as a plot device in the finale of Hard Boiled and that alone is far more appropriate and funnier than this entire movie. And the idea of Lindy electrocuting a baddie’s ballsack probably don’t count as comedy as well.

It boils down to just 91 minutes of runtime but as the body count mounts up, there seems to be a serious lack of interesting ideas until the big twist turned up in the last act. Because honestly, blood and gore can only do so much. Without spoiling the fun for you, Jolt is clearly setting up for a sequel thus the appearance of a major star before the closing credits. For all its ambition however, there’s never a real plot or motivation in the first place to justify a sequel. Yes there is clearly an absurd heroine assembled but a much better motive needs to be in place other than a revenge tale that goes nowhere in particular.

Jolt establishes itself as an energetic, mindless action flick right from the start. There are of course somewhat traces of Jason Statham’s Crank, an adrenalin charged cartoonish action movie. Luckily, Jolt is a more subdued effort in this case. However in order to see Lindy on the screen again, much work needs to be done on the screenplay. For now, if you don’t mind an average check-your-brain-at-the-door actioner, give yourself a Jolt.

(Kate Beckinsale on the whole never disappoints although Jolt is simply a frenetic, forgettable action movie) 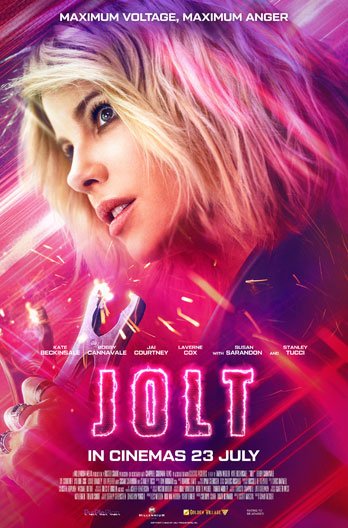