Synopsis: JIRO DREAMS OF SUSHI is the story of 85 year-old Jiro Ono, considered by many to be the world's greatest sushi chef. He is the proprietor of Sukiyabashi Jiro, a 10-seat, sushi-only restaurant inauspiciously located in a Tokyo subway station. Despite its humble appearances, it is the first restaurant of its kind to be awarded a prestigious 3 star Michelin review, and sushi lovers from around the globe make repeated pilgrimage,, calling months in advance and shelling out top dollar for a coveted seat at Jiro's sushi bar. For most of his life, Jiro has been mastering the art of making sushi, but even at his age he sees himself still striving for perfection, working from sunrise to well beyond sunset to taste every piece of fish; meticulously train his employees; and carefully mold and finesse the impeccable presentation of each sushi creation. At the heart of this story is Jiro's relationship with his eldest son Yoshikazu, the worthy heir to Jiro's legacy, who is unable to live up to his full potential in his father's shadow. The feature film debut of director David Gelb, JIRO DREAMS OF SUSHI is a thoughtful and elegant meditation on work, family, and the art of perfection, chronicling Jiro's life as both an unparalleled success in the culinary world, and a loving yet complicated father.

It is a sad but true fact that modern-day society has tended to place too much emphasis on the pursuit of success defined in tangible and even grandiose forms but not so much on the far more meaningful pursuit of perfection. No wonder then that ‘Jiro Dreams of Sushi’, a thoughtful and absolutely inspiring portrait of the 85-year-old sushi chef Jiro Ono, comes like a breath of fresh air, demonstrating the superior fulfilment one gets by putting perfection ahead of success- since it is with the former that the latter will inevitably follow.

As is with most of our readers, we had not heard of Jiro Ono before this documentary, but here’s just a few facts about him to tantalise you. Jiro is the owner of a 10-seater basement-level restaurant Sukiyabashi Jiro accessible via underpass en route to the Ginza subway station. Yet despite the fact that the restaurant has a fixed-menu, serves only sushi, and will set you back a whopping ¥30,000 (or $$480), you have to make reservations at least one month in advance in order to secure a seat.

It’s no secret to reveal that dedication, hard work and perseverance are the ingredients to Jiro’s success today- and Gelb demonstrates this through interviews with a prominent Japanese food critic Yamamoto Masuhiro, current and former apprentices, and of course Jiro himself. Each of these are informative and insightful, yielding different perspectives on the master – or as the Japanese would call him, ‘shokunin’, which means artisan – and among the ones you won’t forget are his exacting ten-year training regime for staff and his constant and consistent pursuit for betterment.

Yet any portrayal of Jiro cannot be complete without his two sons - the elder Yoshikazu mentioned earlier and his younger son Takashi, who runs the restaurant’s only other branch in the upscale Roppongi Hills neighbourhood in Tokyo. Instead of a college education, both sons were trained by their father from young as sushi chefs, and as Jiro himself admits, their tutelage could not have been any much easier than the other kitchen workers who spend hours fanning sheets of nori seaweed over a coal fire or practise making sweet omelette 200 times.

Throughout the movie, Gelb deliberately teases the question of whether the younger Ono, Yoshikazu, is indeed worthy enough to take over the reins from Jiro. It’s not easy trying to live up to the expectations of a perfectionist father (“Jiro’s ghost will always be there watching,” he says with resignation at one point) but the answer as to whether Yoshikazu is good enough, is absolutely gratifying when it comes. Compared to Yoshikazu, less emphasis is paid on Takashi, except to imply that Takashi’s methods will never be the same as that of Jiro’s.

Interesting to note too that Jiro isn’t the only one so passionate about his work- in fact, as Yoshikazu brings us on a tour of the teeming Tsujiki market where the restaurant, like most if not all other sushi joints in Tokyo, gets its catch, it becomes clear that Jiro has been able to keep up such high standards in his food precisely because his suppliers share the same demanding standards over the catch they sell. It’s almost a code of practice between the two parties, and even Jiro’s rice supplier refuses to sell the same rice he does to Jiro to the folks at the Grand Hyatt because he thinks he might as well not let them have it if they don’t know how to cook it.

The attitude displayed by these individuals, including of course Jiro, is truly admirable – and like the people in the film, Gelb’s documentary while multi-faceted in its subjects, remains as its titular character singular of purpose in reminding its audiences the reason for Jiro’s extraordinary success thus far. Of course, there are the requisite mouth-watering shots of freshly made sushi to tantalise your tastebuds, but what ultimately rings loud and true is the very qualities that has gotten Jiro recognised by the Japanese government as a ‘national treasure’.

And as far-fetched as the title may sound, it is actually meant to be taken literally – “in dreams I have grand visions of sushi,” says Jiro, the pursuit of which forms the very essence of his being. We dare go as far as to say that watching ‘Jiro Dreams of Sushi’ is a life-changing experience, one that forces you to reflect and re-evaluate your priorities, to place perfection over success, and to recognise that the pursuit of one’s dreams can truly be fulfilling.

(Both fascinating and inspirational, this portrait of a man in pursuit of perfection is a humbling and life-changing experience) 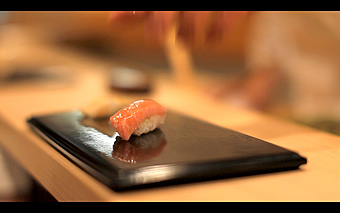