Synopsis: From director Clint Eastwood comes the big-screen version of the Tony Award-winning musical "Jersey Boys." The film tells the story of four young men from the wrong side of the tracks in New Jersey who came together to form the iconic 1960s rock group The Four Seasons. The story of their trials and triumphs are accompanied by the songs that influenced a generation, including "Sherry," "Big Girls Don't Cry," "Walk Like a Man," "Dawn," "Rag Doll," "Bye Bye Baby," "Who Loves You," and many more. These classic hits are now being embraced by a new generation of fans through the stage musical, which has been running on Broadway for more than eight years and has also enjoyed successful tours around the globe.

You have to give it to Clint Eastwood. The cultural icon of masculinity is still directing movies at 84. This reviewer isn’t sure about you, but he isn’t sure he’ll live past that age, let alone do something with his life after being in existence for over eight decades. From modern classics like Unforgiven (1992) to recent productions like Gran Torino (2008), Eastwood is one filmmaker who deserves every budding movie goer’s respect. Although this writer didn’t exactly appreciate the award winning Million Dollar Baby (2004) and the slightly controversial J. Edgar (2011), he was particularly impressed with the angst ridden Mystic River (2003) and the World War II series Flags of Our Father (2006) and Letters from Iwo Jima (2006).

With an illustrious filmography of movies exploring serious themes (racism, war, sports – you name it), it is a surprise to see Eastwood helm a musical. Based on the Tony Award winning musical of the same name, the biographical drama tells the story of the musical group The Four Seasons. Whether or not you’ve seen the stage version (or whether you’re a fan of the infectiously entertaining production), the story is a familiar one – four young men from Jersey’s different walks of life cross paths and come together to form the iconic 1960s rock group The Four Seasons. The story progresses to chronicle their ups and downs, to the eventual breakup and resolution.

If there’s anything that’s signature Eastwood in this 133 minute movie, it’s the crime tinged context involving mafia leaders and shady business dealings. Here you get the always reliable Christopher Walken playing a mob boss looking after the aspiring musicians. You also give points to Eastwood for giving the film a washed out look, and not resorting to excessive to capture the audience’s attention. The rest of this entertaining film is a good old fashioned tale of good friends pursuing their dreams, while finding time to croon a few songs and squabbling over all too familiar reasons.

The group consists of Tommy DeVito (Vincent Piazza), Francesco Castellucio who would later be known as Frankie Valli (John Lloyd Young), Nick Massi (Michael Lomenda) and Bob Gaudio (Erich Bergen). Each actor brings his character to life, with Young being the most comfortable with his role, having played Frankie Valli on broadway (and winning a Tony for it). The character arcs are nothing new to movie storytelling, but it works – especially with Valli’s likeable and DeVito’s sometimes obnoxious personalities.

The film also gets credit for bring the 1950s to 1960s setting to life. Watch out for vintage musical instruments, recording setups and those oh so cool vehicles. The most respectable aspect of the movie, or in this case, Eastwood, is how everything is back to basics: simple storytelling, uncomplicated cinematography, frills free editing and a collection of familiar tunes (to those who grew up listening to hits like “Walk Like a Man” and “I Can’t Give You Anything but Love”).

When the film ends with a wonderfully choreographed sequence starting from the four men singing under a street lamp, you’d be humming and tapping your feet to good ol’ favourites like “Sherry” and “Can’t Take My Eyes Off You”. 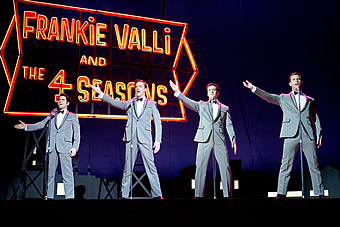 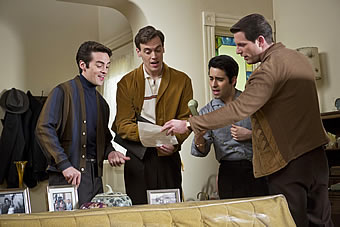 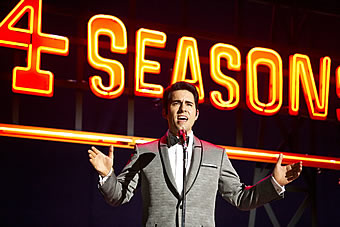