Synopsis: I Wanna Dance with Somebody is a powerful and triumphant celebration of the incomparable Whitney Houston. Directed by Kasi Lemmons, written by Academy Award® nominee Anthony McCarten, produced by legendary music executive Clive Davis and starring BAFTA Award® winner Naomi Ackie, the film is a no-holds-barred portrait of the complex and multifaceted woman behind The Voice. From New Jersey choir girl to one of the best-selling and most awarded recording artists of all time, audiences are taken on an inspirational, poignant—and so emotional—journey through Houston’s trailblazing life and career, with show-stopping performances and a soundtrack of the icon’s most beloved hits as you’ve never heard them before. Don’t you wanna dance?

Not too long after Elvis, a biographical drama enjoyed by five generations with the veneration of the King of Rock ‘N’ Roll, I Wanna Dance with Somebody joins the trend, ringing in the festive cheer.

Has the biopic from the Academy Award nominee and writer of Bohemian Rhapsody, Anthony McCarten, done justice by giving Whitney Houston the stadium-sized gas-up she deserves? Or is it just another biographical musical drama on the bandwagon, with the biopic market flourishing as of late?

The Sony production named after one of her hit songs opens with a surreal live performance where Houston (Naomi Ackie) walks onto stage greeted by tens of thousands of diehard fans. And the scene cuts backs to New Jersey, 1983, where a young and coy Houston is part of a church choir led by her gospel-legend mother. And the film moves forward to touch on Houston’s sexuality as a closeted lesbian where she finds love in Robyn Crawford (Nafessa Williams).

Branded as The Voice and hailed as the Princess of Pop at just 23, the starlet with “stadium- sized vocals” gave the world seven consecutive #1s. Despite all the resplendence, Houston later went on to battle the passive aggressive taunts coming from outside, labelling her as a complete sell-out and bashing her music for not being ‘black enough’.

I Wanna Dance With Somebody, thankfully, doesn’t just pivot on America’s Sweetheart alone as its main character. Kasi Lemmons has nailed the format of an attested and lovingly-made biopic with her classy touch on subsidiary characters that meant so much to the songstress in real life. Cissy Houston, Robyn Crawford, Bobby Brown, Clive Davis and the late Bobbi Kristina Brown are a few to name.

The casting is absolutely on point. The Star Wars actress and BAFTA awardee, Naomi Ackie, was cherry-picked among the rest to play the legendary role. The British actress is also known to have diligently taken dialect lessons to prep for this role. For anyone wondering if Ackie is actually belting out the tunes of the late pop diva, Clive Davis has confirmed that they have chosen to retain the vocal genius of the original singer instead. And for those who have had made attempts in the privacy of their bathrooms will know that mimicking her divine vocals is no child’s play for sure. And the actress who was almost part of the Game of Thrones prequel aces it like a flawless victory. Ackie’s thespian range paired with Houston’s incomparable vocals for all songs masterfully captures the essence of this family-approved biopic that is already sensed belting its way to the Oscars.

The 90s wardrobe rocked by the superstar, from the black and gold matador jacket replica to the voluminous curly up-do wigs that come with a halo and the minutest of the Houston signature gestures is seen nailed by Ackie.

Describing the dreamy sequence of scenes that feature “I Will Always Love You” as ethereal is a mere understatement. With the all-time favourite soul ballad breathing life to the scenes, it all tied in so well. Her wedding held at her palatial $11 million estate in Mendham, New Jersey, in July 1992 with 800 guests, her first-ever film (The Bodyguard), her recording session of that song and the birth of her daughter were epitomical scenes that felt like a gossamer-winged butterfly fleeting under the morning sun.

The scenes featuring the triumph of her “Star Spangled Banner” performance at 1991's Super Bowl XXV, where the fireworks would shortly go up, make up for the length of the film by giving goosebumps all over. And not forgetting the finale where she performs a medley of hits! In all honesty, anyone would find it absolutely hard to resist from springing up and grooving to her tunes on screen and singing along to it.

The teasingly familiar theatrical poster features Ackie dressed in a black leather jacket, white tank, skinny jeans and black ankle boots – the same outfit worn by Whitney for her “So Emotional” music video. As for the trailer, it is quite a penny pincher when it comes to revealing details about Houston’s addiction struggles and her volatile relationship with her abusive ex-husband, Bobby Brown. Nonetheless, when it comes to unveiling some friction with her dad over financial matters and the digs that were taken at her music for not being black enough, the trailer does fulfil its calling.

Just as with any other creative production, I Wanna Dance with Somebody is likely to come with a bag of mixed reviews of yea and nay. Based on the after-movie lavatory talk, a few members of the audience felt that the 2 hour 26 minutes chose to highlight her trajectory as a star rather than as a person and that Lemmons had ended up glossing over the tabloid bits. It isn’t too far from the truth actually. But the temptation to pipe in and remind them that Lemmons has apparently gifted us with this year-end smash hit obviously throwing caution to the wind about the expectations that come with it was rather overriding. Fortunately, the opinion was reserved as no one planned on heading back home with a black eye. And that was exactly when it made more sense to go with the right crowd in order to enjoy this larger- than-life biopic drama, embellished with her unforgettable hits and end the year with a bang that hits just right.

Davis revealed in a recent interview that his overall mission for I Wanna Dance with Somebody is to “present the full story of Whitney Houston impeccably and [ensure] that it will be realistic in every respect.” That being said, every box gets checked.

This film featuring 22 songs in the superstar’s unsurpassed voice embodies a solid cradle-to- grave structure thus bringing justice to all characters (where most of them are alive and kicking) without having to demonise them and dramatises the ever-shining starlet’s accomplishments and life events in chronological fashion. 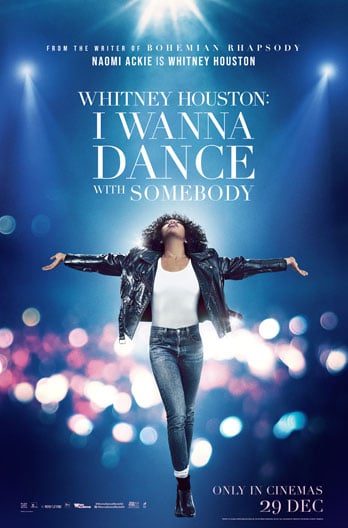