Synopsis: He has the power to control other people’s minds just by looking into their eyes. The greater thing is that people cannot remember what happened during the hypnosis. One day, an unexpected encounter happens during his routine robbery. Gyu-nam is an ordinary worker at a pawn bank, who loves his job and his girl. HE ruins everything Gyu-nam loves and Gyu-nam is the only man HE cannot control. Now, Gyu-nam decides to take revenge and the biggest showdown begins with both men’s lives changing forever.

Superheroes don’t always need to come in the form of Marvel or DC Comics characters; rather, they can just be everyday individuals with special powers living regular lives. Perhaps one of the best films to expound on this was M.Night Shyamalan’s “Unbreakable”, a story of two individuals coming to terms with who and what they are, as well as their place in the world relative to each other.

Kim Min-suk’s feature debut owes more to Shyamalan’s “Unbreakable” than it does to the superhero Marvel or DC Comics blockbusters. It grounds its two characters- one the hero, and the other the villain- in commonplace circumstances, and thereby injecting a healthy dose of realism into the movie. On one end is Kyu Nam (Ko Soo), a former scrapyard worker turned pawnshop manager; and on the other, Cho (Kang Dong Won), a disturbed young man with a troubled childhood and innate mind control abilities.

The alternative English title for this movie is “Psychic” and it is Cho that this title is referring to. In the film’s opening scene, a young Cho is seen blindfolded while his father berates his mother for letting their child live- until the blindfold slips and his father kills himself by snapping his own neck backwards. His mother tries to kill him upon witnessing his terrifying powers, but fails. Twenty years later, Cho gets by through robbing pawnshops while making everyone else around ‘freeze’ as if time had stopped.

Kyu Nam however turns out to be immune to Cho’s psychic abilities, and when he tries to stop Cho from robbing his boss’ pawnshop, Cho responds by killing his boss in a particularly gruesome manner. Just like that, Min-suk sets up the feud between Kyu Nam and Cho at the centre of the movie. It is their conflict that drives the rest of the narrative, as both of them are pushed to understand their place opposite each other.

Through Kyu Nam, Cho discovers a newfound fallibility to his apparent invincibility; while through Cho, Kyu Nam discovers a greater sense of purpose as the counterbalance to Cho’s heinous ways. The showdowns between the two are inevitable, and Min-suk stages a few thrilling exchanges- in particular, one of them that takes place in a crowded subway station is especially gripping to watch.

Cho’s blatant disregard for human life however may be disturbing to some, especially since some of his victims tend to meet their deadly fates a little too casually for comfort. The only levity the film provides is in the form of Kyu Nam’s buddies- one from Ghana, and the other from Turkey, both of whom can speak perfect Korean. Their banter with the simple Kyu Nam provides some much-needed comic relief in a movie that can turn deadly serious very quickly.

Both Ko Soo and Kang Dong Won turn in compelling performances, even though one may naturally prefer Ko Soo’s more empathetic one. He makes his character’s apprehension felt keenly, especially when Min-suk clearly sets him up as being mismatched against Cho’s superpowers. On the other hand, Dong Won cuts a chilling presence as the villain, giving his character an intensity that you can’t quite help but be enraptured by.

Those expecting some form of answers as to the origin of Cho’s abilities, or Kyu Nam’s, should however be prepared to be disappointed. Min-suk offers none, preferring that his audience accept it as part of the nature of mankind and the inherent differences between individuals. This is only Min-suk’s second movie, the first as a co-writer on Kim Jee-woon’s kimchi western, The Good the Bad the Weird, and it proves his strengths as a helmer. Gripping and never for one second less than interesting, “Haunters” is one unique Korean movie you shouldn’t miss.

(A different kind of superhero movie- but a riveting watch nonetheless) 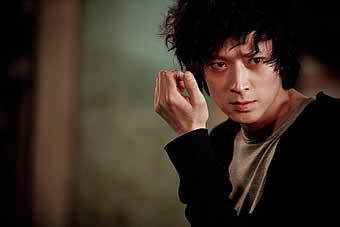 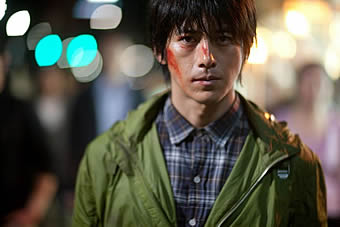