Synopsis: Following her aunt's death, Colleen and her daughters inherit her house. However, during their first night in their new home, murderers enter the home, putting Colleen in a situation where she must fight to save her daughters' lives. When the girls suffer a terrible trauma during the night, their disparate personalities diverge even further. The eldest daughter, Beth, is said to become a famous horror author with a perfect family and life in Los Angeles, while her sister, Vera, can't cope, and loses her mind faced to an unshakeable sense of paranoia. Sixteen years later the daughters and mother reunite at the house where Colleen and Vera continue to reside. It is then that strange events begin to take place.

There are some horror films that just make you feel sick and even the thought of reminiscing the scenes just makes you very uncomfortable. Ghostland is one of them.

The film features a family inheriting an abandoned house full of dolls from one of their late relatives, only to be attacked by murderers (who are then revealed slightly later in the plot as psychopaths) and create havoc in the household. That is, despite clear warning signs hinted throughout.

That happened 20 minutes into the film and although that was a clear indication that the film might end up being less satisfying than it should be, it was still slightly too early to judge and I proceeded to comprehend the madness further.

Like many horror films, the use of ‘jump scares’, accompanied by shocking music and disturbing scenes is frequent, although not excessive enough to put one off. Viewers would however be terrified (and put off) by the psychopaths’ strange obsessive fetish, consisting of a deranged ogre and a lady who looked like she just came out from some metal band. Viewers will definitely suffer through grotesque scenes of women (read: private parts) and doll obsession and mutation.

Although quite predictable for any horror films, the setting is appropriate and somehow creates intensity and fear in the viewer. A pleasant cast helped to accentuate the genre, although not entirely outstanding.

While the film’s intention of a psycho-thriller slight twist is credible, the multiple disconnected fast paced scenes create too much confusion, leaving viewers baffled and disorientated. It does not take long for one to just give up and watch it as it is.

At most times, the plot feels very aimless, with some parts leaving the viewer very clueless. If logic is to be applied here, it may be recommended not to, as eventually you may not even see the light. Personally, it was only until the end of the film that I actually comprehended the actual story. And that I realised how silly the story was to begin with.

Overall, Ghostland is disturbing and quite thrilling but clueless and unfocussed direction amidst a messy and fragmented plot places the film in a much lower rating.

(A strange horror film that got lost in the wilderness. Not for the faint-hearted and those afraid of dolls) 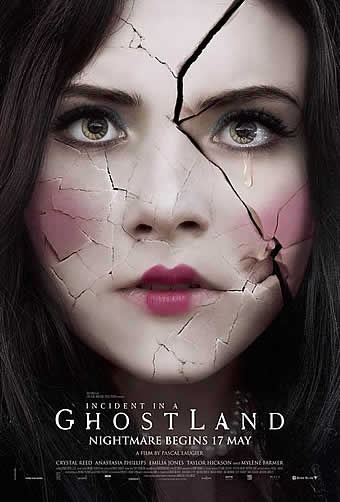