Synopsis: Struggling to come to terms with the death of her mother, Kim suddenly has to deal with a new mother in her life. Choon, Kim’s father, brings home a woman one day and announces his decision to marry her. A series of mysterious and terrifying incidents start to occur at the family home after their return. Could it be the jealous spirit of Choon’s dead wife that has come back to show her displeasure at being replaced? Or is there something more sinister? What unravels is a tale of unspeakable evil that threatens to destroy the family. What deep, dark secret is Na, Choon’s new wife, hiding from them? Can Kim help save her family from complete destruction?

The less you know about ‘Ghost Child’ the better, for the highlight of the film is indeed the twist in its final act, which provides a riveting conclusion to the supernatural occurrences taking place around a teenage girl Kim (Jayley Woo), her father (Chen Hanwei) and her grandmother (Cecilia Heng). Otherwise, “23:59” director Gilbert Chan's sophomore horror outing offers up nothing new for the seasoned horror viewer, even though it does boast of some gripping sequences.

Co-writing the movie with Tan Fong Cheng, a veteran producer of Eric Khoo’s films, Chan spins a familiar horror tale of a single-parent family that is threatened by some unseen spirit with the arrival of a stepmother. That person in this case is Na (Carmen Soo), an Indonesian Chinese whom Kim’s father brings to Singapore after rescuing her from some ruffians during a business trip in Indonesia. The very night she arrives, a strong gust of wind blows an old family photo to the floor, leaving a single wide crack right in between Kim’s father and deceased mother. Kim immediately reads it as an omen, i.e. that her mother’s spirit has returned less than pleased with a new woman in the house.

But of course, if you have seen enough horror movies, you’ll guess that the answer isn’t as simple – for one, this is a movie titled ‘Ghost Child’ and not ‘Ghost Mother’; and for two, because every spooky encounter that takes place hints at a malevolent child spirit rather than a vengeful adult one. To both scriptwriters’ credit, the ambiguous nature of the spirit lurking around the family adds a layer of suspense – on one hand, said ghost seems to be exacting its dislike on Kim and her grandmother; on the other, it also seems to be helping Kim along, assisting her in her examinations in school and punishing a fellow student cum swimming teammate Tiffany (Vanessa Lee) who has been bullying her.

That dual nature gives Chan plenty of opportunities to engineer some spine-tingling moments in the movie, which not only surpass what he did in “23:59” but are by far the best we have seen in any local horror movie. Though most of it does come from the same bag of tricks that horror filmmakers are prone to reach into, Chan effectively contextualises them for a local setting – whether the scratching noises behind a cupboard, or the eerie baby doll with an unnerving high-pitched laugh, or the ‘Paranormal Activity-like’ human tossings – to craft some genuinely suspense-filled sequences. In particular, the climax is especially nail-biting, as father, daughter and grandmother are confronted head-on with the full wrath of the poltergeist.

While Chan gets the otherworldly element mostly right, both him and Tan unfortunately neglect the human aspect of the story. The bond between Kim and her father is hardly developed – especially since we are told at the start that things between them have been strained following her mother’s passing and his physical absence owing to work. Ditto for that between Kim and Na, the expected tensions between daughter and stepmother hardly given much play. Instead, what passes for character development here is some lame conflict between Kim and Tiffany and her gang of friends that plays out as name-calling, some juvenile pranks, and an equally childish dare which lands Tiffany in hospital. Even the relationship between Kim and her mother is given too fleeting a mention, and because of that, we never quite know at all whether she is glad or distressed that her mother’s spirit may have returned.

Forgoing a more character-driven approach to the storytelling that many solid horror movies today adopt has certain repurcussions on the actors. Veteran MediaCorp actor Chen Hanwei’s big-screen debut is really nothing to shout about, having participated in much more intricate and interesting roles on the goggle box. Malaysian actor and model Carmen Soo gives a one-note performance looking helpless most of the time as Na, while newcomer Jayley Woo is credible, without however leaving much of a lasting impression, as the confused and conflicted single-parent teenager who is neither happy at home or in school.

Without characters with whom we can identify with, ‘Ghost Child’ remains at best a mediocre horror with some edge-of-your-seat moments and an interesting final twist. Produced under the banner of Eric Khoo and Mike Wiluan’s genre outfit Gorylah Pictures, you can see the similarities it shares with the company’s maiden film ‘Darah’ in its use of Southeast Asian folklore – ‘toyol’ anyone? Yet without a strong emotional core at the heart of its key human characters, it is only as engaging as its scares, which are good enough if you need a jolt to your heart but nothing more. 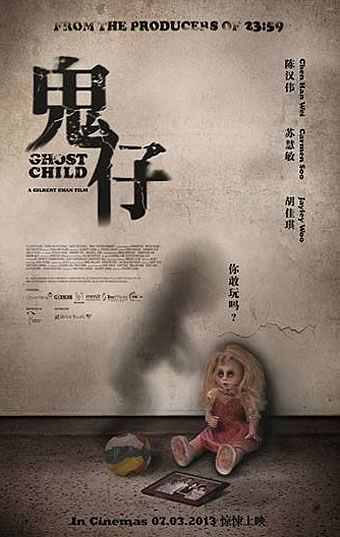