Synopsis: FALL IN LOVE AT FIRST KISS is a Taiwanese movie adaptation of the popular Japanese manga series “Itazura na Kiss” written by Kaoru Tada. Jiang Zhishu is a smart boy, while Yuan Xiangqin is a ditzy girl who does not excel in her studies. On the first day of a new semester, Xiangqin comes across Zhishu, the handsome boy loved by thousands of girls. Starting from an unexpected kiss, Xiangqin has her unrequited love.

Instead of coming out with another original romance comedy after the mega-success of Our Times, director Frankie Chen Yu-shan and screenwriter Sabrina Tseng decides to adapt the decades-old Japanese manga, “Itazurana Kiss” to the big screen for their second onscreen collaboration. In a way, triggering the nostalgia factor especially those who loved the 2005 Taiwanese idol TV drama series, “It Started With A Kiss” or more popular known as “恶作剧之吻”.

In this updated 2019 movie version, the rugged looking, bad boy Darren Wang (Our Times, A Better Tomorrow 2018) plays Jiang Zhishu, in the role originally played by Joe Cheng. The story revolves around Zhishu, the smartest (with an IQ of 200), coolest, most charming and wanted hunk in the entire school and his romance with the bumbling, happy-go-lucky, slightly naïve, F-class Xiangqing (Jelly Lin who is best remembered as the bumbling mermaid assassin from Stephen Chow’s Mermaid).

While Zhishu might be the most popular personality in school, he is actually stressed out by the fact he is being groomed to take over his dad’s company once he graduates. In the meantime, Xiangqing finally pluck up the courage to profess her love for Zhishu only to be rejected outright. But when an earthquake rendered Xiangqing and her father without a shelter, Zhishu’s dad (our very own Christopher Lee in a small role) who happened to be old friends with Xiangqing’s dad offered his home to the poor father-and-daughter. Talking about the mother of all coincidences. Thus, with the kind offer creating the chance for Zhishu to know Xiangqing better, will our two love birds unite and live happily ever after?

In an ironic twist, Darren Wang plays hard to get in Fall In Love At First Kiss while he tries hard to win the one he loves in Our Times.In the former, Jelly Lin’s character being the less capable half spent the entire movie waiting for Zhishu to declare his love for her and we are left guessing whether the perpetual mean and cocky Zhishu has secretly fallen in love with this innocent girl or have in fact gotten together with Shahui (Cecilia Choi), his equally intellectual classmate.

The mostly China-backed flick continues in the tradition of Taiwanese romance comedies resorting to slapstick antics and exaggerated acting to keep things moving at a swift pace though it still feels 20 minutes too long. Speaking of exaggerating, the sultry and sexy Christy Chung gamely appeared as Zhishu’s over-enthusiastic mom. The majority of the jokes came from the rivalry between Xiangqing’s gang and Zhishu’s “fan club”, a sport meet in the halfway mark turned out to be rather uneventful except sealing Zhishu’s second kiss with Xiangqing and a short stay in a rundown countryside hotel later on contains the funniest gag of all.

Somehow, Frankie Chen’s years of doing idol drama continues to haunt her as the transition from scene to scene still left a lot to be desired. Fortunately, Jelly Lin is so good being the goofy lead that you probably won’t notice the flaws or remembering Taiwanese actress Ariel Lin was actually the original Xiangqing. Yet the repetitive hammering of the message of getting a better half who love you more than anyone else can be tiresome after a while.

Without throwing further shade at Fall In Love At First Kiss or risking embroiling in some #metoo movement controversy, let’s just conclude by saying it’s a movie tailored for certain demographics. You know who you are. For those who is going to detest it. Likewise, you know who you are.

(Though Fall In Love At First Kiss is the weakest among Our Times, Café Waiting Love and You Are The Apple My Eye, it remains a light-hearted amusing affair for a Valentine’s Day outing) 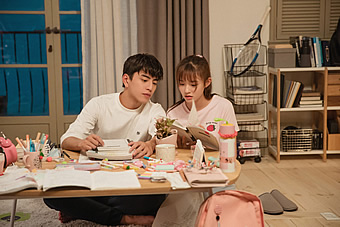 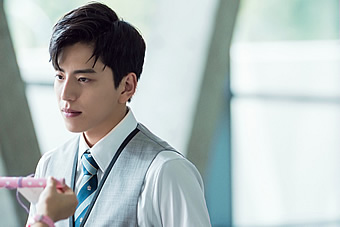 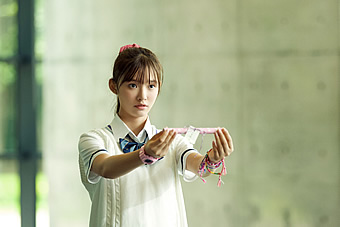