Synopsis: ELVIS is an epic, big-screen spectacle from Warner Bros. Pictures and visionary, Oscar-nominated filmmaker Baz Luhrmann that explores the life and music of Elvis Presley, starring Austin Butler and Oscar winner Tom Hanks. A thoroughly cinematic drama, Elvis’s (Butler) story is seen through the prism of his complicated relationship with his enigmatic manager, Colonel Tom Parker (Hanks). As told by Parker, the film delves into the complex dynamic between the two spanning over 20 years, from Presley’s rise to fame to his unprecedented stardom, against the backdrop of the evolving cultural landscape and loss of innocence in America. Central to that journey is one of the significant and influential people in Elvis’s life, Priscilla Presley (Olivia DeJonge).

When it comes to biopics, authenticity appears to be the yardstick most would measure it by. For flamboyant filmmaker Baz Luhrmann, that would be both stifling and obvious.

It’s been almost a decade since his last feature (The Great Gatsby, 2013) and two for Moulin Rouge! (2001), but the Australian director commits to his inimitable visual theatrics with his latest feature, Elvis. Is this a rich documentary with nuance? Not exactly. Instead, Luhrmann shakes down the short two decades of the singer’s fiery stardom into a creature that he’s more familiar with - a feverish story revving with soulful tracks to pay tribute to Elvis’s influences, and then his rediscovery in his later years - all dripping with signature baroque and burlesque from Luhrmann and his crew.

So yes, this may not be everyone’s cup of tea. From swooping cinematography and jangling tracks piling over each other, to graphic novel panels and frenzied edits, Elvis is an emotional dervish - a project that needs the audience to release their reins and expectations of the traditional narrative. Elvis, in short, needs to be felt.

This unorthodox treatment shows up wonderfully in some areas: Luhrmann’s lush cinematography comes through with the help of Mandy Walker, who also worked with him in another feature, Australia. From sweaty foreheads displaying grit and passion in the early blues and gospel singers, to the psychedelic dream of a fairground representing Colonel Tom Parker (Tom Hanks) eternal spiel, the visuals here are decadent and uninhibited - visceral in every hue and texture. And in between, all manners of creative edits to put the director forth as a master of transitions.

This is joined by an intense soundtrack, unrelenting in its lure. Much like how Moulin Rouge! found footing in its mix of modern and classic tunes, Luhrmann shows off his finesse once again with Elvis - smuggling in contemporaries like Eminem, Ceelo Green, Denzel Curry and even Doja Cat to deliver portions of Presley’s classics. But it is the heavy tribute to his early musical influences - such as Arthur Crudup’s “That’s All Right” (performed by Gary Clark Jr.) - so full of raw power and expression depicting the era’s struggle for coloured people, that really places the movie’s score as a stellar (if trippy) blend.

For much of Presley’s renditions, Austin Butler, who plays the title character, is near flawless in his numbers. Taking on the daunting task of playing a legend is always risky, as one submits to the scrutiny of fans and purists. But the actor has captured isms effectively, and transformed them enough to his own to make them feel natural and not mere affectations.

But the film does have its letdowns. Elvis and his relationship with his family (especially that of his two important figures - his mother and wife) is rather diluted, thus taking away the poignancy of certain milestone events. The other - and I’m sad to say - is Hank’s portrayal of the manager and mentor of Presley. Wrapped up in stiff prosthetics, the Colonel’s greasy impresario has little charm like that of Jim Broadbent’s Harold Zidler in Rouge. And because the entire film’s angle is meant to serve empathy to Parker’s broad reputation as a swindler, the complete narrative ends up as one that is a little confusing, and mostly unsatisfying.

That said, Luhrmann’s untouchable when it comes to delivering entertainment, of which Elvis remains a healthy piece. The pageantry of its production aligns with Elvis’s whirlwind rise and iconic status, and the soundtrack resonates deeply with tribute. Very much something that taps into movie magic.

(So much splendour and filmic finesse, so much so that weaker portions are washed over for the entire’s entertainment value) 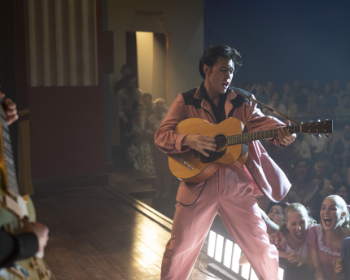