Synopsis: The story takes place during summer vacation where 30 high school students are taking special classes. Locked in the building, one by one, the students face horrible deaths and the only clue is a strange puzzle that has to be solved. They are forced to use whatever means necessary to survive the long night…

The first “Death Bell” was a sleeper hit in the summer of 2008, so it is no surprise that the producers would attempt a sequel to cash in on the popularity of the first movie. But even the most die-hard fans of the low-budget original would probably be disappointed by this classic case of ‘sequelitis’, as “Death Bell 2” essentially rehashes the same premise with a different group of actors and substitutes gore for any kind of genuine horror.

Just as its predecessor, this is about a bunch of elite high-school students who discover themselves the targets of a mysterious slasher while back in school during the holidays cramming for their college entrance exams. Of course, given the demise of most of the characters from the first movie, there is no relation- cast or character-wise- between the two films.

Not that it matters really- director Yoo Sun Dong wastes little time in setting up the events leading up to that fateful night over which the subsequent killings unfold, including a prelude which tells of the death of the school’s champion swimmer Tae-yeon (Yoon Seung Ah) whose vengeful spirit is but one of the red herrings the movie uses later on to distract you from the identity of the killer.

Indeed, when Tae-yeon turns out to be one of the most fleshed-out characters in the movie, you can guess how little time, effort or interest Yoo has in letting his audience get to know the other hapless teens. This only means that one probably feels little for any of the characters as they meet their demise, but again the purported highlight of the movie- as was the original- is its numerous gory killings.

Yet aside from one that takes place along the school corridor with the killer riding a motorbike with metal spokes on its wheels, the death traps lack the ingenuity that gore-hounds would have already seen in “Saw”. Yoo also exhibits none of the dexterity in pacing and editing that his predecessor’s director Chang had, and these scenes of carnage hardly excite or thrill. And no, dumping copious amounts of blood onscreen isn’t going to satisfy audiences already de-sensitised from the “Saws” and “Hostels” of Hollywood.

What ultimately saves the movie is its intriguing whodunit which throws suspicion on the culpability of some of Tae-yeon’s fellow students in her death. The trio of screenwriters (Lee Gong-Joo, Lee Jeong-Hwa and Park Hye-Min) spend considerably more time and thought on this in the second half of the movie, and their attempt to find motive and motivation behind these killings turns out more compelling than one would expect. Ditto for the surprisingly heartfelt ending, which reaffirms that the dead don’t always return just for vengeance.

Still, if the final reveal lacks surprise, it is no thanks to Yoo’s directorial ineptness, clearly evident right from the start by his inability to build any sort of suspense in the story or engineer some clever inventive kills to hold his audience’s attention. Never mind that “Death Bell 2” recycles its material from the original, what’s most inexcusable is how it manages to do so even worse than its predecessor did.

(Plenty of gore but little else by way of thrills or suspense, this sequel is no more than an inferior copy of its predecessor) 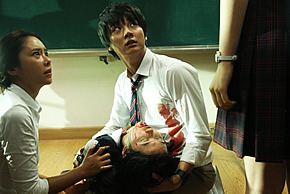 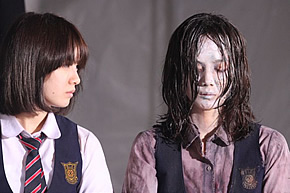 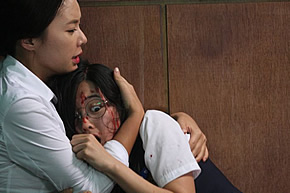