Synopsis: 1873. Arizona Territory. A stranger (Craig) with no memory of his past stumbles into the hard desert town of Absolution. The only hint to his history is a mysterious shackle that encircles one wrist. What he discovers is that the people of Absolution don't welcome strangers, and nobody makes a move on its streets unless ordered to do so by the iron-fisted Colonel Dolarhyde (Ford). It's a town that lives in fear. But Absolution is about to experience fear it can scarcely comprehend as the desolate city is attacked by marauders from the sky. Screaming down with breathtaking velocity and blinding lights to abduct the helpless one by one, these monsters challenge everything the residents have ever known. Now, the stranger they rejected is their only hope for salvation. As this gunslinger slowly starts to remember who he is and where he's been, he realizes he holds a secret that could give the town a fighting chance against the alien force. With the help of the elusive traveler Ella (Olivia Wilde), he pulls together a posse comprised of former opponents—townsfolk, Dolarhyde and his boys, outlaws and Apache warriors—all in danger of annihilation. United against a common enemy, they will prepare for an epic showdown for survival.
Movie Review:

First and for most, let me just briefly indulge my fan boy glee of how cool the concept is when it first dawn upon my nerd-ism seeing this masterpiece on the wooden shelf of the comic section at a local bookstore. The wild wild west, gun slinging, dust settling, weed rolling, desert thralling and cactus thriving set piece that sets against, insect aliens from outer space who abduct humans to study our weaknesses in order to steal gold from us. Mind blown. Two totally different genre, blending into one massive blockbuster never seen before! Why haven’t anybody done that sooner? How about comedy and horror? Oh, that’s done. Drama and sci-fi? Done. Animation and drama? Done. Holy crap, this maybe the last cross genre film to cross our silver screen (i have this nagging feeling i missed something. Lets see who can prove me wrong eh?)!

So here’s what you miss, James Bond here wakes up in the middle of the hot desert not knowing his past and realises that there is thingamajig that is braced to his arm. Stumbles upon a rundown town and was captured by the sheriff. Also captured was Indiana Jones son who was drunk and also kind of like  a tool. Night came upon thier departure to the main city to be bought to justice, the aliens arrived. Chaos ensures, Bond's alien-ware comes alive and manages to shoot down one of the crafts but alas among the battle, most of the town members were unfortunately captured by the outer visitors. Awesome plot isn’t it. But somehow, we have a case of overvalue concept and undervalue storyline. A never heard before cross genre but somehow, it all played too familiar which totally undertones its grandeur without giving it a second look. Don’t get me wrong, as a blockbuster summer film, its fit very well into the mold. It started out a pretty great western and Craig very much fit into the role of a cold blooded shooter/killer with a soft heart (but the amazing blue eyes and *ahem physic is rather distracting). Even without the sci-fi introduced, i was rather intrigued and even nearly forgot that this film had bloody aliens in it! Then the zap, boom and bang started and everything died down alittle and soon the western-style essence soon went under-par , barely breathing above water.

But don’t get me wrong, the sci-fi, although has been a recycle bit of any or some sci-fi film you’ve seen around, the execution was a digestible fill to anyone who is hungry for some space dish. Kudos to the person to come up with the concept of how the aliens wrangle up humans for study and destroy. It ties really nicely to the whole western concept. Pun intended. Special effects were top notch helming the director who brought you Ironman, enough said. Although, i must say, some of the sub-storyline were alittle too mushy and only served its purpose to bring that extra emotion to be yanked out, balancing the violence surrounding it. Plus, the violence around wasn’t as half bad as it mostly happens off screen or too fast to see what really happens and if blood were to be presence, dark red was its choice of colour, lowering down its rating.

For a summer block buster, the cast list of indie A-Lister and blockbuster superstars and abound. you’ve got Daniel Craig, Harrison Ford, Olivia Wilde, Sam Rockwell, Paul Dano, Adam Beach and the list goes on. That is why, it’s rather a shame that this film was meant to be an explosive blockbuster genre for which with these cast list, we could have had an indie-western-sci-fi-drama (with a bit of dark comedy?) in our hands. Oh hey Hollywood! There’s your new cross genre film to ponder upon!

(Saddle up your horses partner, we gonna have a blast!) 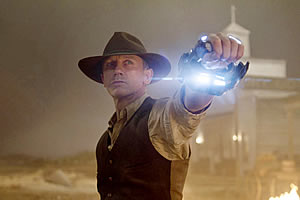 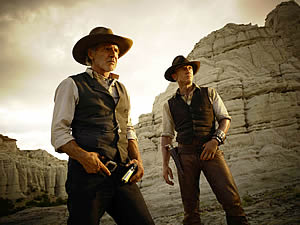 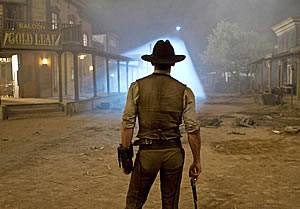 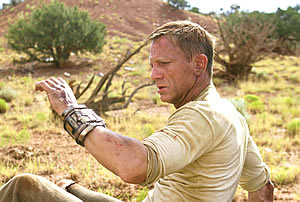 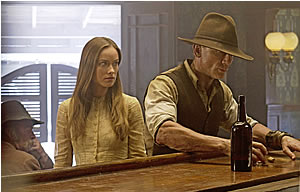 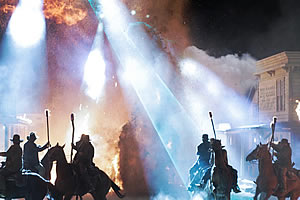