Synopsis: After a meteorite lands in the front yard of their farm, Nathan Gardner (Nicolas Cage) and his family find themselves battling a mutant extraterrestrial organism as it infects their minds and bodies, transforming their quiet rural life into a living nightmare.

If you’ve heard of H.P. Lovecraft, you’ll most certainly have heard of his 1927 short story of the same name. Probably one of his most popular works, the story told of a fictional town called Arkham where a meteorite had crashed on an unfortunate farm, poisoning its vegetation, livestock, and eventually its human inhabitants. As ripe as that sounds for a science-fiction horror, there is good reason why few have attempted to adapt it for the big-screen – not only is his writing abstract (he describes the color as “hectic and prismatic variants of some diseased, underlying primary tone without a place among the known tints of earth”), the oddness of his stories was always going to be less intriguing than baffling.

That writer-director Richard Stanley has managed to turn Lovecraft’s source material into a fascinating mix of wacky and weird is therefore even more admirable, assisted in no small measure by a thrillingly gonzo performance by Nicolas Cage. In case you’re wondering, Stanley was the director of the infamous 1996 H.G. Wells adaptation ‘The Island of Dr Moreau’ before he was unceremoniously fired, and has spent the years since largely focused on short films and documentaries. The time in between though has not dulled his sensibilities; in fact, you can sense how Stanley relishes the opportunity to unleash all that pent-up nuttiness.

Staying true to his source material, Stanley tells the story from a first-person perspective through a surveyor sent to a remote corner of New England. The hydrologist Ward (Elliot Knight) encounters the teenager Lavinia (Madeline Arthur) performing Wiccan rituals in the woods, and meets the rest of her family – including her dad Nathan (Cage), her mom Theresa (Joely Richardson), her older brother Benny (Brendan Meyer), and her younger brother Jack (Julian Hillard). Nathan has moved the whole family out to the family estate where he grew up to get away from the city, but whereas Theresa resents the spotty Wi-Fi service, Benny gets by through getting high, and Jack has retreated into himself.

The sudden appearance of a glowing magenta meteorite changes the Gardners’ entire living environment. Strange flowers bloom in the yard. The tomatoes and peaches in the garden grow faster than usual, but end up tasting bitter and rotten. There is a funny taste to the water from the well, which itself begins emitting hues of purple light both by day and by night. These seemingly inexplicable events slowly but surely take their toll on the family. Jack begins talking to someone from the well; Lavinia starts to cut herself; Benny becomes even more spaced out; and last but not least, Nathan lets go of the frustration bubbling within him that he had tried to keep at bay with the move away from the city.

Yet the terror isn’t just psychological; oh no, there is plenty of old-school creature horror too, including the family dog turning into a mutant monster, the barnyard alpacas morphing into a bloody mangled mess, and Theresa fusing with Jack into a single mutated organism. Stanley must no doubt have been inspired by such classics as John Carpenter’s ‘The Thing’, and the use of practical effects (than digital imagery) makes the displays of grotesqueness a delightful B-movie throwback. Even as Stanley is guilty of overloading his film with different forms of creepiness not necessarily coherent with one another, those willing to go along with the bonkers will enjoy how gloriously unhinged the proceedings unfold.

There is also sheer joy watching Cage go more and more uncaged. Watching Cage lose his shit is great fun, especially in how expertly he mixes horror and humour to something approaching genius. Those who have followed the former action movie star’s career evolution will recognise how he has honed his nutzoid turns in ‘Mandy’ and ‘Mom and Dad’ into a patent, and there are plenty of choice moments to savour here, including those in which he waxes lyrical about raising alpacas (“If you don’t mind, it’s time to milk the alpacas”) and then lets his anger take over the trigger when he finds that they have turned alien.

It’s not easy to turn a Lovecraft story into something for the big screen, but Stanley largely succeeds in crafting a delightfully weird science-fiction horror hybrid with the ‘Color Out of Space’. There is no point bringing logic into the cinema for this one, at least not if you’re prepared to go along with its sheer eccentricity. But if you’re willing to embrace the weirdness, you’ll find yourselves amidst one of the most authentically Lovecraftian horrors ever, with a brilliant Cage very much in his element. It is a wild experience all right, and even if it isn’t out of this world, will surely transport you into its own phantasmagorical universe with an allure you’ll find difficult to resist.

(Weird, wacky and wild, this adaptation of H.P. Lovecraft's classic short story is a phantasmagorical ride of eccentric pleasures, including one called Nicolas Cage) 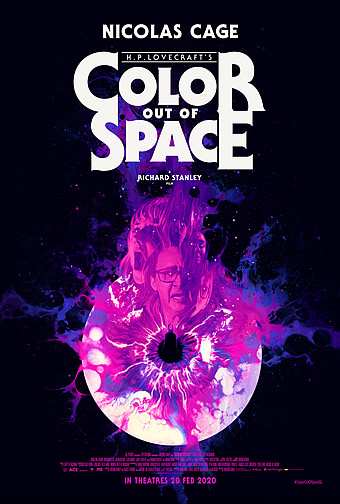 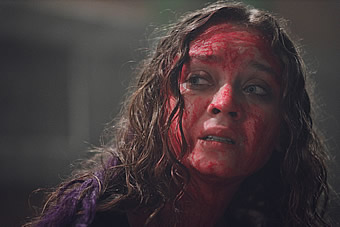