Synopsis: The story follows a one-time bullied geek who grew up to be a lethal CIA agent (Johnson), coming home for his high-school reunion. Claiming to be on a top-secret case, he enlists the help of the former "big man on campus"(Hart), now an accountant who misses his glory days. But before the staid numbers-cruncher realizes what he's getting into, it's too late to get out, as his increasingly unpredictable new friend drags him through a world of shoot-outs, double-crosses and espionage that could get them both killed in more ways than he can count.

As convenient as it may be to pigeonhole ‘Central Intelligence’ into the label of a buddy cop movie, the always-amusing, often-hilarious and surprisingly-affecting action comedy really is much more. For starters, Kevin Hart’s Calvin Joyner isn’t a cop at all; in fact, he’s a put-upon mild-mannered accountant who is disillusioned with his job and where he is at in life, despite being married to his high-school sweetheart (Danielle Nicolet). For another, Calvin and Dwayne Johnson’s Bob Stone can’t quite be called buddies, especially since they have been out of touch with each other for the past twenty years and are only reconnecting upon Bob’s initiation on the eve of their high school homecoming reunion party.

Oh yes, the catch here is that while Calvin used to be the high-school superstar who excelled at everything from athletics to academics to drama and was thus dubbed ‘The Golden Jet’, Bob – who used to go by the name Robbie Weirdicht – was the overweight kid who had to contend with being dragged out of the locker-room shower by a bunch of sneering bullies and thrown naked in the middle of a school assembly. And yet, in his moment of humiliation, Calvin’s act of kindness in offering his ‘Golden Jet’ jacket to cover Bob’s privates has made him Bob’s hero, so much so that Bob worships Calvin as no less than his idol. But it isn’t just for old times’ sake that Bob is now reaching out to Calvin – indeed, after watching ‘Fat Robbie’-turned-He-Man take out four bullies in front of his eyes, Calvin agrees to Bob’s seemingly innocuous favour of accounting help with his overseas payroll.

And so begins a series of CIA hijinks, as Bob reveals himself to be a CIA agent after someone known as the ‘Black Badger’ who has stolen the US satellite encryption keys and intends to sell them to the highest bidder. Though Calvin wants no part in the high-stakes operation, he finds that he is already unwittingly involved when Bob’s superior Pamela (Amy Ryan) turns up at his doorstep and informs him that Bob is a rogue agent who happens to be the very Badger himself. Oh, there’s also the question of whether Bob’s former partner (Aaron Paul in an extended cameo) was killed by the Badger as Bob claims or was in fact killed by Bob himself as Pamela claims. As earnest as Bob may appear, Calvin’s struggle as he grazes past one life-threatening setpiece after another is whether to trust Bob in the first place.

From an extended shootout at Calvin’s office that ends with Bob and Calvin crashing through the eleventh-storey window onto a giant gorilla inflatable below, to a CIA safe house where Calvin springs Bob from custody, to an underground parking garage where Bob comes face to face with his nemesis, director Rawson Marshall Thurber stages the action with surprising élan, emphasizing Johnson’s swift and lethal moves as well as Hart’s barely controlled hysteria at every turn. Yet because Johnson and Hart have performed similar shtick in previous roles, the real fun is in watching the two actors play against each other in quieter and more intimate scenes, such as a couples’ therapy session between Calvin and his wife which Bob crashes by pretending to be their therapist.

It is in scenes such as this that the sheer chemistry between Johnson and Hart shines through. Thurber, who co-wrote the script with Ike Barinholtz and David Stassen, plays against his audience’s expectation by letting the usually motor-mouthed Hart play the straight man and Johnson be the unhinged man-child responsible for the verbal and physical shenanigans. Thanks to Johnson and Hart’s elevated performances, the ‘role reversal’ works beautifully and makes for reason alone to watch this instead of say the next ‘Ride Along’ sequel. The stronger than usual character work is yet further proof that this film is a notch above many others of its ilk, demonstrated in the insecurities that Bob and Calvin each have to deal with individually along the way.

Even though the opening scene of Bob’s teenage appearance in the form of Johnson’s face fattened by CG trickery suggests that it may end up pandering to the lowest-denominator, ‘Central Intelligence’ ultimately proves unexpectedly sensitive to the plight of those bullied in high school in its concluding scene, where Bob finally overcomes his personal demons to take the stage in front of his schoolmates twenty years after being painfully humiliated. Besides a cameo by Melissa McCarthy as Bob’s high-school crush, it is as sweet a parting shot as any, underscoring yet again what an earnestly endearing and humorous joyride this odd-couple buddy movie has been. Most of all, Johnson and Hart are like ‘yin’ and ‘yang’, and together they prove that a little Hart and a big Johnson goes a long, long way.

(You won't find a more dynamic pair than Dwayne Johnson and Kevin Hart this summer, and this always-amusing, often-hilarious and surprisingly-affecting buddy action comedy genuinely pops with their chemistry) 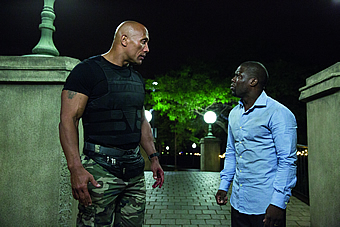