Synopsis: Friends An Ran and Zhao Yongyuan are separated as children and meet again years later in Beijing in the early 1990s, when An is a university student and Zhao is a hawker. They rediscover their children friendship and Zhao helps An raise funds to study abroad. The two fell in love, but try to conceal it, in view of An’s pending departure to further her studies. As An prepares for her trip, Zhao can’t hold back his feelings and profess his love and desire to take care of her for the rest of her life. Though touched by Zhao’s sincerity, An eventually leaves for America after a cruel twist of events. Things haven’t been smooth for An and in 2001, she runs into Zhao, who is now a successful businessman in New York. While An has given up on their past, Zhao’s persistence and sincerity moves her. They decide to get married, but another turn of event results in their being separated once more…

Anyone who’s been in a relationship will tell you that sincerity is one of the most important ingredients, and so it is with the best romances that we read on the page or watch on the screen – which is the reason why ‘But Always’ isn’t a true romance. It operates under a veneer of sincerity, leading you into thinking that it is some portrait of undying love, when in fact it is quite the opposite, leaving you feeling used, cheated, and ultimately frustrated.

A tale of two childhood sweethearts that spans Beijing and New York, it plots the ups and downs of Zhao Yongyuan (his last name meant to rhyme with ‘forever’ in Chinese) and An Ran’s love for each other against the vicissitudes of life. The tale begins in 1976 against the backdrop of the Tangshan earthquake, where An Ran loses her mother to the tragedy and is subsequently raised by her father. On the other hand, Zhao loses both his parents, and is tended by his grandmother who struggles to make ends meet in order to provide for her grandchild. Because of his family’s poverty, Yongyuan is often the scruffiest kid in school, who is also therefore ostracised by his classmates.

But An Ran strikes up an unlikely friendship with Yongyuan after an unexpected act of kindness on her part, so much so that they end up taking the same bus to school every day and hanging out together after as well. The sudden death of Yongyuan’s grandmother is the first turning point of their relationship, when his uncle (Lam Suet) takes him away without giving him the opportunity to say goodbye to An Ran. As far as such childhood romances go, it is as sweet and innocent as it gets, though the brevity of it doesn’t quite explain why the pair will be as emotionally tied.

The next act unfolds 18 years later when Yongyuan follows his uncle back to Beijing to help out in the latter’s street stall, the former now played by Nicholas Tse. It is one propitious day that he chances upon An Ran, who is now a medical student looking forward to a university education in America. Although neither Gao Yuanyuan (who plays An Ran) or Tse look anything like their younger selves, they immediately recognise each other, and realise that each is still very much fond of the other. For sheer narrative necessity, Yongyuan runs afoul of the law while trying to protect An Ran from a spot of trouble, and the next turning point comes when the former is sent to jail while the latter goes forth to pursue her dream of a brighter future in New York.

Fast forward a couple of years more and we catch up with both of them in the Big Apple; but whereas An Ran is now working as a tour guide, Yongyuan is a successful businessman on Wall Street whose masterful grasp of English proves that you can do a lot with your time in prison. Though the hand of fate has turned, Yongyuan is still very much in love with An Ran, and despite knowing that she is already attached to a painter (Qin Hao), wants to let her know that his feelings for her have never diminished through the years. On the other hand, An Ran is less sure, and only sparks to Yongyuan’s advances after being convinced of his sincerity - alas, a happily ever after isn’t on the minds of co-writer and director Snow Zou.

In a most cliched turn of events, An Ran’s on- and off-boyfriend is left paralysed from the waist down after a car accident, and because he had just visited her prior to it, she feels responsible for his condition and chooses to stay by his side to take care of him. But just as you think Zou might be ending things on a bittersweet note, he goes on to deliver yet another stunner straight out of a certain Robert Pattinson movie called ‘Remember Me’. Yes, it’s no coincidence that our couple find themselves in New York in the year 2001, but instead of being poignant, that supposed twist is so shamelessly manipulative that it may leave you infuriated.

It comes off even worse when you consider the coda at the end, which sees An Ran returning to Beijing in 2014 on board a bus which announces how many Chinese like her are doing likewise to take advantage of the opportunities in their own hinterland. Admittedly, Peter Chan’s most recent ‘American Dreams in China’ also had the same message, but the positioning here reeks of sheer insensitivity, so much so that you won’t be thinking of the romance by the time the movie is over.

On their part, Tse and Gao try to muster as much chemistry they have with each other against weak plotting and one-note characterisation, but ultimately neither their characters nor their relationship resonates as much as it should. There aren’t any strong supporting characters to speak of, which is why it is fortunate that the cinematography is excellent, so even though the story or the characters aren’t particularly engaging, the shots are always pretty to look at.

But of course, it takes more than a collection of beautiful shots to make a compelling movie, and ‘But Always’ falls way short of that - not only because it isn’t moving or romantic enough, but also because it wrings what goodwill it manages to muster on a conclusion that is clearly intended as political subtext. Right from the point An Ran leaves for America to the point she returns to Beijing, the film tries to be a cautionary tale for those still under the “illusion” that the West holds greener pastures, even going to the extent of exploiting one of the most tragic events in recent memory to underscore that point. Like we said, it is a film without sincerity, and some may say, also without integrity. 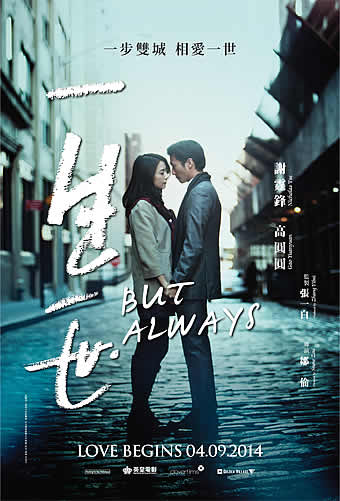