Synopsis:  “Blinded by the Light” is a joyful story of courage, love, hope, family and the unique ability of music to lift the human spirit. The film tells the story of Javed (Viveik Kalra), a British teen of Pakistani descent growing up in the town of Luton, England, in 1987. Amidst the racial and economic turmoil of the times, he writes poetry as a means to escape the intolerance of his hometown and the inflexibility of his traditional father (Kulvinder Ghir). But when a classmate (Aaron Phagura) introduces him to the music of Bruce Springsteen, Javed sees parallels to his working-class life in the powerful lyrics. As Javed discovers a cathartic outlet for his own pent-up dreams, he also begins to find the courage to express himself in his own unique voice.

There was a simpler time when our lives were shaped by the music we listened to. Remember how the melodies and lyrics of certain songs spoke to you so much, you felt that anything was possible in a world full of challenges? That was the power of music which we heard on the airwaves, or for some of us who could afford it – via cassettes and live concerts (this was before the age of digital streaming music was a norm).

For the protagonist of this film, the source of inspiration was American singer songwriter Bruce Springsteen. This is an interesting premise for the movie which set in the late 1980s, in the British town of Luton. You can expect drama and jokes involving the differences between the two cultures. What makes the film even more interesting is the ethnicity of the male lead. He is a British Pakistani Muslim teenager who is brought up in a family who treasures tradition. Expect more sparks to fly between the kid and his parents.

It is no surprise that this is the work of Gurinder Chadha, the English female director of Indian origin. Her past works, which include Bend It Like Beckham (2002), Bride and Prejudice (2004) and The Mistress of Spices (2005), is known to explore the identities of the Indian diaspora on screen. By packaging the stories as comedies and romantic dramas, Chadna’s films set a bigger stage for discussions on diversity.

Her latest work is no different. Based on journalist Sarfraz Manzoor's memoir Greetings from Bury Park: Race, Religion and Rock N’ Roll, it is essentially a story of a young boy whose life is changed after he discovers the music of who he deemed as a role model.

TV actor Viveik Kalra takes on the role of the protagonist, and being a relatively unfamiliar face in the industry, he does an excellent job of portraying a character who idealistically believes that his future is entirely in his hands (shame on us cynics), and his performance brings hope to anyone who is feeling a little down and out in life right now. He is joined by supporting characters played by Hayley Atwell, Rob Brydon, Kulvinder Ghir and Nell Williams.

There aren’t many surprises in the story written by Manzoor, Chadha and Paul Mayeda Berges. Plot developments you’d expect from a coming of age tale are all in place. Boy is inspired by music? Check. Boy’s father is against his behaviour and tries to get him to adhere to traditions? Yup. Boy goes against all odds, makes people understand him and a happy ending closes the movie? You bet. This is a good thing because the positive message and feel good factor of the film will spur us on in the right direction.

Even if you aren’t familiar with Springsteen’s music, this is a universal story that you will embrace. Some of the musician’s poignant lyrics are stylistically superimposed during key scenes, and they serve as timely reminders that with the right determination, anything is possible. You will walk out of the theatre feeling that you are ready to take on anything in life.

(Whether or not you are a fan of Bruce Springsteen’s music, you will cheer for the positive message that this film wants to convey) 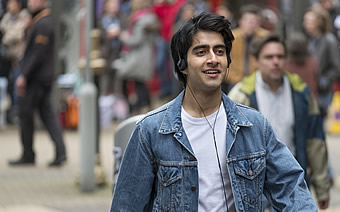 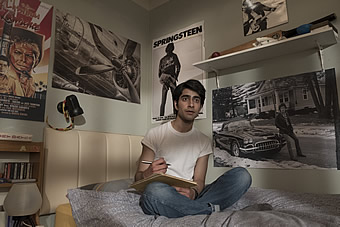 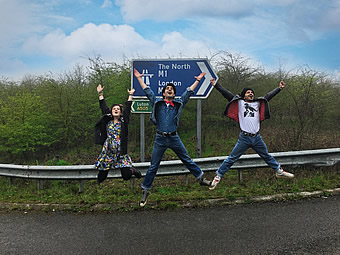