Synopsis: When mysterious spacecraft touch down across the globe, an elite team—lead by expert linguist Louise Banks (Amy Adams)—are brought together to investigate. As mankind teeters on the verge of global war, Banks and the team race against time for answers—and to find them, she will take a chance that could threaten her life, and quite possibly humanity.

In recent years, there has been the interesting trend of telling personal stories in the science fiction movies where the movies go beyond marvelling at the power of space travel or a post-apocalyptic future and instead using those backdrops as devices to examine humanity. Think “Gravity”, “Interstellar” and “The Martian”. Denis Villeneuve’s “Arrival” is the latest to jump onto this trend and, like its ‘thinking man sci-fi movie’ predecessors, will leave you thinking about the human spirit and the big things about life (I won’t spoil it for you but it will all build up and be unveiled in the final act).

While the entire cast is strong, this is clearly Amy Adams’ movie from the beginning to the end. As Louise, a linguistics expert who had earlier helped the military with a Farsi translation and now has to help the military communicate with aliens who have landed on Earth, Adam gives a performance that draws the audience in. Louise is an imperfect heroine who doesn’t possess superpowers and has her own darkness to deal with and to heal from. But her imperfection is what makes her human relatable. She is appropriately uplifting and sorrowful at times, moving you deeply at the film’s conclusion.

Generally well-paced, “Arrival” has a deliberate pace that matches Villeneuve’s gradual reveal of one layer of information after another. Like a blooming flower that slowly unveils its centre, audiences will get to appreciate the twist that is central to the movie’s narrative while drawing closer and closer to the movie’s true meaning as the plot evolves.  However, it does require patience for audiences to stay invested in the progress of the story and that can be a difficult task for those seeking instant answers, particularly in the middle of the movie where “Arrival” softens its pace and may become too saggy or even boring for some.  However, given that this movie was adapted and expanded from a short story to a full length feature film script, its lack of tightness in the middle of the movie is understandable and the epic ending makes the less-than-ideal pacing of the middle portion more than forgivable.

Adding to the realism of an unnatural movie is the element of geopolitics. Other than the USA, alien crafts hover elsewhere such as in China and Russia. The fear of powers other than the USA making the first breakthrough with aliens and using that knowledge against the USA is reflective of the mistrust in the bilateral and multilateral relationships between counties.

Cinematographer Bradford Young (of the famed “Selma” and “A Most Violent Year”) matches the soberness of the movie with elegant and stately shots. Young succeeds in making this unnatural story, about aliens landing on Earth and our attempts to communicate with them in a bid to decipher their intentions, feel perfectly genuine with his fluid shots and visions. Sequences, such as the one which shows Louise’s loss of a child, unfold smoothly and draws you in effectively within a short timeframe, much like how “Up”’s opening sequence drew audiences in without so much a word spoken.

Composer Jóhann Jóhannsson masterfully creates pieces that accentuate the emotional beat of every single act in this movie. The music heightens the tension in the first half of the movie and brings forth the touching undercurrents of the second half of the movie. The music, set design, cinematography, acting and direction are well done on their own but when put together, the end product is a well-executed vision that comes together beautifully thanks to the synergy between these different parts.

(“Arrival” is a movie that challenges, moves you and gets you thinking all at the same time; the success of the movie in doing that makes the 2 hours you invest in watching this movie well worth it) 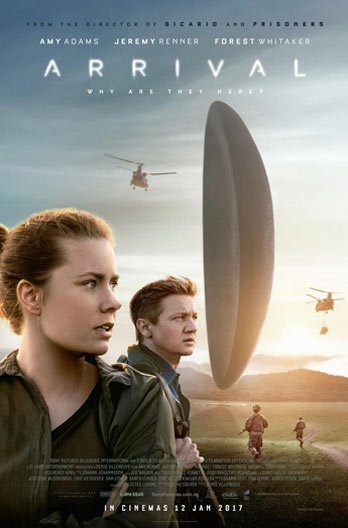