Synopsis: Deep into a solo voyage in the Indian Ocean, an unnamed man (Redford) wakes to find his 39-foot yacht taking on water after a collision with a shipping container left floating on the high seas. With his navigation equipment and radio disabled, the man sails unknowingly into the path of a violent storm. Despite his success in patching the breached hull, his mariner's intuition and a strength that belies his age, the man barely survives the tempest. Using only a sextant and nautical maps to chart his progress, he is forced to rely on ocean currents to carry him into a shipping lane in hopes of hailing a passing vessel. But with the sun unrelenting, sharks circling and his meager supplies dwindling, the ever-resourceful sailor soon finds himself staring his mortality in the face.

One man. Eight days. Adrift in a 39-foot sailboat in the middle of the Indian Ocean. You can’t get more minimalist than writer/ director J.C. Chandor’s sophomore feature ‘All is Lost’, a Hemingwaysque story that is diametrically different from his critically acclaimed debut ‘Margin Call’ as can be. Whereas the latter was a chatty Wall Street-set ensemble drama, there is just one nameless character here with virtually no dialogue who is cast away with no hint of human civilisation in sight.

Right at the start, we hear the Man’s voiceover, beginning with an apology no doubt intended for a family we never learn more of, attesting that he has strived in his life to love, to be good and to be right, and concluding that he had fought to the end. Cut back to a day and a week before, and we see Hollywood icon Robert Redford alone on board the Virginia Jean with a big problem. A shipping container floating in the open sea has rammed into the side of his yacht, flooding the cabin and short-circuiting the controls.

He doesn’t panic; rather, for the first 20 minutes, he goes about trying to free his yacht from the container and then steers around to get a better look at the object that is the cause of his calamity. Later on, he does a makeshift patch job, but even to the untrained eye, we know that it will hardly hold. His electronic equipment is ruined, so that means he can’t call for any help. And to make matters worse, a huge storm is brewing, the force of the wind and waves flipping the boat upside down and then up again as waters start pouring into the cabin from every conceivable direction.

Slowly but surely, we, like Redford’s character, recognise the futility of his circumstance as one by one, every possible line of hope or means of survival is lost. Following the storm, he has no choice but to abandon his wrecked ship for an inflatable life raft - alas, with no fresh water, dwindling rations and just a never-used, old-fashioned mariner’s sextant, there is only so much he can do against the considerable odds. And no, unlike Piscine Patel in ‘Life of Pi’ or Chuck Noland in ‘Cast Away’, he has neither a tiger nor Wilson the volleyball for companionship.

That is also precisely what differentiates Chandor’s movie from other similar survival-at-sea tales. In its stripped down state, it brings into sharp focus the true nature of the human condition - not just in its solitude, but in its exercise of wit, ingenuity and skill in order simply to live. Many may try to find something allegorical, metaphorical or (and especially after the ‘Life of Pi’) spiritual in the story, but we urge you to put aside such baggage and appreciate in its simplicity the intensity of a solitary hero’s perseverance against the sheer indomitable force of nature despite being weak wet and storm-battered.

And Chandor could not have found a better performer for this hero than Redford. Savvily tapping on his audience’s familiarity with Redford’s identity as the American golden boy of such classics as ‘Butch Cassidy and the Sundance Kid’ and ‘All the President’s Men’, Chandor taps on his one and only actor’s characteristic restraint and translates that into a showcase of virtuoso acting. Even though he only gets a smattering of words, there is no doubt ever about his character’s thoughts and emotions, written ever so clearly on his aged weary face. Every wince, every scowl, every frown and every squint is part and parcel of Redford’s superb performance, a one-man master class in the art of screen acting that is the multi-hyphenate’s best work in many years.

On his part, Chandor demonstrates an assuredness and clarity in his direction that ensures the proceedings never go aimless. With the help of his cinematographer Frank G. DeMarco, he keeps the camera trained squarely on Redford even within close quarters, losing none of his actor’s gripping acting triumph of pure behaviour and facial expression. It is to Chandor’s credit that the film never hits a false note - in fact, it feels so realistic that even Alex Ebert’s gentle score feels intrusive.

Yet this austere nature is also likely to win a fair share of critics, who will probably scoff at the movie as no more than an excuse to give Redford yet another acting accolade. There’s no denying that it is a movie that floats or sinks on the shoulders of one man and one man alone, but there is also no doubt that Redford carries the weight of the entire movie with intelligence and nuance. There is no grand drama to be found here; it is austere and spare, a model of pure existential cinema, a bold cinematic experiment that pays off tremendously. As unlikely as it may seem about the story of a man, a boat and the sea, we guarantee that ‘All is Lost’ will transfix you.

(A master class in existential filmmaking, this near wordless survival-at-sea tale built entirely around a single character is also Robert Redford’s finest hour as an actor of sheer magnetism) 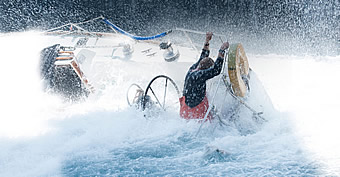 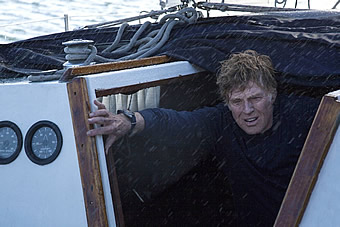 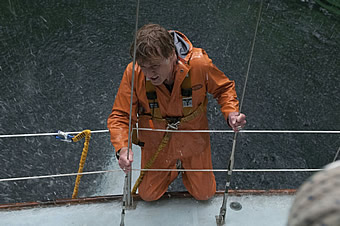 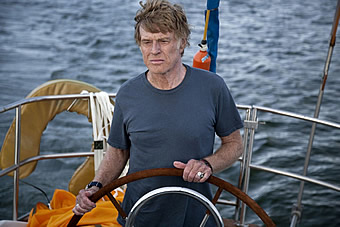