Synopsis: A WRITER’S ODYSSEY tells the story of Kongwen Lu (Dong Zijian), the author of a fantasy novel series following a heroic teenager, also named Kongwen, on a quest to end the tyrannical rule of Lord Redmane, under the guidance of a Black Armor (Guo Jingfei). But through a strange twist of fate, the fantasy world of the novel begins to impact life in the real world, leading Guan Ning (Lei Jiayin) to accept a mission from Tu Ling (Yang Mi) to kill the author.

When Hollywood goes big, the rest of the world follow. Not in the Covid-19 sense mind you but dumb loud CGI-filled spectaculars. The Korean film industry has done their fair share over the years and now the increasingly maturing China film industry is following suit. Lu Yang’s A Writer’s Odyssey is the latest to join the race after the box-office hit, The Wandering Earth and disasters liked Shanghai Fortress.

It takes a while to fully grasp the essence of A Writer’s Odyssey, it can be a bit confusing at first and takes way more explanation than the average movie. But the end result is definitely worth the wait.

The movie opens with a dishevelled man named Guan Nin (Lei Jiayin) who has spent the past six years looking for his missing daughter, nicknamed Little Tangerine. Shortly after, he is engaged by Tu Ling (Yang Mi), CIO of a famous technology company, Aladdin to assassinate a novelist, Kongwen (Dong Zhijian) as Guan possesses a “special” skill. In return, Aladdin will promised to help Guan search for his missing daughter.

And why must it be Kongwen, a down-and-out miserably young man who is hiding behind a mask scribing his unfinished novel? Because the owner of Aladdin, Li Mu believes that his life depends on the outcome of the character in Kongwen’s fantasy novel. Still with us at this point of time? Well, in Kongwen’s novel, a character named Kongwen is fighting against an evil warlord, Lord Redmane in an imaginative land where war is a daily affair. Along with an orphan girl named Little Tangerine and a blood-sucking creature living inside him, Kongwen must kill Lord Redmane to avenge the death of his sister.

How does all the above convoluted elements actually work in one single movie?

Does it works? In fact, it does if you can also accept the convenient fact that there are “mutants” living among us as well on earth. The story is structured around two worlds. A Writer’s Odyssey is a weird blend of reality and fantasy. First the one that has Guan trying all means to stalk and kill Kongwen and the second which is set in an ancient creepy world ruled by ruthless villagers, a mysterious Lord Redmane and his army of creepy crimson cavalrymen.

Some might deem the overall flick as excessive but the main core and theme of it is simply Guan’s endearing fatherly love or as what Dominic Toretto always say in Fast & Furious- family. Dong Zhijian and Lei Jiayin are such consummate performers that they are the main reasons to sit through this fantasy venture. Yang Mi who is usually known for her looks take on a tough gung-ho action-oriented role here. Together with Lu Yang and his team of writers, they seem to assemble all the right elements to tell both of the ongoing adventures. The movie has no issue juggling between what is real and what’s imagined. And to make everything cohesive in the end is no mean feat.

The movie surprisingly contains the right amount of narrative, exposition and action pieces to complement the constant onslaught of visual effects. The characters of Guan and Kongwen takes their time to establish their relationship without degenerates into nonsensical territory even though time is not on their side. There’s an obvious antagonist. Most important of all, there’s a clear-cut objective. The visual effects by MoreVFX Beijing are impressive as well, creating an atmospheric, carefully constructed imaginary world filled with drab and despair mirroring the fate of our protagonists.

While there are many CGI-filled titles out there that are low on substance and high on visuals, this is thankfully not one of them. The last act does erred on the overly indulgence side but that’s just a minor flaw that can be forgiven. A Writer’s Odyssey scores high with its rich production design, highly stylized well-done visual effects and enjoyable storyline. It's loud but not dumb. Perhaps producer Ning Hao (Crazy Stone) has a hand in steering the script as well.

(Reality and fantasy blends perfectly in A Writer’s Odyssey) 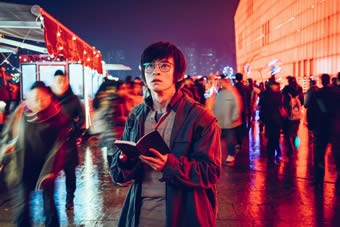