Synopsis: In the modern horror thriller A QUIET PLACE, a family of four must navigate their lives in silence after mysterious creatures that hunt by sound threaten their survival. If they hear you, they hunt you.

“If they hear you, they hunt you.” That about neatly sums up the high-concept survival horror from John Krasinski, a lean, mean and terrifyingly effective thriller that is viscerally and emotionally gripping.

Working off a nearly dialogue-free script that he co-wrote with Bryan Woods and Scott Beck, Krasinski imagines a post-apocalyptic Earth overrun by lethally fast extraterrestrial creatures that navigate and hunt by sound. In one of the most efficient prologues we’ve seen, Kraskinski introduces us to these large, skittering, carnivorous beasties while establishing the tragedy which would haunt the Abbott family whose fate we will follow throughout the course of the film. We won’t spoil it for you, but suffice to say that this event – which a title card informs us happens on Day 89, of what we presume refers to the number of days since the invasion – provides justifiable context why Lee (Krasinski) and Evelyn Abbott (Emily Blunt) have decided to bring another child into the world when we next catch up with them a year later.

Besides their impending newborn, Lee and Evelyn have two other children: a deaf teenage daughter named Regan (as is the actress who plays her, Millicent Simmonds, of the recent ‘Wonderstruck’) and a younger son Marcus (Noah Jupe). Not surprisingly, their everyday life consists of familiar yet different routines, including collecting fish from cages set along a nearby river, preparing dinner in a steamer under the floor, an after-dinner game of Monopoly using felt cutouts and fuzzy balls (instead of metal and plastic tokens) and communicating with neighbours using firelight after dark. Through immersing us in their minutiae, Krasinski succeeds not just in creating a rich, imaginative and simultaneously credible alternate reality but also in getting us to care for these characters in an intimate, personal and even profound way.

There are more than a couple of memorable scenes here: an impromptu dance between Lee and Evelyn with a shared pair of ear buds playing Neil Young’s ‘Harvest Moon’; a tense exchange between Lee and Regan as the former tries to get the latter to try on his latest makeshift hearing aid; and a learning expedition that Lee brings Marcus on which sees the boy’s initial fear and reluctance of learning the tricks of survival slowly melt away. Using both sign language and meaningful glances, the dynamics among the Abbotts are laid out clearly, succinctly and intently, complemented by some ingenious sound design that emphasizes the atmosphere of lived-in domesticity and omnipresent terror.

Less patient viewers may find the first half a little plodding, but that patience is well rewarded in a nail-biting latter half that features some unforgettable action sequences. The centerpiece finds Evelyn having to deliver her baby while dealing with two bugglies poking around the house by herself, after inadvertently drawing their attention following an incident with a nail on a stair tread. That is followed without pause by an encounter between Regan and one of the monsters in a cornfield, another with Regan and Marcus in a grain silo, and yet another with Evelyn and her baby in a flooding basement. Oh yes, when the aliens do catch up with the Abbotts, the tension, dread and sheer adrenaline rush is relentless, culminating in a payoff that literally and figuratively ends with a bang.

Neither of Krasinski’s previous directorial features have hinted that he would be a master of suspense, but the way he builds anticipation in cramped quarters is nothing short of masterful. But perhaps more importantly, this is one of those horror films where what happens to the characters matters to us, so as manipulative as they are, the character arcs which have been orchestrated for maximum catharsis hardly diminishes how poignantly we feel for what happens to them. In particular, Blunt’s keen portrayal of her character’s quiet resilience as well as Simonds’ exceptionally sensitive performance of her character’s grief, guilt and rebellion ground the emotional stakes compellingly, binding us powerfully to them as they go through the wringer.

Certainly, there’ll be cynics who cannot wait to point out the loopholes in logic and rationality, but ‘A Quiet Place’ should be enjoyed at face value for what it is – that is, a unique high-concept alien invasion horror that offers both visceral and emotional thrills. Never mind the classic conventions of jump-scares, out-of-focus background shots and hideous looking creatures, Krasinski employs the familiar in riveting ways, and none more so than that of building terror through silence. But it is by twinning it tightly with credible human drama that he truly elevates his movie beyond the gimmicky, and we dare say this will likely go down as one of the best horror films you’ll see this year.

(As viscerally thrilling as it is emotionally gripping, 'A Quiet Place' is high-concept alien invasion science-fiction executed with absolute brilliance) 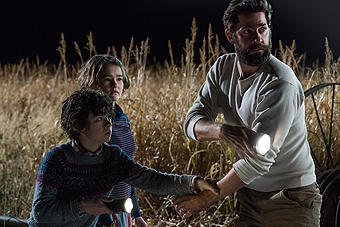