Synopsis: The critical and box office success of 77 Heartbreaks has led to the reuniting of cast and crew for this sequel, with the key term “heart breaks” changed to “heart burns”. This time the couple enters the graveyard of love -- marriage. The challenge facing Adam (Pakho Chau) is whether his love is enough for Eva (Charlene Choi) to achieve a happy ending!

’77 Heartbreaks’ was one of our favourite rom-coms of that year; unfortunately, we can hardly say the same of this lazy sequel. Though helmed and written the same team behind its predecessor, this follow-up is so haphazardly plotted that you’d wonder if director Herman Yau and writer Erica Li had been coerced into the effort by the studio after the critical and commercial success of the former.

Picking up a year after divorce lawyer Eva (Charlene Choi) ended her 10-year relationship with kickboxing coach Adam (Pakho Chau), it finds our lead couple still very much hung up over each other. While Eva recalls every now and then how her life used to be with Adam – such as how she would have to nag at him to remember to bring their passports before an overseas trip, or how he would help load her luggage into the back of a taxi to the airport – Adam would drive over to her mother’s place where she has moved back into hoping to catch a glimpse of her whenever she returned from work.

Neither though have mustered the courage to tell the other how much he or she still misses their time together; that is, until Eva’s mother Lin (Kara Wai) is admitted to hospital while Eva was visiting a close friend who had emigrated to London. As narrative coincidence would have it, Adam will end up caring for Eva’s mother while Eva is overseas, thus creating an excuse for them to meet in-person after Eva returns and consider if they would give each other another chance.

Whereas it was Adam’s relationship with a third party which complicated their reunion the last time round, this time it is Eva’s turn to create a similar difficulty. A chance run-in with Thai heartthrob Marvel (Mario Maurer) leaves the latter smitten with Eva, and when he has a run-in with the law, Marvel calls Eva for help to bail him out, setting the stage for a series of meetings that will see him profess his love for her even as he is fully aware of how tangled her feelings are with Adam.

Yet perhaps fearful of being accused of retreading old ground, Li, who had adapted the movie from her novel of the same name, decides to throw in unnecessary subplots that ultimately distract from the story of Adam and Eva. There is one of how Marvel is secretly an urban artist dubbed the ‘Space-Time Intruder’; there is another of Lin’s reunion with an old flame Poh-Wah (Lawrence Cheng); and there is yet another of how one of Eva’s wealthy but eccentric client N T Tang (C-Kwan) tries to win her affection despite her obvious disinterest.

It’s a lot going on at the same time, and ironically the plotting loses its focus on advancing the relationship between Adam and Eva, so much so that they almost become an afterthought in their own movie. You would expect for example that the 77 heartwarmings would represent the 77 times that Adam tries to woo Eva, in contrast to the 77 heartbreaks of the previous movie, but the title turns out to be no more than an application which Adam downloads to teach him how to be nice to Eva. What is worse is how the movie denies its fans of a happy ending for the couple, choosing instead to leave the door wide open for another sequel with Adam, Eva and Marvel in the same love triangle.

And by failing to take Adam and Eva’s relationship to any meaningful next level, ’77 Heartwarmings’ ultimately lets down fans of its predecessor undeniably looking for a satisfying happily-ever-after for the couple. Choi and Chau still bring the same chemistry to their roles, and Yau keeps the proceedings going at an efficient, if workmanlike pace, but Li’s writing lets all of them – as well as her audience – down. There is little heartwarming to be found in this sloppily written sequel, and in fact we’d even urge those who’d liked the first movie to avoid this follow-up that is less fulfilling than frustrating.

(Less heartwarming than heartbreaking, this sequel squanders the goodwill of its predecessor with its sloppy writing that almost treats its lead couple as an afterthought) 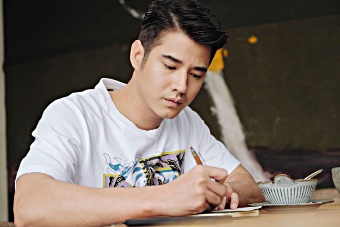